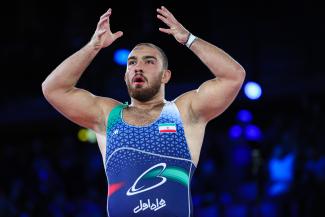 ALMATY, Kazakhstan (May 31) -- As he celebrated winning his first world title in Oslo last year, Amir ZARE (IRI) held up a virtual crown over his head, symbolizing that he is now the king of the heavyweight class.

This was two months after Gable STEVESON (USA) had left the world in awe by winning the gold medal at the Tokyo Olympics. He claimed that he was the king of the weight category after beating Taha AKGUL (TUR) and Geno PETRIASHVILI (GEO) en route to the gold.

Zare did the same in Oslo a bout between him and Steveson would settle the debate. But unfortunately, that is unlikely in the near future as Steveson chose professional wrestling.

He returns to competition after winning the title in Oslo at the Bolat Turlykhanov Cup in Almaty with an eye to win his second world title. Zare is aware of what it takes to make the Iran team and being pitched as the favorite to win the gold. But a confident start in Almaty can pave way for a fruitful year.

"Almaty is not everything," Zare said. "We have to return to Iran and be selected to the national team. I have to train harder." 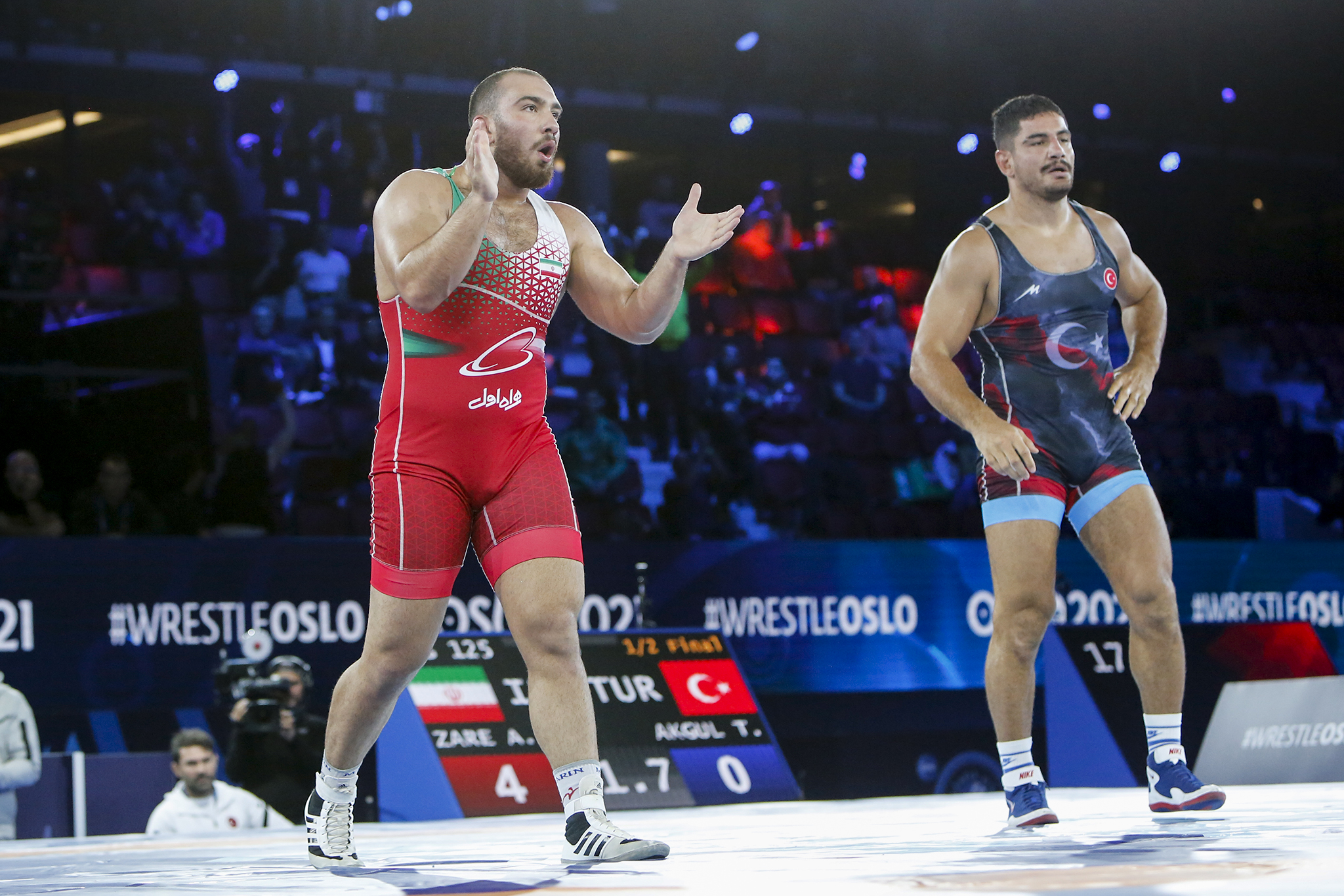 Long before he won the world title and the Olympic bronze in the same year, the U20 world champ made splashes in the wrestling world when he pinned Petriashvili in the Iran league in 2019. Fans wondered if Iran has found a world-beating heavyweight to replace Komeil GHASEMI (IRI).

Zare was young and had already won the U20 world title. But like most wrestlers, he had odd results that stopped fans from taking his name in the same breath as Hassan YAZDANI (IRI). At the Youth Olympics, he got pinned by Sergey KOZRIEV (RWF) in the final which gave rise to doubts about his potential.

But as the Tokyo Games approached, Zare became the dark horse and returned home with a bronze medal after losing to Petriashvili in the quarters. He avenged that along with beating Akgul at the Worlds.

Now as a world champion, he will be part of Iran's golden trio in Almaty. Initially doubtful for the tour due to injury, he is expected to win the 125kg weight class.

After skipping the Asian Championships, this is an opportunity for the third-ranked Zare to close in on the top two wrestlers — Akgul and Petriashvili and claim the top seed for the September World Championships.

"It's important to win and return," he said. "I will train under the best coaches and hopefully that will help me win the gold medal again at the World Championships." 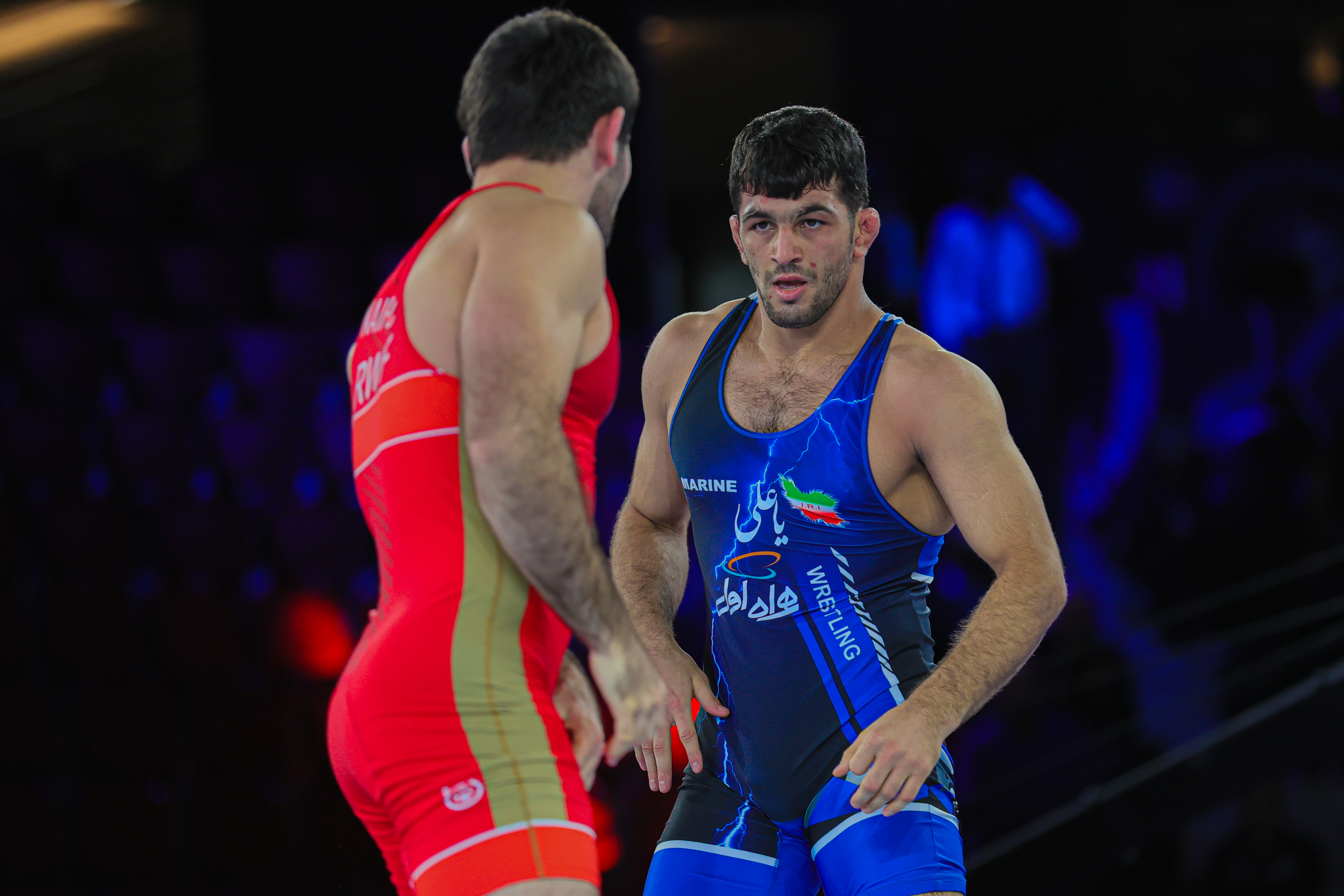 Yazdani and Kamran GHASEMPOUR (IRI) are the other two world champions who will be in action in Almaty.

At 86kg, Yazdani will be looking to overtake Taylor as the top wrestler in the weight class. The American Olympic champ has 88000 points while the Iranian is 1600 points behind.

He may have a rematch from the 2017 World Championships against Boris MAKOEV (SVK) in Almaty. But there are other challenges as well in Fatih ERDIN (TUR), Olympic bronze at 74kg Bekzod ABDURAKHMONOV (UZB), and local favorite and Asian champion Azamat DAULETBEKOV (KAZ) among others. 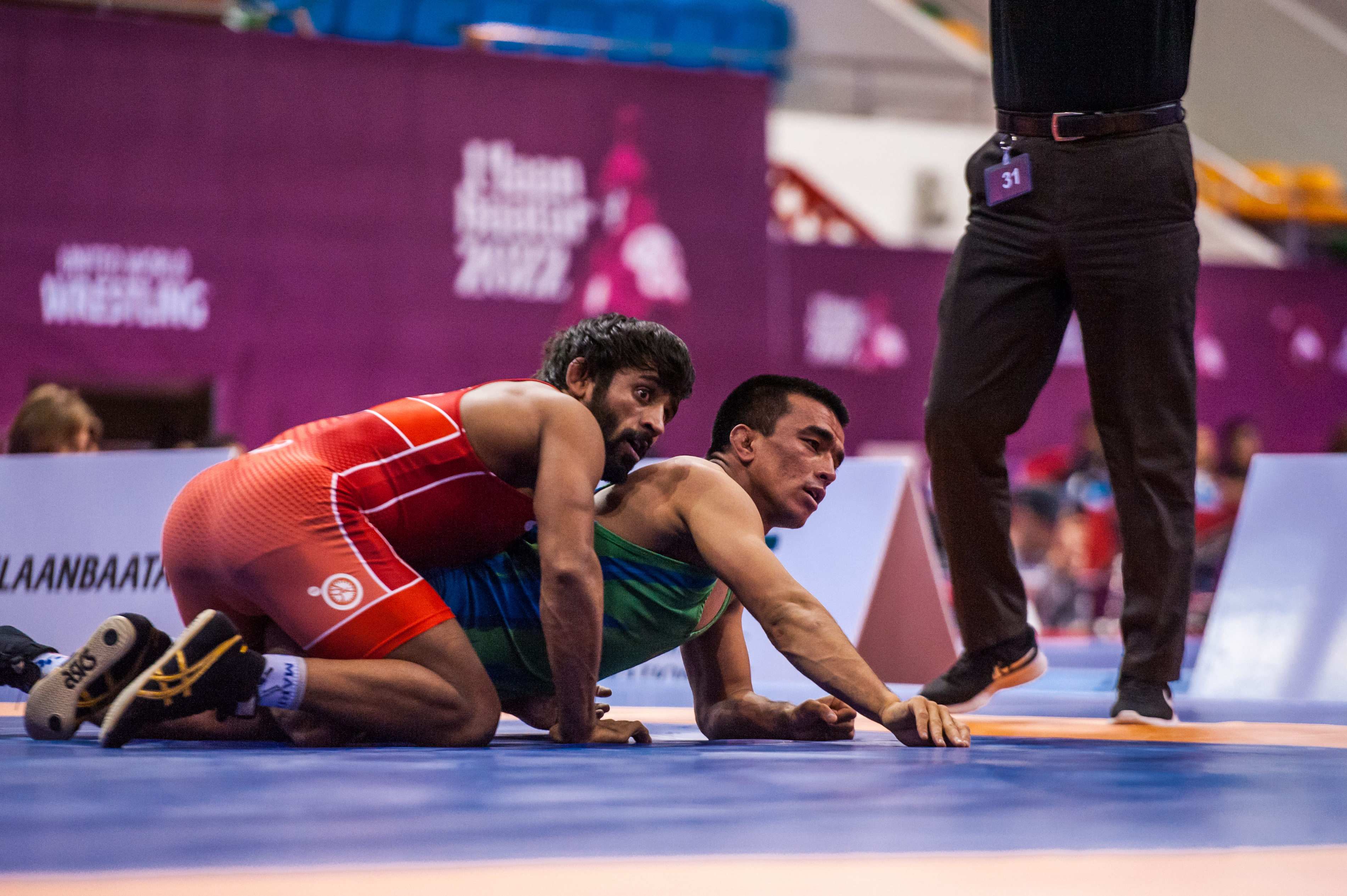 Bajrang PUNIA (IND) would look to move on from the loss of his Asian Championships as he won a silver at 65kg. He faces a familiar for in Tulga TUMUR-OCHIR (MGL) as the two are expected to fight for the gold in Almaty.

But Adlan ASKAROV (KAZ) will look to replicate his 61kg performances at 65kg as he continues to get familiar with the Olympic weight. Another young star is Umidjon JALOLOV (UZB). The former U17 world champ won a bronze in Istanbul and now has a chance to upgrade it. 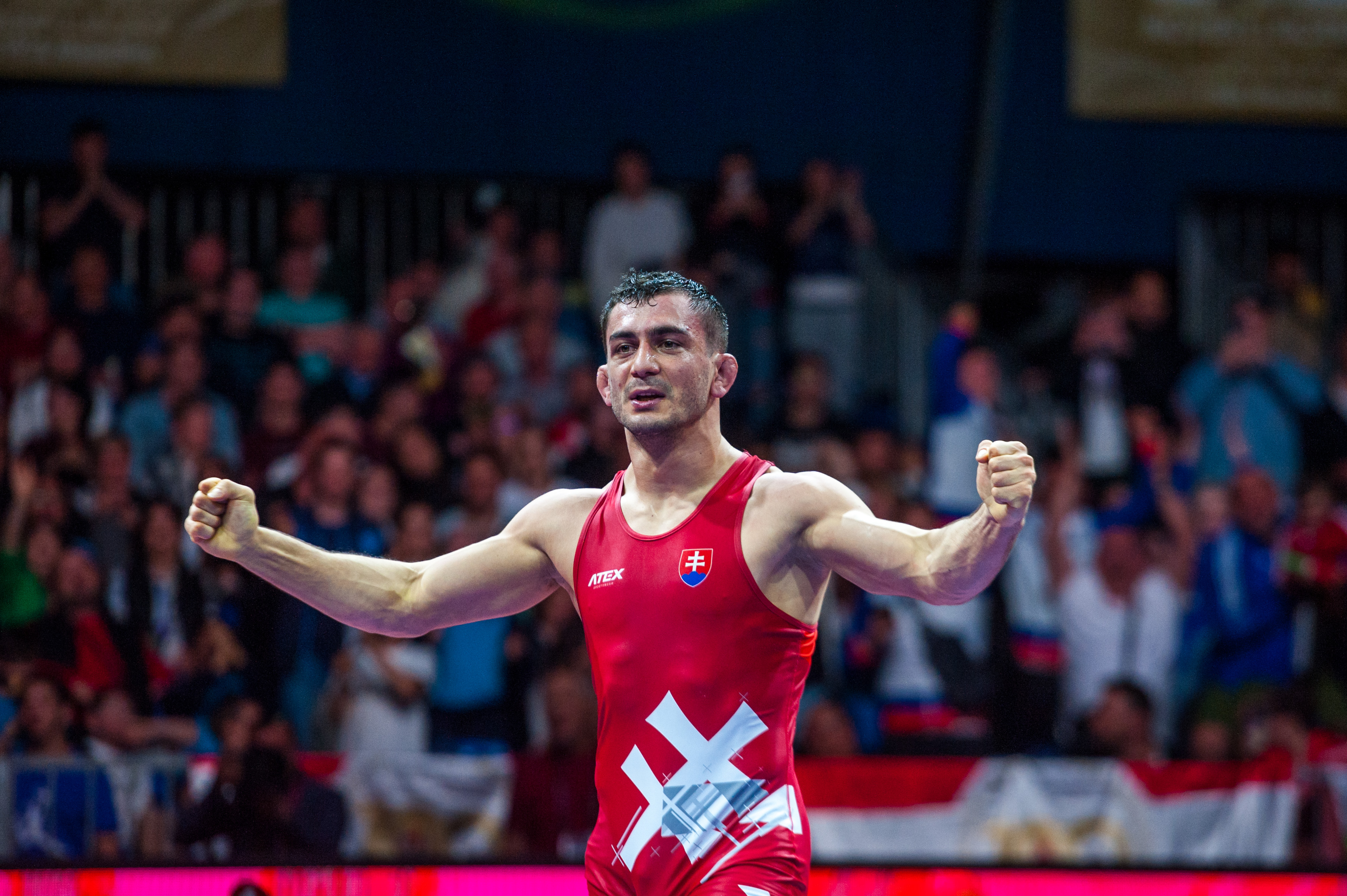 Expect some fireworks at 74kg as World silver and European champion Tajmuraz SALKAZANOV (SVK) is making a trip to Almaty. He had come back from 5-0 to win 6-5 against Frank CHAMIZO (ITA) in the European final in March.

Uzbekistan veteran Ikhtiyor NAVRUZOV (UZB) will try to stop him but given his recent struggles, Salkazanov should find it easy.

In an interesting move, U20 world champion at 92kg Amirhossein FIROUZPOUR (IRI) is moving up to 97kg in a bid to challenge Asian champion Mohammadhossein MOHAMADIAN (IRI). He won the Asian championships as well at 92kg last month.

But to be successful he needs to go through Batzul ULZIISAIKHAN (MGL) and veteran star Magomed IBRAGIMOV (UZB). Ulziisaikhan won silver in Ulaanbaatar while Ibragimov, 40, is making a comeback after missing out on a medal in Tokyo.

Ernazar AKMATALIEV (KGZ) may finally claim the top rank at 70kg after missing out in Istanbul and Ulaanbaatar. He failed to win the gold at both events keeping him below Zurabi IAKOBASHVILI (GEO) 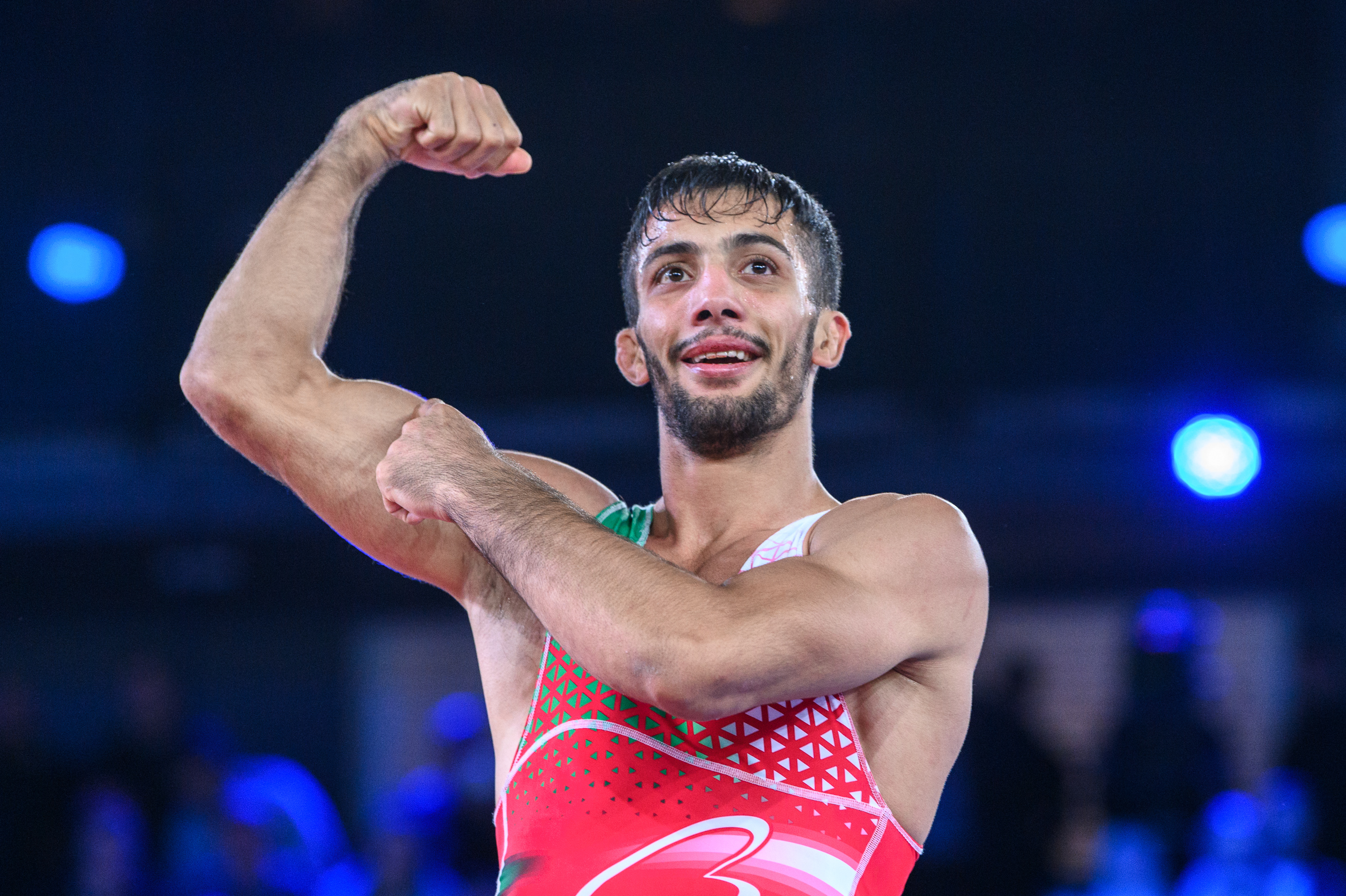 Iran also has a strong Greco-Roman team in Almaty as Olympic and world champion Mohammadreza GERAEI (IRI) will compete at the 72kg weight. He had won both titles at 67kg. Despite the change, it looks unlikely that he will return home without the gold.

He is replaced by another world champ at 67kg in Meysam DALKHANI (IRI). The 63kg gold medalist will try to replicate Geraei’s results at 67kg with an eye on the World Championships. It will interesting to see young Asian champion Meiirzhan SHERMAKHANBET (KAZ).

Another Iran match-up is at 60kg as both Pouya NASERPOUR (IRI) and Ali Reza NEJATI (IRI) are entered in the weight. In what is virtually the World Championships team trial, both are wrestling to be on the flight to Belgrade.

After struggling with injuries throughout last year, Kamal return with a golden performance in Budapest. If he can win in Almaty, it may well be the beginning of Kamal finally rising to his potential at the senior level.

Almaty will witness the wrath of Olympic silver medalist Akzhol MAKHMUDOV (KGZ) once again as he wrestles at 82kg. It was in Almaty last year that a high-flying Makhmudov qualified for the Olympics. He also enjoys a huge fan base in the neighboring nation.

But he will have to cope up with the challenges of 82kg and also face regulars in Pejman POSHTAM (IRI) and world silver medalist Burhan AKBUDAK (TUR).

A star-studded line-up at 130kg made this weight class UWW weight-to-watch at this tournament.