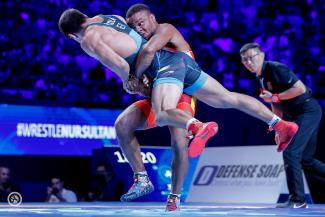 TOKYO, Japan (July 22) – Zhan BELENIUK (UKR) will look to improve on the Olympic silver medal he won at the 2016 Rio Games. He won gold at the 2019 World Championships in Nur-Sultan, which was his second world title after claiming gold in 2015. The 30-year-old Beleniuk has five world medals and four European gold medals. Earlier this year, Beleniuk won gold at the Grand Prix of Zagreb before getting a bronze at the European Championships in April. He enters the Tokyo Olympics as the No.2 seed at 87kg.

The top seed at 87kg is Viktor LORINCZ (HUN), a three-time world medalist. He will be in search of his first world-level gold in Tokyo. Lorincz reached the finals of the 2019 World Championships before falling to Beleniuk, 2-1. Lorincz was leading the match with just over a minute remaining before Beleniuk scored the go-ahead point off passivity, which proved to be the difference in the match. Lorincz was named United World Wrestling's Greco-Roman Wrestler of the Year in 2019 after he won gold medals in three Rankings Series events, as well as a bronze at the European Games, silver at the World Championships and gold at the World Military Games. He placed fifth at the 2016 Olympics, losing in the bronze medal match.

Denis KUDLA (GER) is one of the top contenders in this weight category despite not being seeded. Kudla is a two-time world medalist (bronze in 2019, silver in 2017) and earned a bronze medalist at the 2016 Olympics in Rio. Kudla fell to Beleniuk in the bronze medal match at the 2021 European Championships.

Third-seeded Rustam ASSAKALOV (UZB) brings a strong resume to Tokyo. The 37-year-old  Uzbekistani has won two world medals, with his most recent one coming in 2019 when he claimed bronze in Nur-Sultan. His lone loss at the World Championship came to Lorincz on criteria in the semifinals. Assakalov reached the finals of the 2015 World Championships in Las Vegas before falling to Beleniuk. Assakalov, who is competing in his second Olympics, is a multiple-time Asian Games finalist, winning gold in 2014 and silver in 2018.

Daniel GREGORICH HECHAVARRIA (CUB), a silver medalist at the Pan Am Olympic Qualifier, earned the No.4 seed. He is a multiple-time U23 world medalist, winning silver in 2018 and bronze in 2019.

Lasha GOBADZE (GEO) could be in the mix for a medal. He was a 2019 world champion in a non-Olympic weight category (82kg) and also took bronze at the 2015 World Championships.

Kiryl MASKEVICH (BLR) has had a strong season. He won the Individual World Cup in December before earning a silver medal at the European Championships, where he defeated Lorincz by technical superiority in the opening round.

Three-time European champion Zurabi DATUNASHVILI (SRB) will be competing in his third Olympics after qualifying by reaching the finals of the Last Chance Olympic Qualifier. Datunashvili had an impressive run to gold at this year's European Championships, earning victories over Beleniuk and Kudla before topping Maskevich in the finals.