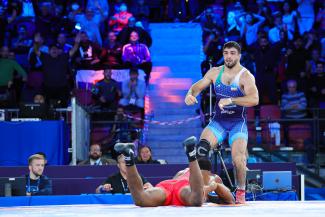 But it were the young wrestlers from Iran who stole the limelight on day two of the senior World Championships in Oslo, Norway as they maintained a perfect record and entere four wrestlers in the final out of the four weight classes in action.

Leading them was U23 world champion Kamran GHASEMPOUR (IRI) who stunned two-time defending world champion Cox 3-3 in the 92kg semifinal to the cheers of the Iran fans in the stadium. Alireza SARLAK (IRI) at 57kg, Amirmohammad YAZDANI (IRI) at 65kg and Mohammad NOKHODILARIMI (IRI) at 79kg also reached their respective finals in similar manner -- winning in the final few moments of their semifinals.

Burroughs made his fifth World Championships final, this time at 79kg -- a weight class he is wrestling for the first time in his international career. Wrestling YOSHIDA (JPN) in the semifinals, he gave up a stepout but bounced back with one of his own. A double leg takedown made it 3-1 for the American at the break. A stepout and go-behind combined with an exposure made it 8-1. He finished the bout with another takedown to win 10-1.

He will face the 2021 junior world champion Nokhodilarimi in the final. The Iranian kept him calm in a tense semifinal against Nika KENTCHADZE (GEO) and scored a step out in the final 10 seconds. Kentchadze had taken the lead 4-4 with 30 seconds to go but the Iran wrestler continued the pressure and ultimately got a 6-5 win to make the final in his first trip to the senior Worlds.

At 92kg, Cox defended for his life but Ghasempour managed to break his defence twice to win 3-3. Cox defends the life from quad-pod but Ghasempour managed to finally get the two points. The time used by Cox to defend the position twice came back to bite him as he ran out of time when the score was 3-3 and he got a stepout just when the time expired.

The senior Asian champion at 92kg will have Magomed KURBANOV (RWF) in the final. He began with a 1-0 via a stepout and added one more. But Osman NURMAGOMEDOV (AZE) got stepout and then added takedown to make it 4-2. Kurbanov hit a double and then an exposure to lead 6-4. A stepout gave him one more point and the match finished 7-4.

At 57kg, Iran had another close bout as Sarlak stunned world championships silver medalist Suleyman ATLI (TUR). He was called for passivity and gave up one point. Sarlak led 1-0 at the break but in the second period Atli scored a stepout to make it 1-1. The lead increased to 2-1 and then to 4-1 as he got a takedown on the edge. But Sarlak shot for two and then exposed Atli for two more. Atli tried a desperate attempt in the final second but failed and Sarlak got two more and finished the bout 7-4.

But he will face Tokyo bronze medalist Gilman who dismantled Horst LEHR (GER) after an early hiccup. Lehr began with a takedown outside the circle to lead 2-0. Then Gilman tried a stepout but it was Lehr who managed to counter it and lead 3-0. Gilman began the comeback with a takedown and then a four-point move. But a reversal and exposure to make it 5-5. Two stepouts for Gilman made it 7-5 at the break.

Lehr kept shooting in the second period but it was never enough as Gilman kept scoring and ended the bout 15-5 with 32 second remaining.

Yazdani will be going up against Zagir SHAKHIEV (RWF) in the 65kg final after he beat Alibek OSMONOV (KGZ) in the semifinal. In another close bout, Yazdani scored a stepout with five seconds remaining to win 5-4. He led 4-0 but Osmonov scored via a headlock exposure and then  a takedown to lead 4-4 with 32 seconds remaining. But gave up a feeling and caution to lose the semifinal.

The other semifinal was equally thrilling as Tulga TUMUR OCHIR (MGL) thought he should have won it but it was the RWF wrestler who managed win 4-4 on criteria. Tumur Ochir was exceptional in his defence again but after second a stepout and then a point for Shakhiev's passivity, he gave up a takedown and a exposure to trail 4-2.

But Tumur Ochir scored a takedown but was trailing on criteria which the Mongolian coaching staff did not agree with. They did challenge the call but it was little too late.

Final two freestyle weight classes plus two women's wrestling weights will be in action on the third day of the World Championships in Oslo with all eyes on Abdulrashid SADULAEV (RWF) and Kyle SNYDER (USA) at the 97kg.

Over the years, Jordan BURROUGHS (USA) has faced quite a few Russian Wrestling Federation wrestlers. He enjoys a great head-to-head record but since the onset of Zaurbek SIDAKOV (RWF) in 2018, he hasn't managed to win against them at the World Championships.

But Sunday was different. Burroughs managed to get past Radik VALIEV (RWF), thanks to his iconic double leg which he used to get four points in the second period. That gave him a 8-3 lead and the scores changed to 9-4 in Burroughs' favor at the end of the match, as he reached the semifinal of the 79kg weight class. The American four-time world champion is wrestling at the new weight for the first time in his career but nothing seemed to change in the way he wrestled and dominated throughout the competition.

Iran had the best morning session with four-out-of-four in the semifinals led by U23 world champion and senior Asian champion Kamran GHASEMPOUR (IRI) at 92kg. He has set up a semifinal against Cox who can well end his run here in Oslo. Alireza SARLAK (IRI) at 57kg, Amirmohammad YAZDANICHERATI (IRI) at 65kg and Mohammad NOKHODILARIMI (IRI) at 79kg also reached the semifinals to complete a perfect session for their country.

The Russian Wrestling Federation would be disappointed in their performance as only two wrestlers out of four on Sunday managed to reach the last four after Abubakr MUTALIEV (RWF) and Valiev suffered losses at 57kg and 79kg respectively. Zagir SHAKHIEV (RWF) at 65kg survived a scare against Rohit KUMAR (IND) in the pre-quarters winning 5-4 while Magomed KURBANOV (RWF) had a rather smooth sailing at 92kg. He will face Osman NURMAGOMEDOV (AZE) in the semifinal.

World Championships silver medalist Suleyman ATLI (TUR) put the disappointing first-round Tokyo Olympic exit behind him to reach the semifinal against Sarlak and now would like to make his second straight Worlds final. From the other side at 57kg, Gilman will face Horst LEHR (GER) with the former beginning as a big favourite.

Gilman faced Mutaliev in the first bout of the day and it was expected to be a slugfest but the American dumped Mutaliev with a quick pin in an anti-climatic finish. Gilman was close to winning his first bout against Zaur UGUEV (RWF) at the Olympics as well but gave up a takedown in the dying moments and ended up with a bronze. He will be looking to claim his second World medal as he has a silver from the 2017 World Championships. He lost to Yuki TAKAHASHI (JPN) in the final four years ago.

Atli had a great day as he began with a 10-0 win over PANKAJ (IND) before beating junior world champion Toshiya ABE (JPN) in the quarterfinals 5-2. He will be facing Sarlak after the Iran wrestler made a huge comeback from 6-2 to beat Aryan TSIUTRYN (BLR) 7-6 in the quarterfinals. Tsiutryn's loss ended the campaign for two-time World bronze medalist Bekhbayar ERDENEBAT (MGL) as he had lost 3-1 in the pre-quarters.

At 65kg, Shakhiev looks the favorite to win the Worlds now despite his close bout against Rohit. He had built a 4-0 lead but gave up two takedown to trail 4-4 on criteria. But he got a stepout when Rohit got his second takedown and claimed the lead 5-0. He managed to keep the lead and win.

He will face Tokyo Olympian Tulga TUMUR OCHIR (MGL) in the semifinal after the Mongolian defeated another Tokyo Olympian in Vazgen TEVANYAN (ARM) 2-1 in what was a solid display of defence from the Mongolian. He scored via a penalty point against the Armenian then scored a stepout. Tevanyan also got a point for Erdenebat's passivity but it was not enough.

USA's hopes at 65kg Yianni DIAKOHAMALIS (USA) will return home without a medal after he suffered a 5-1 loss to Tevanyan. The USA wrestler was looking for his attacks but the Armenian blocked everything that was thrown at him.

In the other semifinal, Yazdani will be up against Alibek OSMONOV (KGZ). The Iran wrestler was less than clinical in his bouts but managed to beat Krzysztof BIENKOWSKI (POL) 4-2 in the quarterfinal. Osmonov defeated Vasyl SHUPTAR (UKR) 5-3 in the quarterfinal.