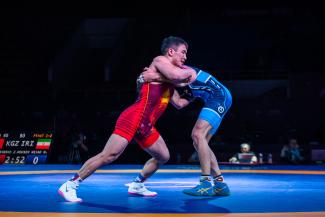 ULAANBAATAR, Mongolia (April 27) -- The Asian Championships crowned 10 Greco-Roman champions on the first two days. Kazakhstan won the team title with 190 points over Iran which had 176 points.

Kazakhstan won two titles, five silver medals and two bronze medals which helped them surpass Iran. The only weight class it failed to medal was 97kg in which the wrestler lost the bronze medal bout.

Iran had four gold, one silver and two bronze but they finished with 8 points in two weight classes which hurt their chances of winning the team title.

Here are the 10 Greco-Roman finals from the Asian Championships.