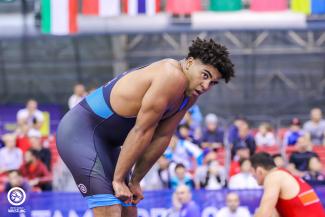 Steveson, the reigning three-time world champion will be looking for his fourth age-level world title. Since stepping on the international scene in 2015, Steveson has yet to drop a match on his way to claiming two Cadet World titles, and a Junior World gold medal.

The United States’ roster was scheduled to feature two of the three 2017 cadet world champions that were entered, but due to an undisclosed injury to Daniel KERKVLIET JR (USA), Aaron BROOKS (USA) will be the only American cadet world champion that is entered.

Iran’s Mehdi ESHGHIVASOUKOLAEI is the third cadet world champion that will be in action in Trnava where he’s currently entered at 61kg.