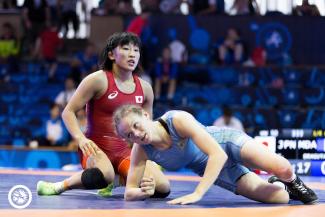 Susaki, the reigning Paris world champion only needed 43 seconds in her opening round match to pick up the 10-0 technical superiority victory over Mariana DRAGUTAN (MDA).

In the quarterfinals, Susaki trampled China’s ZHONG Yumei (CHN), 10-0, grabbing the 53-second technical superiority win. Through two matches, Susaki has been on the mat for a total of 99 seconds and has outscored her opponents 20-0.

She then moved to the semifinals with a 10-0 win over Rihem AYARI (TUN). In the semifinals, Velieva will wrestle Korea’s PARK Hyeonyeong (KOR).

Women's wrestling semifinals begin at 17:15, and will be followed by the Greco-Roman finals which begin at 18:00.