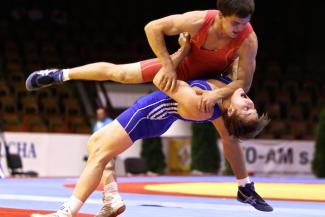 Lipasti, who was 15th at the European meet in June, battled his way into the final and promptly fell behind when his bodylock and throw misfired and Luka ORLOV (KGZ) landed on top for two points.  In the second period, Lipasti forced a chance in par terre to knot the score 2-2 and then received a late leg penalty point for the win.

The remaining five categories in Greco-Roman will be contested on Wednesday, July 16.

A late leg penalty capped a seesaw second period and gave Joni KHETSURIANI (GEO) an 8-7 triumph over Aghaniachari MOHAMMADREZA (IRI). Wrestlers traded four-point throws and then went back-and-forth until the Asian silver medalist’s leg tackle cost him the bout and the gold medal.

In the bronze medal bouts, European champion Aleksander GRUSHIN (UKR) went behind Asia No.3 Alisher TUEGANOV (KAZ) midway through the first period and hit four straight gut wrenches for the technical fall, 10-2, at 1:39.

Havard JORGENSEN (NOR), seventh place in the European championships, hit an arm throw early in the second period for four points on his way to a 5-1 win over Vijay VIJAY (IND).

Europe No.2 Ekrem OZTURK (TUR) opened with a quick headlock and pressed European bronze medalist Mehmed Hasan SEVGIN (BUL) for the fall only 39 seconds into the bronze medal bout.

Kerim KAZAKBAEV (KGZ) broke open a tight bout with a headlock in the second period and then wrapped up the bronze medal with a bodylock takedown for a 12-4 win at 3:54 over Sebastian NAD (SRB).

Arslan ZUBAIROV (RUS), getting his first at the world championships, forced a pair of leg penalties in par terre to defeat European bronze medal winner Parviz NASIBOV (UKR) by disqualification at 1:54. In two chances in par terre, Zubairov cinched up a tight waistlock and Nasibov could only prevent being turned by hooking his leg around Zubairov’s.

Asian champion Keramat ABDEVALI (IRI) scored two from par terre in the first period and held on against Malkhas AMOYAN (ARM) for a 2-1 win a bronze medal.

Irinel BOTEZ (ROU) converted with his par terre chance in the first period and Denis BOLUNOV (EST) could not in their bronze medal match-up as Botez won 2-0.

Two-time Nordic cadet winner Matias LIPASTI (FIN) received a leg penalty call on an attempted bodylock takedown by Luka ORLOV (KGZ) in the closing seconds of their championship bout to go from No.15 in Europe to world champion with a 3-2 victory.

European silver medalist Arman BAGHDASARYAN (ARM) scored a force-out in the first period and made it stand for a 1-0 win over Titas KERSEVICIUS (LTU) and the second bronze medal.

In a battle of European bronze medalists, Arsen SYCHOV-BOPAMBE (BLR) rolled up an 8-0 technical fall over Oleg AGAHANOV (RUS), while Asia champion Roman KIM (KGZ) stepped over a gut wrench attempt by Radoslav GEORGIEV (BUL) and held for the fall at 1:31.