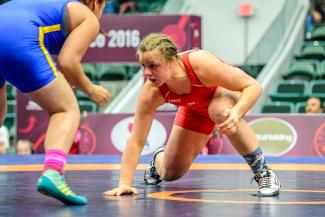 In women's wrestling, Canada, Nigeria, and India dominated the field at the 2014 Commonwealth Games in Glasgow, Scotland winning all seven of the gold medals.This year, six of the seven champions including Olympic champion No. 8 Erica WIEBE (CAN) return to the Commonwealth Games with hopes of repeating as gold medalists.

Returning champion and Asian silver medalist Vinesh VINESH of India is currently ranked No. 2 in the world and is expected to compete for the gold medal at 50kg.

The trio of African champions hailing from Nigeria are among the top contenders at the next three weight classes.

At 53kg, 2018 African champion Bose SAMUEL (NGR) is currently ranked No. 6 in the world and is the frontrunner to win the gold medal. But first, she’ll have to get through a returning champion Babita KUMARI (IND) and a pair of 2017 world team representatives in Carissa Jane HOLLAND (AUS) and Diana WEICKER (CAN).

The duo of returning champions in No. 7 Odunayo ADEKUOROYE (NGR) and No. 9 Aminat Oluwafunmilayo ADENIYI (NGR) will look to pick up where they left off at the 2018 African Championships where they were crowned champions.

Current world No. 2 Danielle Suzanne LAPPAGE (CAN) and No. 4 Blessing OBORUDUDU (NGR) will most likely battle in the 68kg gold-medal bout. Lappage, a 2016 Olympian is the returning champion at this weight class. This will be Oborududu’s third time wrestling at the Commonwealth Games. She's finished with a medal twice, but never one that was gold.

Korey JARVIS (CAN), the 2016 Olympian and 125kg favorite is one of two champions who return from the 2014 Games. Also returning is 74kg favorite and two-time champion, Kumar SUSHIL (IND). Although three other finalists in Bajrang BAJRANG (IND), Jevon BALFOUR (CAN), and Ebikewenimo WELSON (NGR) come back with hopes of bettering their performance from four years ago.

At 57kg, the veteran and two-time finalist No. 10 Ebikewenimo WELSON (NGR) returns to his third Commonwealth Games with hopes of avenging his loss in the African finals against No. 6 Jan Louwrens COMBRINCK (RSA).

A potential top-five match-up could be brewing at 65kg with 2014 runner-up and this year’s Asian bronze medalist, No. 4 Bajrang and No. 5 Amas DANIEL (NGR), 2018 African champion.

Headlining 86kg is Nigeria’s Melvin BIBO who is currently ranked No. 2 in the world. This is Bibo’s second appearance at the Commonwealth Games. In his first appearance, he finished as a bronze medalist at 74kg.

Three top-15 wrestlers from African nations are set to clash at 97kg. No. 5 Martin ERASMUS (RSA), No. 9 Soso TAMARAU (NGR) and No.13 Cedric Yvan NYAMSI TCHOUGA (CMR) capped off the African Championships with gold, silver and bronze medal performances respectfully. Of these three, Olympian Soso Tamarau is the only wrestler with prior experience. Bibo did not medal at the 2014 Commonwealth Games as he finished in fifth-place. 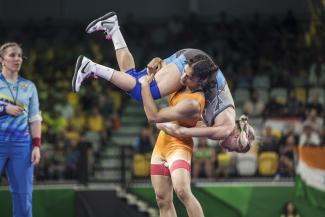 In her fourth and final bout of the day, the defending champion had hopes of taking out 2012 world champion Jessica Anne Marie MACDONALD (CAN). The No. 2 ranked wrestler in the world struck first with a feet to back double leg for four points, facing MacDonald with her first deficit of the tournament.

The Indian sat on a comfortable 8-0 lead after a second aggressive four-point double leg. The African runner-up used a MacDonald double leg attack to get her hips committed and picked up a counter two points, but not before MacDonald came out in the top position with a reversal.

Vinesh’s final leg attack came with 90 seconds left, as she picked up her second Commonwealth Games gold medal in as many tries.

In the finals, Inam took the lead midway through the first period after Bibo failed to score when he was placed on the activity clock. Shortly after, Inam turned defense into an attack with a crotch lift off Bibo’s attack, taking the 3-0 lead. An additional takedown and an unnecessary hands to the face call would make Inam switch to defensive mode as he had a six-point buffer.  The Pakistani closed the match out intelligently and found ways to stay off the activity clock to keep the shutout intact, winning 6-0.

Meanwhile, the 62kg gold-medal bout between Aminat ADENIYI (NGR) and Michelle FAZZARI (CAN) was halted after the first five seconds due to an apparent right knee injury to the Canadian wrestler.

Adeniyi, the 24-year-old Olympian and three-time African champion snatched an early single leg, only to have the 2017 world bronze medalist, Fazzari stop wrestling and begin to favor the already padded right knee. For the third straight international competition, Fazzari would have to pull out due to this apparent right knee injury.

Sumit SUMIT (IND) was awarded the 125kg gold medal after knocking off defending champion Korey JARVIS (CAN) and finishing the day with a 4-0 record. Jarvis ended the day with one loss and took home the silver medal, and Tayab RAZA (PAK) had a pair of wins and losses and departed with Commonwealth Games bronze.