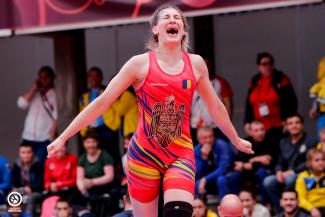 In the semifinals, Nitu surrendered the first takedown of the match, but never trailed after giving up that first takedown. Nitu scored back-to-back counter-offensive takedowns and grabbed the 4-2 lead. The Romanian gave up a stepout shortly before the first period ended and carried the 4-3 lead into the second period.

After the break, Nitu stopped another shot attempt from Zakharchenko and scored her third takedown of the bout, extending her lead to 6-3. Nitu’s lead was cut to a point after Zakharchenko scored her second takedown; but that was only short-lived, as Nitu’s fourth takedown extended her lead to 8-5.

The match got interesting with 15 seconds left when Nitu gave up a four-point inside trip and trailed 9-8. Shortly after awarding the four points, the referees came together and changed the call, giving two instead of the four. The change in points meant Nitu still had the 8-7 lead. A failed Russian challenge gave the Romanian her ninth point and the two-point lead.

Nitu back peddled and surrendered a stepout as time expired, but held on to the 9-8 upset victory.

Nitu will meet Belarus’ two-time European champion Anastasiya Zimiankova in the gold-medal match. The Romanian’s win stopped a rematch of the 2019 U23 European finals between Zimiankova and Zakharchenko, which was won by the Belarusian.

The Friday night finals begin at 18:00 (local time) and can be followed live on www.unitedworldwrestling.org. 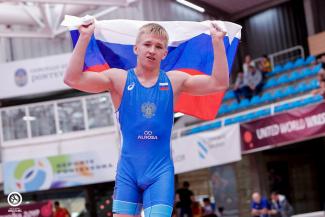