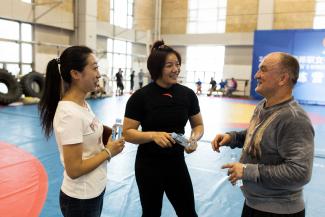 TAIYUAN, China (June 20) – On the eve of hosting its first competition in six years, the Chinese women’s national team, once relegated to silver linings, is poised for a breakout season.

Why such a golden outlook?

First came the appointment of a new president for the Chinese Wrestling Federation, Mrs. ZHANG Xia, a longtime referee and 1991 world champion at 62kg. Next, former Azerbaijan head women’s head coach (and native Bulgarian) Simon ATANASOV was hired to help run the nation’s powerful women’s program. Finally, and most importantly, the women on the Chinese team did what all great teams must do to win: they bought into the process.

“The federation wanted change and I’ve always wanted to coach a nation that can be the best in the world,” said Atanasov. “The Chinese are very tough and with good coaching they can be the top team in Asia and the world.”


Chinese wrestlers tie-up during a practice session Tuesday as they prepare for this weekend's China Open (Photo: Max Rose Fyne)

Between Team China and world supremacy is a Japanese women’s program that has become synonymous with golden success. Since 2004 the island nation of 130 million people has accounted for an astonishing 11 of the possible 18 Olympic gold medals in women’s wrestling.

But in 2018 there are signs that the Chinese women are absorbing lessons from their new coach - putting on record-breaking performances at the Ivan Yarygin and Asian Championships along with a runner-up finish at the World Cup. “We’re trying to overthrow Japan and to do so we need to focus on teamwork,” said PANG Qianyu. “We also have to continue to study the sport and analyze their skills and techniques.” 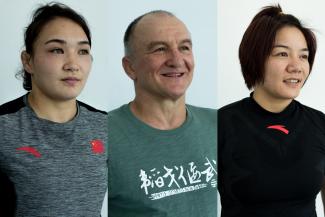 The techniques and teamwork have been Atanasov’s focus since arriving in at the National Training Center in Beijing last year. Though geographical circumstances divide the national team into two distinct groups (Hubei/Shanxi on one side, Liaoning on the other), Atanassov sees a growing comradery and commitment to learning techniques.

“These girls feel a sense of pride for each other,” said Atanasov as he prepared wrestlers for the China Open. “They have big hearts for competition and I see every day their technique is much better.”

The dedication of the coaching staff is mirrored by the devotion of the athletes to a new idea of how high they can reach as a team. “Chinese wrestlers are more confident than we were before, and our confidence grows every time we compete,” said 2018 Asian Champion, ZHOU Qian (CHN). “We are building stronger.”

Ivan Yarygin bronze medalist, PALIHA Paliha added, “Coach Atanasov encourages us not to be afraid to make mistakes when we compete. He tells us not to fear, but to be confident.”

The 2018 Asian Championships proved to be a major stepping stone for Team China’s quest for validation of their accomplishments. Where the nation of 1.4 billion had only captured a single gold medal in 2017, the team returned from their 2018 exploit with five gold medals – half the available top spots.

According to Zhou the seeds of confidence were nurtured by “a new coaching staff bringing new concepts to practice. They come up with unique ways of keeping us engaged – even when we’re tired.”

The China Open is certain to be another success for the Chinese women. With their top wrestlers competing and as many as three wrestlers entered per weight category the medal stand will likely be a sea of red. Adding to the level of competitiveness, a carrot for some competitors that a gold medal will punch their ticket to the prestigious Asian Games in Jakarta this August.

“I know they will compete hard at the tournament, because they have a lot of pride, but I will be looking for techniques,’ said Atanassov. “We have a world of opponents.”

Zhou, who took world silver in 2015 said no matter who is in the top spot Team China’s focus is renewed and turned inward.

“We do not do our best to overcome another country,” she said. “We look to become stronger for ourselves, and hopefully with that we will be at the top.” 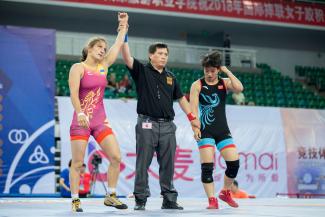