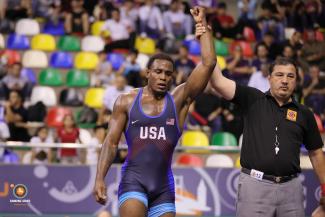 13:28: That'll do it for our morning session. We'll see you back here at 18:00 (local time) for the start of Wednesday night's medal matches. Until then, so long, wrestling fans.

13:16: What a great match between Kumar RAVI (IND) and Reza ATRINAGHARCHI (IRI) on Mat A! Ravi won the match 7-4, but it was a six-minute battle between the two Asian stars!

12:41: After these matches wrap up, we'll roll right into the semifinals.

12:24: Iranian big man Amir ZARE (IRI) is coming up next on Mat A. This is his first international competition since he won last year's Matteo Pellicone Ranking Series gold medal.

12:18: That was one heck of a match! Together, the pair put up 13 points, but Muszukajev held off Diakomihalis, 7-6, and moved into Round 3 where he'll take on Eduard GRIGOREV (POL).

11:53: DROP WHATEVER YOU'RE DOING! Muszukajev and Diakomihalis are wrestling on Mat A. It'll be a rematch of the '19 Yasar Dogu.

11:13: Good morning, wrestling fans! Today's action is going to be filled with stars mixing it up on nearly every mat. The first big match of the morning is coming up on Mat A in four matches. Hungary's world bronze medalist Iszmail MUSZUKAJEV will wrestle John Michael DIAKOMIHALIS (USA) in a rematch the '19 Yasar Dogu.

If you remember that match, Muszukajjev led that early but Diakomihalis stormed back to steal the win.