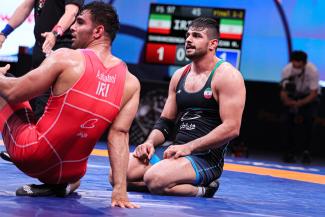 WARSAW, Poland (June 8) -- Mohammadhossein MOHAMMADIAN (IRI) had to wait until the final bout of the day but it was worth it as he successfully captured the gold medal at the Poland Open Ranking Series event in Warsaw.

The value of this gold medal increased as he also won the right to represent Iran at the Tokyo Olympics after beating two of his compatriots during his title-winning run on Tuesday.

Iran is treating the Poland Open as a selection tournament for the three freestyle and one Greco-Roman weight classes.

At 97kg, Mohammadian captured the spot after he beat Alireza Mohammad KARIMIMACHIANI (IRI) and Ali Khalil SHABANIBENGAR (IRI) with little separation in both the bouts.

“Thank God I was able to win,” Mohammadian said. “This is not the biggest day for me but I am happy.”

Apart from Iran's selection, the Tokyo seeds were confirmed in three weight classes as the final ranking points for 57kg, 86kg and 97kg were finalized on Tuesday.

Mohammadian's gold may not have been enough for a seed in the weight class at the Olympics, but it ended a long wait of Iran finalizing the wrestler at the weight. He won the quota in dominating fashion at the Asian Olympic Qualifiers in April.

But Shabanibengar's wins over him earlier this year and Karmimachiani's record at 92kg made them contenders as well. Instead of hosting a trial back home, the Iranian Federation decided to send the wrestler to Warsaw for a face-off. The winner would be selected for the Olympic team.

The stage was set when Karimimachiani and Mohammadian were drawn on the same side while Shabanibengar was split to the upper half. Mohammadian began with an 11-0 thrashing of Kollin MOORE (USA) in the qualification, while Karimimachiani overcame Abraham de Jesus CONYEDO RUANO (ITA), 11-1, in the quarterfinal. Earlier in the day, the Italian upset Olympic champion Sharif SHARIFOV (AZE) for a 2-2 criteria win.

Mohammadian's 10-0 win over Serik BAKYTKHANOV (KAZ) put him in the semifinal. He began with a takedown and secured a 2-0 lead. Karimimachiani's one point for passivity and a step out tied it 2-2, but Mohammadian held the criteria to set up a final against Shabanibengar.

It was anti-climatic as both wrestlers played it safe. They exchanged a point each for passivity but it was Mohammadian who was awarded one in the second period which gave him the win.

“I have been wrestling with Shabanibengar since cadet-level and I know his style,” he said. “Before becoming here I had strategized a lot and thankfully it paid off.”

Micic, who came into the tournament at the third-seeded wrestler for the Tokyo Olympic Games, passed second-seeded Sueyman ATLI (TUR) for the second spot in Tokyo.

“I felt really good today,” he said. “At this tournament, I just wanted to get my weight down to 57kg and go to the Olympics after a strong competition. The gold medal is always a boost in confidence.”

“I wasn't sure about the seeds so it was better to just compete,” he said. “I have a lot of confidence in my ability and it doesn't matter where I am seeded. I will have four tough matches in order to win at the Olympics.” 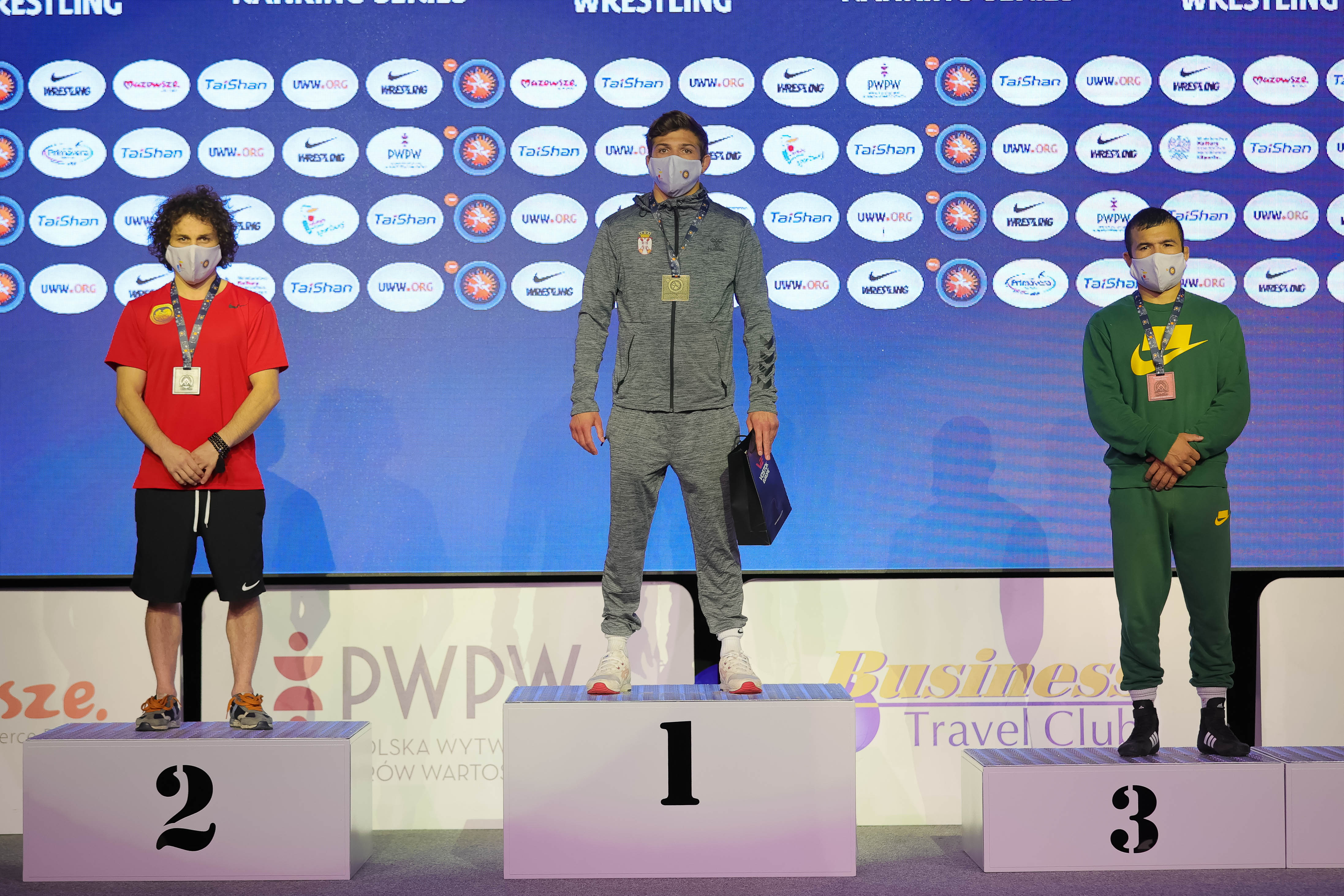 “I started off a little bit slow but I am happy with how I ended it,” he said. “More offense, more takedowns is what I am looking for.”

Valencia survived a scare against local boy Sebastian JEZIERZANSKI (POL) and won 6-5 before an injury default by world silver medalist Deepak PUNIA (IND) gave him a spot in the semifinal. Myles AMINE (SMR) was up next in the semifinal but Valencia had an easy 7-1 win.

In the 86kg finals, Zahid VALENCIA (USA) claimed his second Ranking Series title with a 10-0 trouncing of Georgia’s Sandro AMINASHVILI (GEO). The bleach blonde-haired American scored five first-period takedowns and ended the match less than two minutes into the finals.

But with David TAYLOR (USA) going to the Olympics, it was just the points for Valencia but not for the Olympics.

“[I am looking for] experience,” he said. “I am still young and could not make the Olympic team this year. It is still a goal of mine. I wanted to get matches and see how foreigners wrestle.”

The close first bout did upset Valencia but he is keen on working on his skills to not give up easy points.

“I got taken down,” he said. “I was working on my offense and defense. I did not want to over wrestle and expose myself.”

Also at 86kg, Myles AMINE (SMR) beat Sebastian JEZIERZANSKI (POL) in the bronze medal match and leaped Artur NAIFONOV (RUS) for the No. 3 seed at the Olympic Games.

Amine came into the competition with 40 points -- seven points behind his Russian nemesis -- but used his ten-point bronze medal to move to the opposite side of the bracket as top-seeded Olympic champion Hasan YAZDANI (IRI).

The Olympic seeds at 86kg are Yazdani), Punia, Amine and Naifonov, respectively.

Another American with a big day was Alec PANTALEO (USA) who plowed his way to a fourth consecutive gold medal with a career-defining win over three-time world champion Haji ALIYEV (AZE), before capping things off with a win over rival James GREEN (USA) in the 70kg finals. 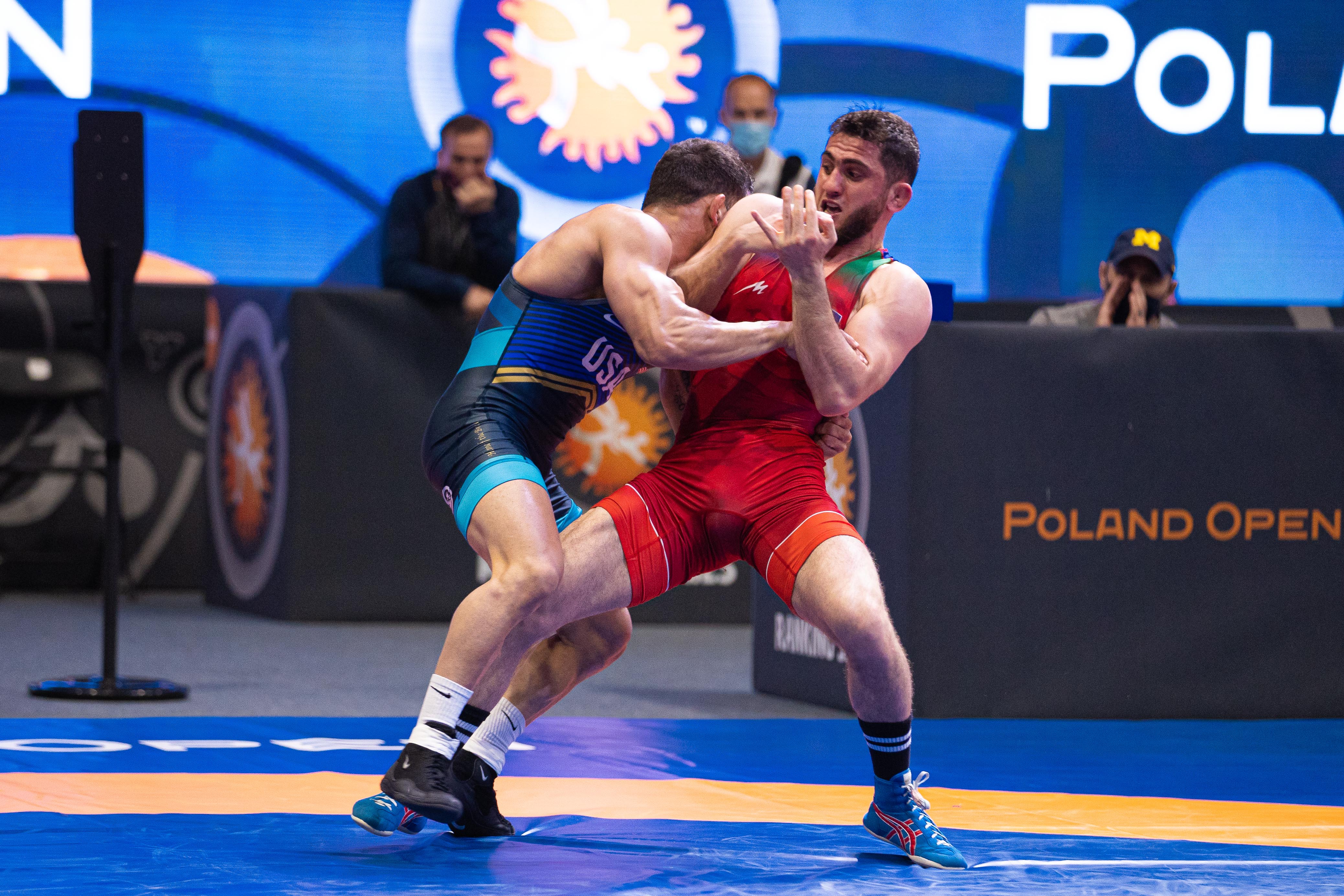 In the semifinals, Pantaleo cruised out to an early 6-1 lead over Aliyev thanks to a takedown and a four-point move. But the Azeri clawed back in the second period and tied the match, 6-6. The American’s first-period fought off a late flurry of attacks and used his four-point move to push himself into the finals.

In the gold-medal match, Pantaleo jumped out to an early four-point advantage against two-time world-medal winner James Green. He scored both early takedowns on head inside single legs to Green’s right leg. Pantaleo surrendered a takedown and a stepout in the second period, but hung on to win his fourth consecutive competition, 5-3.

At 79kg, Akhsarbek GULAEV (SVK) scored a last-second takedown to beat veteran Rashid KURBANOV (UZB) 2-2 in the final and claim the gold medal.