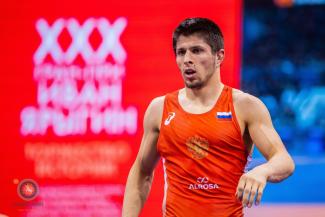 KRASNOYARSK, Russia (January 24) - The Russian Federation dominated the opening day of the “Toughest Tournament in the World,” Ivan Yariguin, and qualified eight wrestlers for the finals at each of the opening day’s three freestyle and four women’s wrestling weight categories.

The reason the Yariguin is often referred to as the “Toughest Tournament in the World” is that the road to the finals often travels through a world medalist or sees several Russian-on-Russian showdowns.

That was the case for two-time world champion Magomedrasul GAZIMAGOMEDOV (RUS), who will square off against Mongolia’s two-time world bronze medalist and Rio Olympian GANZORIG Mandakhnaran (MGL) for the 70kg gold medal.

To make it to Ganzorig, Gazimagomedov shutout a young but hard-nosed 2018 world runner-up Razambek ZHAMALOV (RUS), 6-0, in his opening round match. He then breezed past America’s Jason CHAMBERLAIN (USA), 10-0, before running into the buzzsaw that is U23 world runner-up David BAEV (RUS).

Baev, the Alans champion, fought the reigning world champion for everything that he had and nearly picked up the upset victory, but Gazimagomedov squeaked out the 2-2 criteria win.

It wasn’t easy, though. Baev scored an inactivity point in the opening period and controlled the narrow 1-0 lead heading into the final 3 minutes. Gazimagomedov struck first in the closing period and gained the 2-1 advantage. With under a minute to go, Gazimagomedov knew that he could not give up a takedown, but could risk giving up a step out and still win on criteria, which he did and put himself into the finals for a second straight year.

Though he does have two world titles, Gazimagomedov has yet to win a Yariguin title.

At 57kg, Abasgadzhi MAGOMEDOV (RUS) stunned back-to-back world medalists on his way to the finals.

In the quarterfinals, Magomedov commanded a 12-6 lead over 2017 Thomas GILMAN (USA) before planting him on his back for the fall.

It was in the second period when Gilman scored a takedown to cut Magomedov’s lead to 10-6. The American tried to score an another two with a gut wrench, but the Russian stopped him in his tracks and scored the fall with under 30 seconds left in the final period.

Magomedov then upset two-time world bronze medalist ERDENEBAT Bekhbayar (MGL), 3-3, to reach the Yariguin finals for the first time in his career.

Erdenbat, a 2016 Olympian, ended the first period with a step out and a takedown and led 3-0 heading into the second period.

The final period is when Magomedov jump-started his motor and increased his attack rate. Mogomedov cut the lead to 3-1 with a step out and later scored the match-winning takedown with under a minute left to win the match on criteria, 3-3.

At 61kg, U23 world champion Magomedrasul IDRISOV (RUS) bounced back to his winning ways and made the Yariguin finals after a disappointing fifth-place finish at December’s Alans.

Idrisov, the reigning Russian National champion at this weight, was one match away from representing Russia at the world but fell to eventual world runner-up Gadzhimurad RASHIDOV (RUS) in a special wrestle-off at the Poland Open.

Idrisov’s picked up a 5-2 quarterfinals win over Ramazan FERZALIEV (RUS) and an 8-2 thrashing over Mongolia’s GANSUKH Otgonbaatar (MGL) to set up a finals meeting with Romania’s Nikolai OKHLOPKOV, who is one of only two non-Russian freestyle wrestlers to make the day two finals.

Japan will meet Russia for each of the four gold medals on the second day of competition at the Ivan Yariguin. (Photo: Sachko Hotaka)

In women’s wrestling, Japan and Russia will go toe-to-toe for all four of the day two gold medals.

In the first traditional bracket at 50kg, after her seventh Yariguin appearance, Anzhelika VETOSHKINA (RUS) finally broke down the barrier and made it to her first Yariguin finals. The two-time Yariguin bronze medalist will take on Japan’s four-time age-level world champion Kika KAGATA (JPN) in the 50kg gold-medal bout.

Tomorrow’s finals are Kagata’s fifth straight finals appearance at a senior-level competition, but she’s looking to reach the top of the podium for the first time since winning the 2017 Dave Schultz Memorial. She has very few blemishes on her record, but most of them come within the past year after dropping the finals of the Beat the Streets, World University Championships, and the Japan Championship.

In the round-robin bracket finals, Nao TANIYAMA (JPN) and Viktoriia VAULINA (RUS), who both went undefeated, will fight for the 55kg gold medal, and undefeated wrestlers Yuzuka INAGAKI (JPN) and Svetlana LIPATOVA (RUS) will meet in the 59kg gold-medal bout.