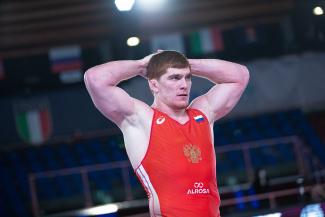 OSTIA, Italy (March 4) --- Two years after his last Ranking Series event, Musa EVLOEV (RUS) captured his third gold medal of the Series with a dominant performance at the Matteo Pellicone Ranking Series, which got underway in Rome on Thursday.

The two-time defending world champion showed no mercy on his opponents, scoring two out of three wins by technical superiority. On the way to his gold medal, the Russian scored 22 points and did not concede a single one.

Kazakhstan captured two gold medals of its own after advancing four wrestlers to the finals in the morning session. Aidos SULTANGALI (KAZ) open the gold medal account for his country after his countryman Sultan ASSETULY (KAZ) forfeited the final due to injury. Meiirzhan SHERMAKHANBET (KAZ) captured his second Ranking Series gold and fourth medal overall after a technical superiority 12-2 over Mate KRASZNAI (HUN).

Hungary and Turkey were the two other countries which claimed the remaining two gold medals to close the day. Istvan TAKACS (HUN) won the 87kg gold medal while four-time world champion Riza Kayaalp (TUR) claimed the 130kg gold medal with 7-0 win in the final.

Evloev, who won the gold medal at the Individual World Cup in Belgrade, began the day with an 8-0 win over Luca SVAICARI (ITA) and gave little to no chance to Rio Olympics and world bronze medalist Cenk ILDEM (TUR) in his 6-0 win.

Less than two minutes into the final, the 27-year-old came up with a big four-point throw in the final against Erik SZILVASSY (HUN). He then scored a second-period pushout to compelete the win 8-0 and capture his first Ranking Series gold since the Dan Kolov-Nikola Petrov gold in March, 2019.

While Vedernikov also showed dominance throughout his round-robin to win the gold, Sefershaev had a some close bouts. In the quarter-final, the Russian survived a close 2-2 win against Zhanserik SARSENBIYEV (KAZ) before getting the gold via injury default.

Coming into the Matteo Pellicone Ranking Series, Viktor LORINCZ (HUN) was the favourite to win the gold medal at 87kg category. He held an unpreecented record having won six Ranking Series gold medals and begin unbeaten in 23 bouts.

But after three years of sheer dominance at the event, Lorincz tasted his first defeat at the hands of fellow countryman Istvan Takacs (HUN).

Takacs was his country's lone gold medalist of the day but it was the semi-final that made the headlines. With three wrestlers in the 87kg category, Lorincz and Takacs met in the last-four bout. Both wrestlers exchanged points for passivity but it was the latter who took a 3-1 lead for exposure and kept it till the end, hand Lorincz his first Ranking Series defeat in 25 bouts.

Kayaalp was the final gold medal of the day. While there were some nervous moments for the multi-medalist at the Olympics as he took the bouts till the last minute, he cruised to his second Ranking Series gold, first in three years. It was a deliberate method by him.

"It's good to wrestle in Rome and prepare for the upcoming tournaments," he said. "I wanted to take the matches as long as possible from my side."

Kayaalp will now be headed back to Turkey for a training camp before heading to Poland for the European Championships. He will also be part of the second Ranking Series event, also to be held in Poland. 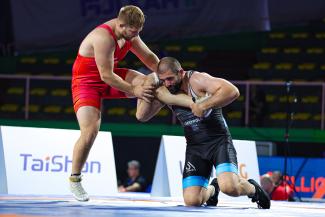