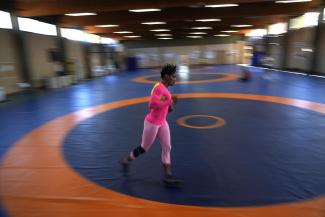 Over the last few weeks, wrestlers from around the world have been arriving in Japan in preparation for this week's Tokyo Olympic Games. After navigating through several roadblocks that looked to have derailed her trip, Fatoumata Yarie CAMARA's (GUI) arrived in Japan just in time to lace up her boots and become the first Guinean woman to compete at the Olympic Games.

"Fatoumata Yarie Camara is used to being thrown to the ground and getting up again, getting back into the fight. She’s dedicated her life to wrestling, a sport that breeds tenacity. On the mat, she qualified for the Tokyo Olympics, the only athlete from Guinea to do so. Off the mat, she has battled the beliefs of her culture and family that women don’t belong in sports.

Camara endured delays as the pandemic threatened the Games. Then, three days before the rescheduled opening ceremony, her dream of standing alongside the world’s best athletes teetered on a plane ticket — one she couldn’t afford and government officials hadn’t given her. Saying they wanted to keep Guinea’s athletes safe from COVID-19, the West African country withdrew from the Olympics entirely." 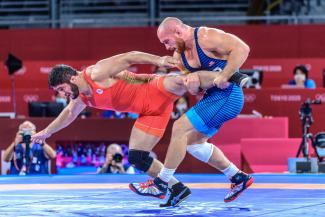