Chamizo Closes Out Sassari With Gold in Home Country 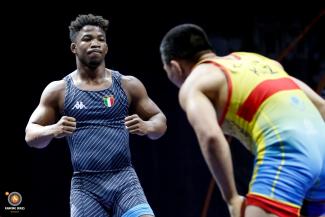 SASSARI, Italy (May 25) – Frank CHAMIZO (ITA) capped off his run to a Sassari title in front of his home nation with a 6-4 come-from-behind win over tenth-ranked Daniyar KAISANOV (KAZ) in what was a battle of reigning 74kg continental champions.

Chamizo used the support from the ruckus Italian crowd to push him past Kaisanov in the finals. “I’m so happy for (the fans). They support me; I needed that. I love the fans.”

The Italian, who won the European Championships last month in Bucharest, Romania, found himself in a four-point hole against the reigning Asian champion after he surrendered a takedown and a leg lace -- but closed the Kazakh wrester’s lead to two points with a takedown of his own before the ending whistle of the first period sounded.

In the second period, Chamizo picked up his offensive attack rate and gained the lead on criteria with an early two. The two-time world champion tacked on his second takedown of the period and third overall to take the 6-4 advantage into the final 30 seconds. The Italian fought off several attacks and hung on to win his first career Sassari gold medal, improving on his eighth-place finish from 2014.

After the match, Chamizo said, “I’m focused. I’m not joking. That’s it, guys. I don’t want to talk about wins or loses. I want talk about training and staying focused.”

Chamizo entered the Sassari as the fourth-ranked wrestler in the world with 56 points and will jump Avtandil KENTCHADZE (GEO) and Jordan Ernest BURROUGHS (USA) after collecting 16 points for his gold-medal performance on Saturday. “I think competing is important. The reason for me competing is I need the points for the rankings,” said Chamizo. The Italian superstar will be the No. 2-ranked wrestler at 74kg sits four points behind reigning world champion Zaurbek SIDKOV (RUS) who has 76 points.

In his finals interview, Chamizo said he plans to wrestle at the final Ranking Series event of the year, the Yasar Dogu. Depending on if Sidakov shows up and Chamizo medals, the Italian could head into the World Championships as the No. 1 seeded wrestler in the world.

Nurkozha KAIPANOV (KAZ)  was one of two wrestlers from Kazakhstan who won a Sassari gold medal on Saturday night. (Photo: Gabor Martin)

Though he lost in the 61kg gold-medal bout, Rassul Kalyev was named champion after Iran’s Mohammadbagher YAKHKESHI got disqualified for failure to comply with United World Wrestling medal ceremony rules. In the 61kg Nordic-style bracket, Yakheshi closed out his day with a 4-1 record, including a 7-2 win over Rassul Kaliyev in the gold-medal bout – but the Iranian’s gold medal got revoked during the medal presentation ceremony for failure to cooperate with United World Wrestling’s medal ceremony procedures.

Yakhkeshi took the podium not wearing the approved medal ceremony clothing. According to United World Wrestling’s rule book, wrestlers have to wear their countries tracksuit on the podium to receive their medal. Yakhkeshi, who was wearing short sleeves, was asked several times to comply with the rules but failed to do so, among many other things, which resulted in disqualification.

The 57kg finals match was short lived and only lasted 77 seconds. Azamat Tuskaev scored a counter-offensive takedown off of Darthe CAPELLAN’s (CAN) double leg attempt, then quickly locked up a cradle and stuck the Canadian wrestler.

Khalil Aminov gave Russia their second gold medal of the night with a 6-2 win over Galymzhan USSERBAYEV (KAZ). Aminov scored a pair of one-point stepouts and picked up a four-point double leg to win the 79kg gold-medal bout, 6-2.

Russia’s third champion came at 125kg when Pavel Krivtsov scored a takedown with 1.7 seconds to defeat Daniel LIGETI (HUN). Krivtsov gained the 4-4 lead on criteria, then added a point for a failed Hungarian challenge and counter-offensive takedown as time expired to beat Ligeti, 7-4.

Alireza KARIMIMACHIANI (IRI) was one of the three Iranian champions. (Photo: Gabor Martin)

Karami Leads Iran To Third-Place Finish
Had it not been for Mohammadbagher Yakheshi's 61kg gold medal getting revoked while he was on the podium, Iran would have had won four gold medals on Saturday. Either way, Ahmad BAZRIGHALEH (IRI), Alireza KARIMIMACHIANI (IRI), Hamed TALEBIZARRINKAMAR (IRI), won back-to-back-to-back titles at 86kg, 92kg, and 97kg respectively and helped Iran finish third as a team.

In the 86kg finals, Ahmad Bazrighaleh pulled off the most improbable comebacks of the tournament, defeating Kazakhstan’s Azamat DAULETBEKOV in a 29-point shootout. Bazrighaleh was in danger of giving up a technical superiority win when his Kazakh opponent led 10-2 after the first period –- but the Iranian fought back and scored 17 unanswered points, outlasting Dauletbekov, 19-10.

In the 92kg finals, returning world bronze medalist Alireza Karimimachiani muscled around Russia’s Batyrbek TCAKULOV (RUS) and captured the gold medal with a 7-2 victory. Karimimachiani scored his seven points off an exposure, three stepouts and a pair of brutality points.

Gongane Wins 65kg Title After Being Down 6-1
In one of the most exciting matches of the night, India’s Sonba GONGANE (IND) scored the 9-8 come-from-behind win over Russian Ivan Yariguin champion and 16th-ranked Magomedrasul IDRISOV in the 65kg gold-medal bout.

Gongane trailed 6-1 at one point in the match, but continued to claw back, and ultimately gained the 7-6 outright lead with 120 seconds left. The Indian again found himself behind when the Russian picked up a takedown - but Gongane stayed on the attack and picked up a pair of one-point exchanges to win the match, 9-8. 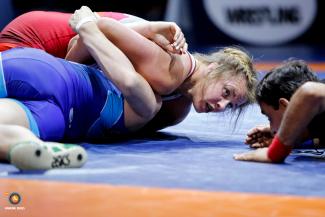 SASSARI, Italy (May 24) – In arguably the most anticipated women’s wrestling match in the Ranking Series' two-year history, Rio Olympic champion Erica WIEBE (CAN) only needed two minutes to pick up the fall over London Olympic champion Natalia VOROBEVA (RUS).

In the first period of the 76kg finals, Wiebe ducked a front headlock attempt from her Russian opponent and used an unorthodox inside leg hook to throw Vorobeva on her back for the fall. “The secret to my success is I’m pretty dangerous from every position,” Wiebe said when asked out the unconventional maneuver she used to pick up the fall. She went on to say, “Today was a test, and I’m happy with how I competed. I love being creative on the mats, and I love to get to wrestling positions. That’s my bread and butter, so I went for it.”

The Budapest world bronze medalist went on to say “I wanted to go out there and compete. I wanted to make (Vorobeva) uncomfortable. I knew if I got her on her back, I wanted to stick her.” That's exactly what she did to pick up her second career Ranking Series title and first since last year's Poland Open.

In another highly anticipated women’s wrestling matchup on Friday night, Tamyra MENSAH (USA), who hadn’t even been in Italy for 24 hours, capped off her impressive run to a third consecutive Ranking Series title with a 4-0 win over Budapest world runner-up Danielle LAPPAGE (CAN).

The American landed in Italy on Thursday at 22:30, didn’t get to bed until well after midnight, then had to get up before sunrise for her final weight cut before weights.

Mensah fought through all sorts of adversity to get to Sassari, including having to check her weight on a baggage scale at Chicago’s airport - but her coach continued to hammer home that she needed to embrace the adversity and remind herself why she fell in love with the sport.

The second-ranked wrestler in the world didn’t use the long travel as an excuse, nor did she look at her extremely tough draw as a downfall. Mensah drew into Rio Olympic silver medalist Maryia MAMASHUK (BLR) in her first match. She won that match, 10-0. In her second match, she picked up a 5-1 win over Meerim ZHUMANAZAROVA (KGZ) and followed that up with a 9-2 semifinals routing of two-time European champion Anastasia BRATCHIKOVA (RUS).

In the finals, Mensah scored a pair of first-period takedowns to defeat Danielle Lappage, who was up from her Budapest weight of 65kg.

Mensah’s Friday night win in Sardinia helped her lock up the No. 2 seed at the Nur-Sultan World Championships.

Bullen had no problem putting her five points on the board, picking up an inactivity point and a takedown before the end of the first period. In the second period, the Norwegian wrestler planted Dhanda on her back and held her there for nearly the entirety of the second period and scored the 5-0 shutout win.

“I lost to her at the worlds, so it means a lot that I can (wrestle) a match so great.” Bullen added, “I can just see the development that I’ve had in my technical wrestling…I feel like I’m growing every day, so it’s really fun to do that and ultimately perform at such a big competition like this, so it means a lot.”

In the 55kg finals, a matchup of past world champions was supposed to happen – but tenth-ranked Mattsson got her hand raised after seventh-ranked Vanesa KALADZINSKAYA (BLR) injury defaulted out of the match before the whistle blew.

Mattsson added 14 points to her previous total of 18 and will sit inside the top-4 of the rankings with 32 points heading into the final Ranking Series event of the year.

In her first appearance at 62kg, Henna Johannsson hit a thunderous four-point double leg in the first period, followed by a deep double in the second period, and defeated No. 18 (at 59kg) Elmira GAMBAROVA (AZE), 6-4.

Johansson’s win leaves the Swedish coaching staff with a tough decision heading into the European Games and World Championships. Do they go with Johansson or do you go with the bronze medalist at this weight, Malin MATTSSON (SWE)? Mattsson beat Johansson two weeks ago, but Johansson outplaced here in Sardinia. “Of course I’m chasing her, and she’s chasing me. I think that’s making us step up a little bit more.”

When asked if she’s solidified her spot for Sweden at the European Games, Johansson said, “I hope so. I just knew I had to go out today and do my best because I didn’t two weeks ago. But I did what I could, and I hope the spot is going to be mine.”

In closing, the 62kg champion said, “My goal is to go to the World Championships and try to qualify Sweden for the Olympics.”

India’s Seema Seema picked up a statement win over Daria LEKSINA (RUS) in the 50kg gold-medal bout, ending the match early after scoring five takedowns. Seema grabbed a pair of takedowns and led 4-0 after the first period, then tacked on three additional takedowns in period number two to end the match by technical superiority with over 60 seconds left on the clock.

Seema came into the Sassari ranked 30th in the world with 14 points. The Indian wrestlers win on Friday night doubled her Ranking Series point total and catapulted her up the rankings to No. 7 in the world behind sixth-ranked Olympic bronze medalist SUN Yanan (CHN) who has 25 points.

Russia’s Ekaterina POLESHCHUK controlled KIM Hyungjoo (KOR) in the 53kg finals from whistle to whistle and claimed her first gold medal since winning the Alexander Medved Prizes back in 2017. Poleshchuk, the 2018 U23 world bronze medalist, came into the weekend with 8 Ranking Series points, which was good enough for the 39th ranking in the last set of point-based rankings. Her 16 point win on Friday brought her new total to 24 points, moving her up into the eight spots when the next rankings come out.

Linda MORAIS (CAN) sacked Kumari MANJU (IND) in the 59kg finals after being up 9-0 and picked her first care Ranking Series title.

The final day of wrestling at the Sassari City Matteo Pellicone Memorial begins tomorrow at 10:00 (local time) when freestyle takes over.