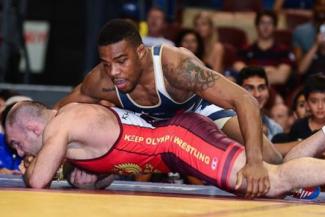 With five champions and all eight wrestlers earning medals, the United States cruised to the men's freestyle team title at the Pan American Championships on Thursday at National Polytechnic Institute in Mexico City.

The highlight bout of Thursday's final round was the 74kg final between world No.1 Jordan BURROUGHS (USA) and Livan LOPEZ (CUB), the 2013 World silver medalist at 66kg. Burroughs has won every World or Olympic championship since 2011. Lopez was a bronze medalist in London in 2012.

Other Americans to claim championships were Zach SANDERS at 57kg, Andrew HOCHSTRASSER at 61kg, Hunter STIEBER at 70kg and Zach REY at 125kg.

Cuba only entered six wrestlers, all at the Olympic weights, and came away with five medalists and three champions -- Alejandro VALDES at 65kg, Reineris SALAS at 86kg and Javier CORTINA at 97kg.

Officially, the U.S. came away with the team championship with 74 points, while Canada, which brought a full team and placed all eight of its wrestlers in the top 10, was second with 50. Cuba, with five out of its six wrestlers reaching the finals, finished third with 49 points.

The Canadian contingent was led by silver medalist Mike ASSELSTINE at 61kg and bronze medalists Steven TAKAHASHI at 57kg and Korey JARVIS at 125kg.

The United States and Cuba were the class of the field as Cuban wrestlers combined to go 18-3, while the Americans were 25-3. Since 2008, the two nations have combined to win 47 of the 50 possible gold medals at the Pan Am Championships. Cuba has 26 golds since 2008, while the U.S. has 21.

57kg
Zach SANDERS (USA) won his first senior-level championship with a gold medal at 57kg. He bested Alfredo CISNEROS (CUB) 3-2. Sanders trailed 2-1 in the second period before earning the go-ahead takedown. Sanders was second at the Dave Schultz Memorial International earlier this year. He reached the finals after beating eventual bronze medalist Steven TAKAHASHI (CAN) 11-6 in the semifinals. He opened up with two technical falls. Takahashi and Andry DAVILA (VEN) won bronze medals.

61kg
After getting caught early, Andrew HOCHSTRASSER (USA) came back with a cradle to pin Michael ASSELSTINE (CAN) at 3:37 to claim the Pan American Championship at 61kg. Like Sanders, it was Hochstrasser's first senior-level gold medal. The silver medal was Asselstine's best finish since winning the Jeux de la Francophonie in September of 2013. Hochstrasser survived a scare in the semifinals. He trailed 10-1 before outscoring Wilfredo RODRIGUEZ (VEN) 20-1 to earn a 21-11 technical fall. Rodriguez and Jefferson MAYEA (ECU) won bronze medals.

70kg
Collegian Hunter STIEBER (USA) won the non-Olympic weight of 70kg by defeating Pedro SOTO (PUR) 4-1. Stieber took an early 2-0 lead with a takedown. After Soto was put on to the shot clock, Stieber countered a single leg and worked his way around for control to build a 4-0 lead. Soto scored his only point when Stieber gave up a caution point in the second period. It was Stieber's first medal at any senior-level tournament. Yoan BLANCO (ECU) and Cesar ROBERTTY (VEN) won bronze medals.

74kg
World No. 1 and reigning World and Olympic champion Jordan BURROUGHS (USA) dominated the field to win his first Pan American championship at 74kg. Burroughs jumped out to a 9-0 lead and topped 2013 World bronze medalist Livan LOPEZ (CUB) 13-2. Lopez was a 2012 Olympic bronze medalist at 66kg. Burroughs built a 5-0 lead after scoring a caution point and then hitting his trademark double leg takedown, taking Lopez straight to his back for four points. Burroughs then hit another takedown and then two one-point leg laces before Lopez finally scored a takedown at the 4:04 mark. Burroughs finished with two more takedowns to bring his senior-level record to 88-1. Burroughs' only other Pan American appearance was a gold-medal finish at the Pan Am Games in 2011. Edison HURTADO (COL) and Adonis ARROYO (VEN) won bronze medals.

86kg
Reineris SALAS (CUB), ranked ninth in the world and a returning World silver medalist, dominated Jose DIAZ (VEN), beating him 11-0 in the gold medal final. Salas struck first scoring a caution point when Diaz was put on the shot clock. Salas went on the offensive scoring a takedown and quickly converted a gutwrench for two points to build a 5-0 lead late in the first. With 10 seconds left in the period, Salas went big, hitting a four-point throw with a beautiful footsweep. He finished off Diaz with a single leg takedown nine seconds into the second period. The victory was Salas' fifth Pan American Championship. He previously won titles in 2006, 2007, 2009 and 2010. Clayton FOSTER (USA) and Pool AMBROCIO (PER) won bronze medals.

97kg
Javier CORTINA (CUB) won his second Pan American championship with a dominant tournament. Cortina teched Jarlys MOSQUERA (COL) 12-1 in the final at 97kg and outscored his three opponents 32-1. Cortina struck quickly, taking a body lock and switching off to a double to score a two-point takedown. He then fired off two straight gutwrenches for exposure, but did give up a point on one of the rolls. He extended his lead to 10-1 with a big double leg and then finished off Mosquera with a takedown on the edge at the 1:26 mark of the first period. Deron WINN (USA) and Marcos SANTOS (PUR) won bronze medals.