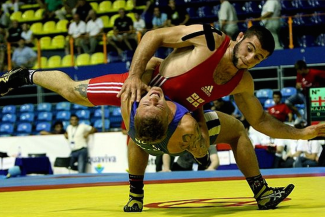 Baldauf capped his march through the 96kg bracket with a bodylock throw to fall over Dmitri KAMINSKI (BLR) at 2:49 of the final at Hala Spodek arena in Katowice, southern Poland.

Gela BOLKVADZE (GEO) and Beka KANDELAKI (GEO), both silver medalists at the 2012 cadet worlds, both made the final step up on the medals podium at 74kg and 120kg, respectively.

Russia, meanwhile, took the team title without a single champion, scoring 59 points from a silver medalist and six bronze medal winners. Georgia, which had four bronze medalists to go along with its two champions, finished second with 58 points.

Azerbaijan was third with 45 points, followed by Armenia with 37.