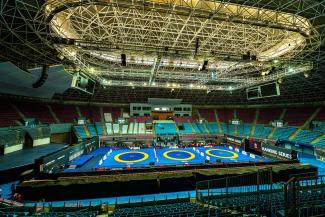 TUNIS, Tunisia (July 11) -- The final stop of the Ranking Series moves to the Tunisian capital -- Tunis. After wrestlers grabbed ranking points at the continental championships and the three Ranking Series events, the Zouhaier Sghaier is the final event from which wrestlers can earn those all-important points.

The World Championships in September will see the top eight wrestlers from each weight class receive a seed. While some of the seeds have been locked up, a few wrestlers can still move around and change their numbers.

A top-seeded wrestler and defending world champion who will be in Tunisia is Thomas GILMAN (USA). He will be in action for the first time since winning his maiden Pan-Am title in May.

Gilman, who defeated Alireza SARLAK (IRI), in the final in Oslo last year, is likely to face the same opponent in Tunis. Not only Sarlak, but Gilman's semifinal opponent Horst LEHR (GER) will also be eyeing to avenge his loss from last year.

For Sarlak, beating Gilman in Tunis will not be as important as getting past Amhad MOHAMMADNEZHAD (IRI). The two are battling for a spot on the Iran national team.

Sarlak, the silver medalist at World Championships, lost to Mohammadnezhad at the Takhti Cup last month which resulted in the Iran federation going for another selection in Tunisia. Mohammadnezhad will fancy his chances against Sarlak and then pick up other wins over international wrestlers. 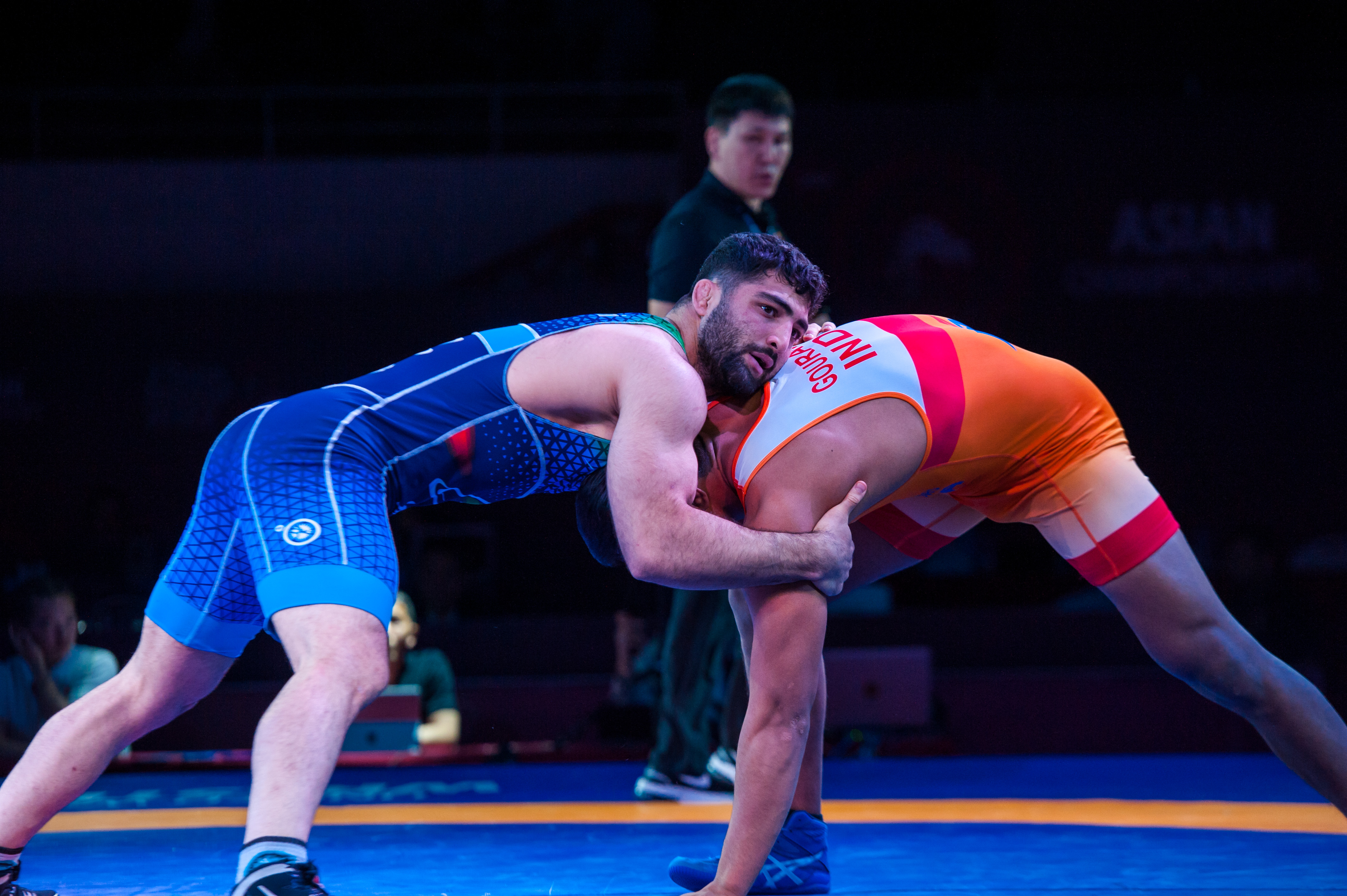 That is not the only weight class in which Iran is trying to finalize its team for Belgrade. At 79kg, a huge battle awaits as World Championships silver medalist Mohammad NOKHODI (IRI) and Asian champion Ali SAVADKOUHI (IRI) are wrestling for the spot.

While the winner among the two will get the spot, if they do not face each other, the higher positioned wrestler may get a look in. But both will have their task cut out against European champion Georgios KOUGIOUMTSIDIS (GRE), Asian silver medalist Gourav BALIYAN (IND) who fell agonizingly to Savadkouhi in the Asian final.

Chandler MARSTELLER (USA) has been the second-best for the USA after world champ Jordan BURROUGHS (USA) and gold in Tunis can further cement his name as one of the top stars of the weight class.

Iran also has Yones EMAMI(IRI) at 74kg but he has already confirmed his spot on the team along with Asian champion Rahman AMOUZADKHALILI (IRI) at 65kg. For all other weight classes, Iran held a selection trial Sunday in Tehran with defending world champion Hassan YAZDANI (IRI), Kamran GHASEMPOUR (IRI) and Amir ZARE (IRI) all set to defend their titles.

None of the three are taking the trip to Tunisia but still, there are some big stars in action at the four-day tournament. 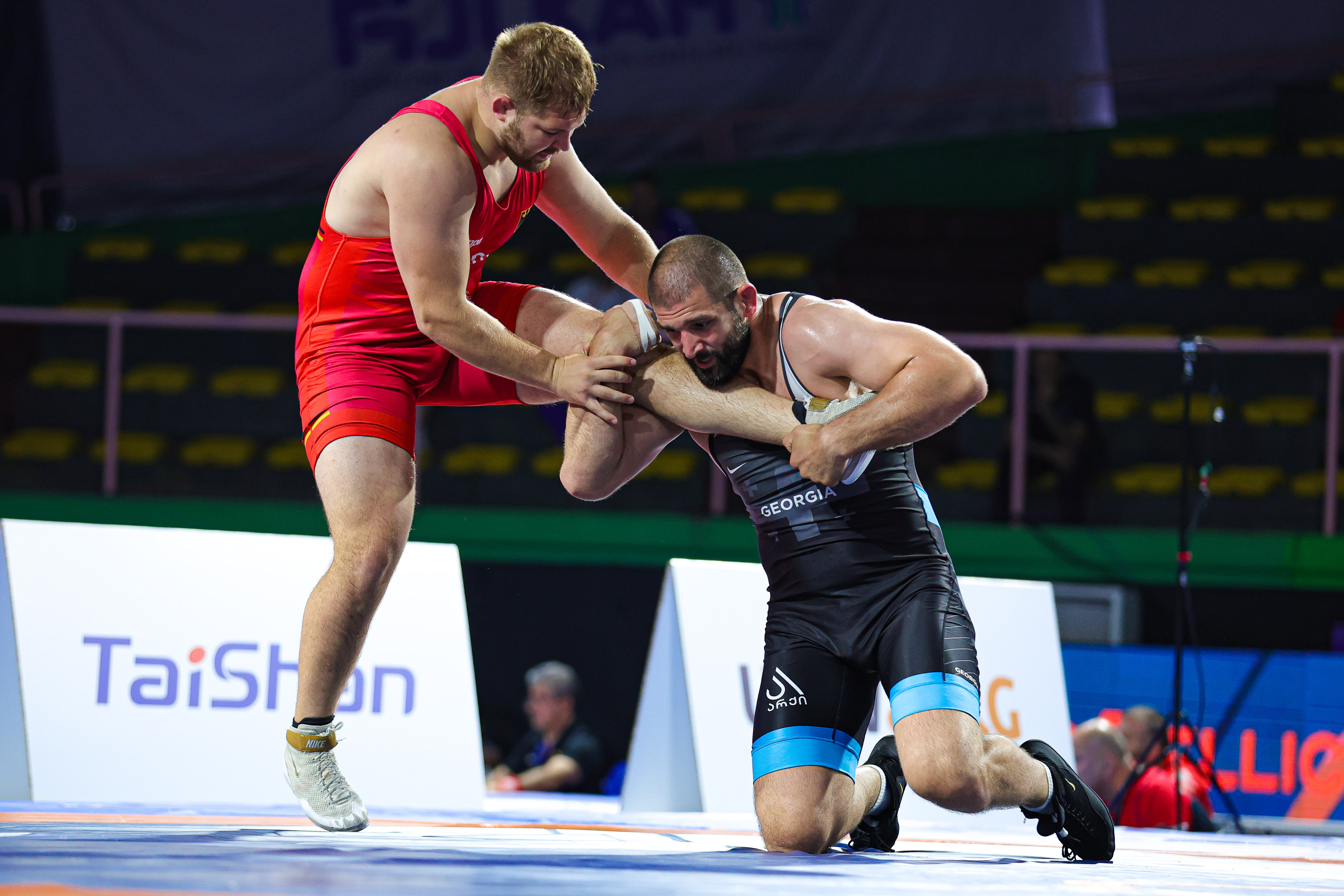 Geno PETRIASHVILI (GEO) will be the favorite to win the gold at 125kg. Kazakhstan is sending Yusup BATIRMURZAEV (KAZ) and Alisher YERGALI (KAZ) with the hope to finalize one name for the World Championships.

Hayden ZILLMER (USA) will also be tested for the first time after making the USA world team over Nicholas Gwiazdowski (USA).

The USA is sending a strong team to the Ranking Series event and Kyle SNYDER (USA) will be their leader as Burroughs and Kyle DAKE (USA) decided to skip the event.

Snyder will have a trio of Turkey wrestlers in Oktay CIFTCI (TUR), Polat POLATCI (TUR) and Burak SAHIN (TUR) on his path to gold. Others entered in the weight class include U20 world bronze medalist Deepak NEHRA (IND), Serik BAKYTKHANOV (KAZ) and Mamed IBRAGIMOV (KAZ).

At 65kg, Kazakhstan is hoping that Adlan ASKAROV (KAZ) can cement his place with a good showing in Tunis. But he will have Tokyo Olympian Agustin DESTRIBATS (ARG), U23 Asian champion SUJEET (IND) and former U17 world champion John DIAKOMIHALIS (USA). 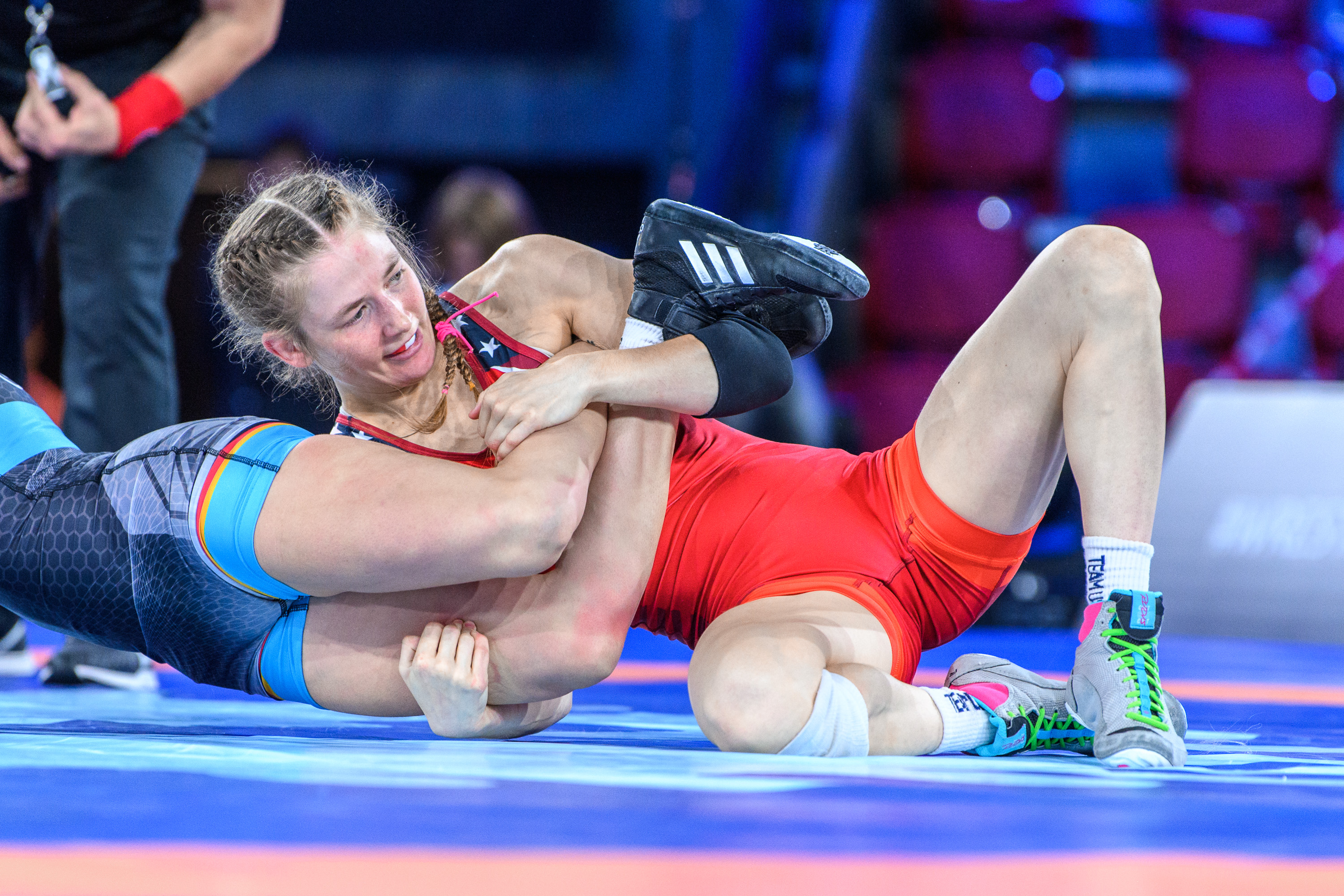 Other world team members of the USA will be in action as well. Dominique PARRISH (USA) will have two Canadians at 53kg in Karla GODINEZ (CAN) and Diana WEICKER (CAN). Luisa VALVERDE (ECU) is also taking the trip to Tunisia to grab some points before the seeds are finalized.

African champion Sarra HAMDI (TUN), who is currently ranked 11 and ninth in seedings, will like to break into the top 10 and hope that she will get the seed for the World Championships.

Maroulis at 57kg will the favorite to win the gold and certain her top seed with a gold medal-winning performance. Trying to stop her will be Elvira KAMALOGLU (TUR), Giullia RODRIGUES (BRA), Sandra PARUSZEWSKI (GER) and Mansi AHLAWAT (IND) among others. 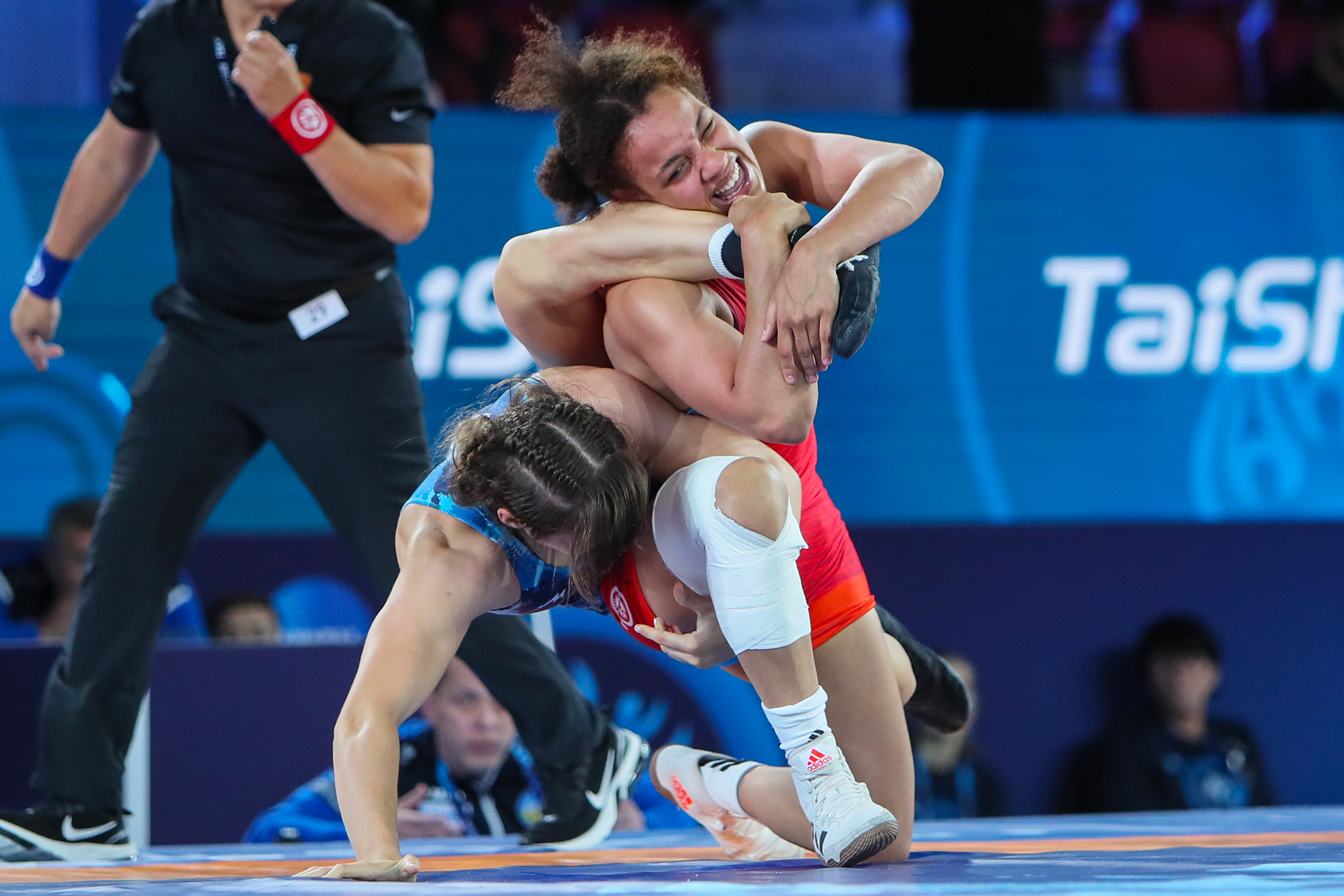 Tamyra MENSAH STOCK (USA) will be wrestling for the first time since winning the bronze medal at the Oslo World Championships. She lost her top seed to world champion Meerim ZHUMANAZAROVA (KGZ) and can now only move up to second.

But her path to gold will not be easy as U23 world champion Koumba LARROQUE (FRA), Pauline LECARPENTIER (FRA) and even Forrest MOLINARI (USA) are wrestling at 68kg.

Larroque has been out of action for more than nine months nursing her knee injury. But she will be hoping to return to full form as she battles with Lecarpentier for a spot on France's team for Belgrade.

But U17 and U20 world champion Amit ELOR (USA) will have other ideas. Elor blanked Grote at the World Team Trials in June and a closer battle is expected between the two if they clash in Tunisia.

Despite the two accomplished stars, Buse TOSUN (TUN) will be the favorite to win the gold at 72kg. Ranked fourth in the world, Tosun missed out on a medal in Istanbul and but the world bronze medalist won a silver medal at the European Championships in March.

A medal in Tunis can take her to third in the world, a spot better than world champion Masako FURUICHI (JPN). 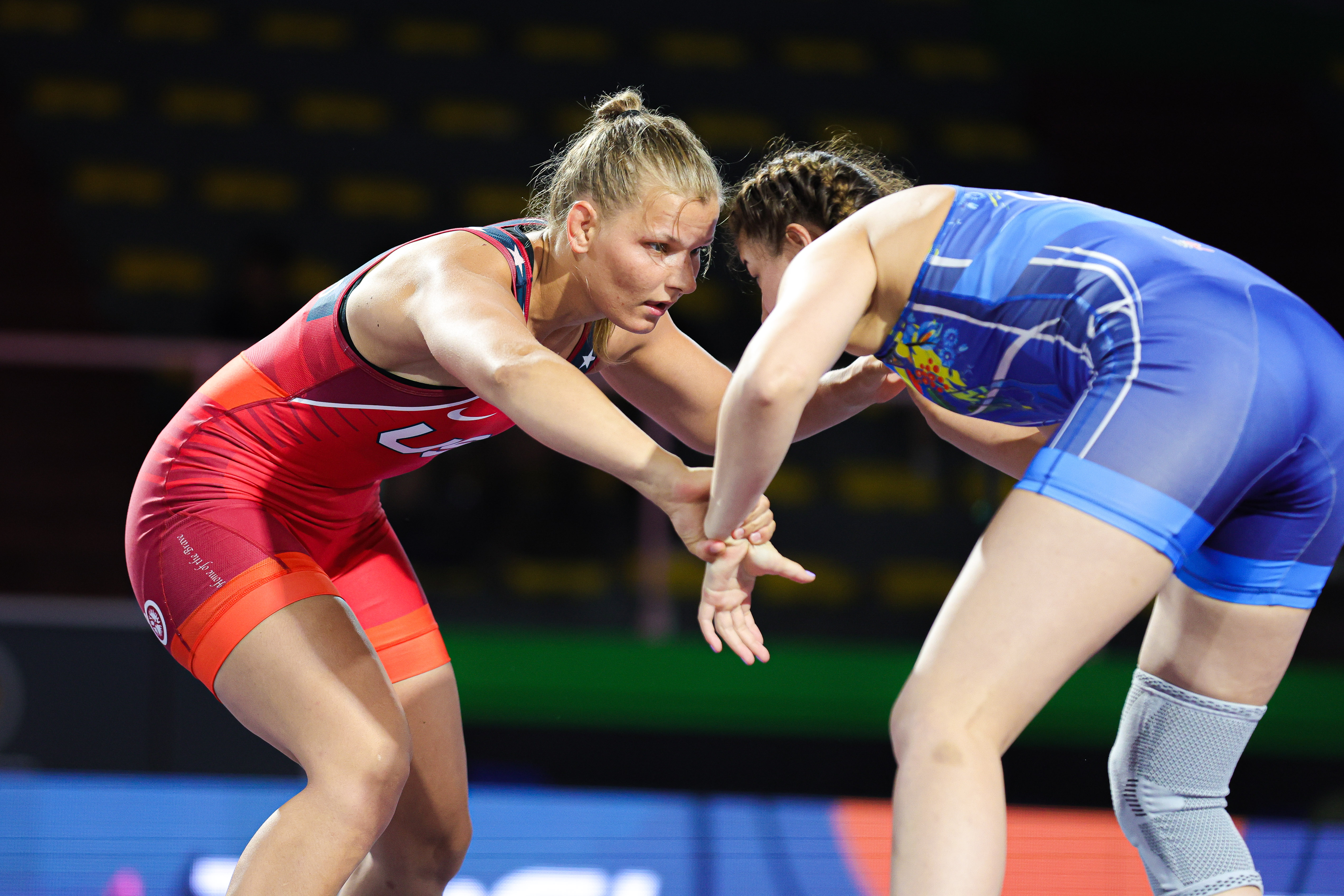 Once again she will be expected to perform on a similar level but Bell and Guilford will provide more resistance, having wrestled Makoyed domestically.

Top-ranked wrestler in the world at 59kg Sarita MOR (IND) will be wrestling for her second straight Ranking Series gold medal. She is clubbed against Elena BRUGGER (GER) and Siwar BOUSETA (TUN).

Rio Olympic bronze medalists Sakshi MALIK (IND) and Marwa AMRI (TUN) are both entered at 62kg. While Malik won the gold in Almaty, Amri is coming off a golden performance at the African Championships and Mediterranean Games. Both will fancy their chances to win the gold in Tunis with Amri holding the home advantage.

Lais NUNES and Ameline DOUARRE (FRA) are the other contenders for gold at 62kg. 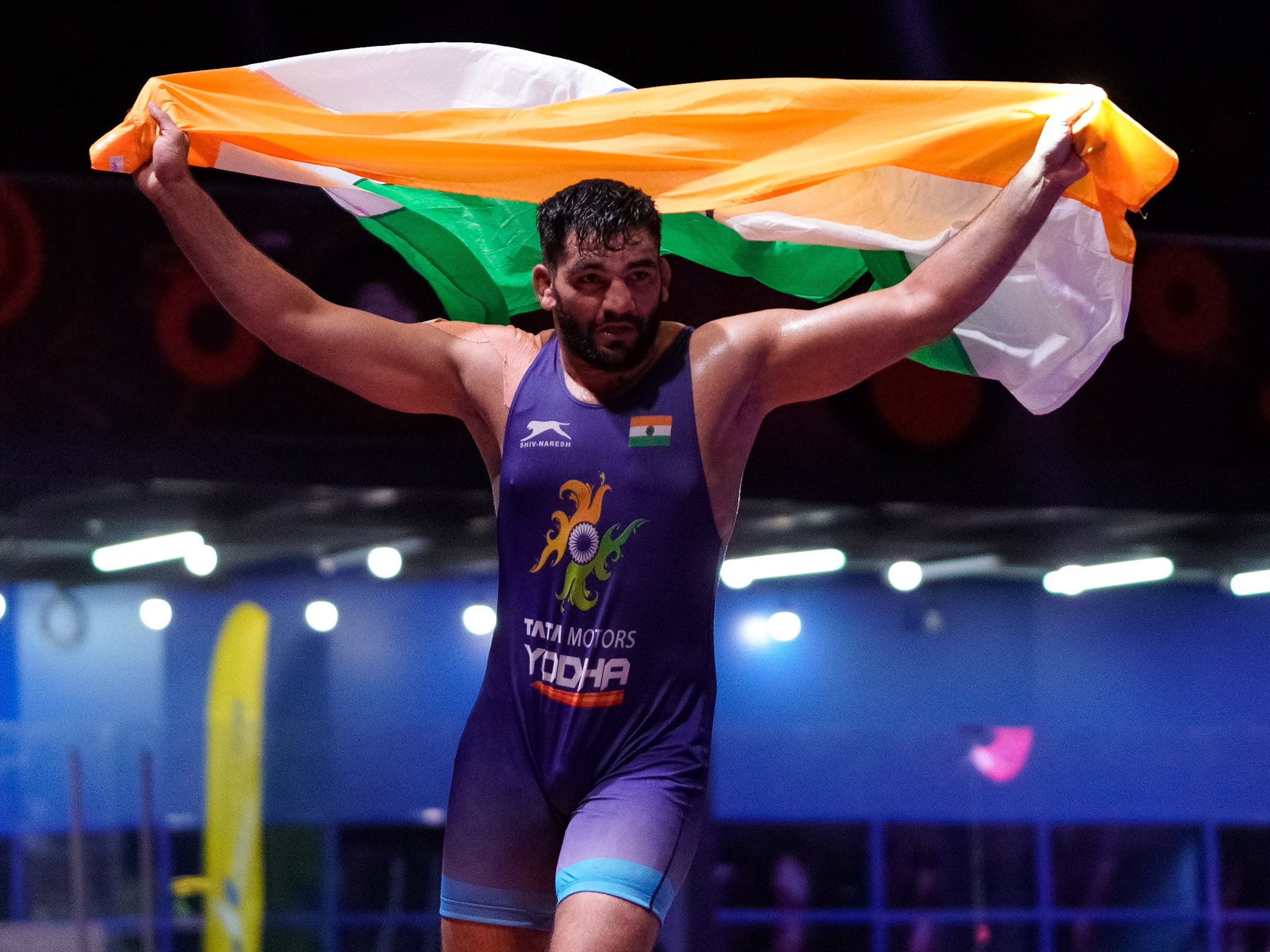 The Greco-Roman field is highlighted by wrestlers from Turkey, India and a few from Africa. Abdelkarim FERGAT (ALG) is entered at 60kg with Salim HAMDI (TUN) and Ayhan KARAKUS (TUR) also in the field.

India has entered two wrestlers at 67kg in NEERAJ (IND) and Sachin SAHRAWAT (IND). The battle for gold will be played out between the two and Koussay MELKI (TUN) and Volkan CAKIL (TUR).

Aik MNATSAKANIAN (BUL) will be the favorite to win the 77kg weight class. But for that, he will have to wrestle past Joilson DE BRITO (BRA) and Furkan BAYRAK (TUR).

Home star Lamjed MAAFI (TUN) will hope to win the 82kg weight category in front of his home crowd. Trying to stop him will be Harpreet SINGH (IND), Sajan BHANWALA (IND) and Emrah KUS (TUR).

Former Asian champion at 87kg Sunil KUMAR (IND) has his eyes on gold and for that, he has to only beat Mohamed MISSAOUI (TUN).

A similar process will be followed at 130kg as NAVEEN (IND), Amine GUENNICHI (TUN) and Muhammet BAKIR (TUR) hope to claim the gold.

The action begins July 14 with Greco-Roman action and women's wrestling beginning the next day. Freestyle will be on July 16 and 17. All the live-action and highlights will be available on uww.org. 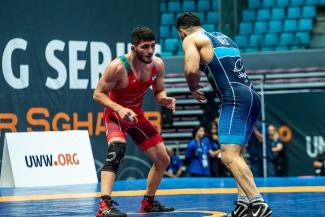 TUNIS, Tunisia (July 17) -- Iran entered the Zouhaier Sghaier Ranking Series to finalize its World Championships team as it was left with two wrestlers at 57kg and 79kg after the Takhti Cup and the national selection trial.

Two World silver medalists -- Alireza SARLAK (IRI) at 57kg and Mohammad NOKHODI (IRI) at 79kg -- were fighting for their spot on the national team.

While Sarlak had lost to Ahmad MOHAMMADNEZHAD (IRI) at the Takhti Cup, Nokodhi was forced for a trial as Ali SAVADKHOUI (IRI) won the Asian Championships. Coincidentally, the two pairs were placed in the same pool of their brackets and faced each other in the first bout itself.

Savadkhoui won a tense opening bout 5-5 against Nokhodi and took a step closer to that world event. But in a shocking turn of events, Nokhodi won his remaining bouts in the Nordic bracket and made it to the final.

His loss to Savadkhoui became irrelevant as the Asian champion failed to qualify for the semifinal and lost his chance to represent the nation at the World Championships.

Iran coaches and management perhaps wanted to conduct the trial in an international event as that would give a better idea about a wrestler's chance against foreign opponents. Had it been a one-off bout during the Takhti Cup or the later trial, Nokhodi would have failed to go to his second senior World Championships.

But as the management predicted, he lost to Savadkouhi but dominated other international wrestlers. In the final, he faced Bolat SAKAYEV (KAZ) and scored 10 points against six to win the gold medal.

At 57kg, Sarlak and Mohammadnezhad faced in the opening round which Sarlak won 2-0. Mohammadnezhad was expected to bounce back as the two could have met again in the final. But he suffered a loss to UDIT (IND).

Sarlak won all his bouts in the group stage and qualified for the semifinal against world champion Thomas GILMAN (USA). The rematch of the World Championships did not disappoint, with Gilman securing an 11-7 win.

Gilman made the final but not before suffering a  pin against Horst LEHR (GER) in the opening round. But Lehr then got injured and lost his semifinal to Udit 14-4

In the final, Gilman scored three takedowns to lead 7-2 but Udit made a come and came agonizingly close to beating Gilman who won 9-8.

Iran's third entry was Yones EMAMI (IRI) who will wrestle at the World Championships at 74kg. He dominated U17 world champion Sagar JAGLAN (IND) 11-0 in the Round 3 to win the gold.

The USA dominated the proceedings at 61kg and 70kg. Zain RETHERFORD (USA) did not give up a single point en route the 70kg gold, winning five bouts. In the final against Syrbag TALGAT (KAZ), Retherford continuously build the pressure and scored takedown after takedown.

Seth GROSS (USA) at 61kg also had an impressive performance. He will be representing the USA in Belgrade and warmed up with a gold medal after four wins including over Suleyman ATLI (TUR) and Aman SEHRAWAT (IND).

Kazakhstan won the gold medals at 86kg and 92kg. Asian champion Azamat DAULETBEKOV (KAZ) was far better than his two other opponents at 86kg while Abdimanap BAIGENZHEYEV (KAZ) won the 92kg gold after winning his three bouts.

The most he was challenged by was Viky CHAHAR (IND) but Baigenzheyev won that bout 4-2.

The gold is Sujeet's third consecutive international gold in a month after he won the U23 Asian Championships in late June and U20 Asian gold a week back.