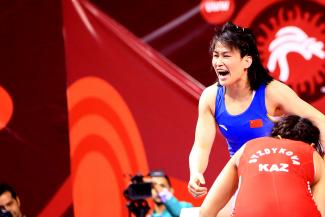 DOHA (May 8) – The Chinese women’s wrestling team, led by Asian Games champion ZHOU Feng, rolled past their continental competition Friday night at the Aspire Dome in Doha earning four of five gold medals and jumping out to a small lead over Japan in the team race.

Zhou, who is ranked No.2 in the world at 75kg, looked the sharpest of her career, easily dealing with a talented Elmira SYZDYKOVA (KAZ) in the finals, 11-0. The 2014 Asian championship runner-up improved on last year’s finish after racking up a pair of four-point moves to help her secure the first period technical fall and first Asian championship.

The title was Zhou’s third in eight months, having won the prestigious Klippan Women’s tournament in February, also at 69kg, and the aforementioned 2014 Asian Games title at 75kg.

Zhou’s performance capped an impressive night for the Chinese, who started the finals with ZHONG Xue Chun (CHN) taking gold at 53kg. Zhong started on her heels, defending a single leg attack by an aggressive Yong Mi PAK (PRK) before finding a defensive takedown. After the early setback Zhong – ranked No.3 at 53kg -- was able to secure four-straight gut wrenches to win with by a 10-0 technical fall.

The Asian championship is Zhong’s second title of 2015 having won the Paris Grand Prix in February.

At 55kg Japan earned their only gold medal of the night as Anri KIMURA (JPN) made quick work of Kum Ok HAN (PRK). The Japanese wrestle gave up a two-point exposure off her opening double leg, but on second attempt found the takedown and improvised arm bar to secure the fall midway through the first period. The title was Japan’s third in women’s wrestling at the Aspire Dome.

After a strong start DPR-Korea went 0-2 in the gold medal finals, much to the chagrin of their cheering section, which grew to more than 50 people for the day’s final session, were unable to find gold.

In the night’s most exciting bout No.7 XILUO Zhuo Ma (CHN) found a late four-point throw against Kanako MURATA (JPN) to win a dramatic 4-4 match at 63kg. Murata, ranked No.15 at 60kg, had succeeded for five minutes and 45 seconds in defending Xilou’s two-on-one throw attempt, but with the seconds ticking away the Chinese wrestler was able to convert and earn the gold.

China’s LUO Xiao Juan added a gold medal at 60kg after going 4-0 at the non-Olympic weight. Luo outscored her opponents 33-10 across her four matches, earning one fall and technical fall en route to her title. Japan’s Yoshimi KAYAMA took silver.