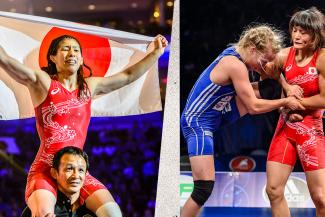 Icho and Yoshida have won gold medals at their previous three Olympic Games and will be favorites to go where no wrestler – male or female – has gone before when they arrive on the mats at Carioca Arena 2 on Wednesday and Thursday.

Greco-Roman legend Alexander KARELIN (RUS) is the only wrestler to have had a glimpse of a fourth gold medal when he advanced to the 130kg final at Sydney 2000. He had to settle for the silver medal, however, after a 1-0 loss to Rulon GARDNER (USA).

Icho will get first chance at a fourth gold medal on Wednesday, August 17, when the women’s welterweights (58kg) take to the mat, while Yoshida takes her shot the following day at 53kg.

Despite their records and reputations, however, opponents of Yoshida and Icho are far from conceding anything to the winners of 13 and 10 world championship titles, respectively.

At 58kg, 2014 world runner-up Valerie KOBLOVA (RUS) may be the leading challenger to Icho but 2013 junior world bronze medalist PUREVDORJ Orkhon (MGL) makes her Olympic Games debut owning a win over Icho at the Yarygin Grand Prix in January.

Rio 2016 will also be the first Olympic Games in which women will be competing in six weight categories since women’s wrestling made its debut at Athens 2004.

Among the leaders for the medals will be London 2012 gold medalist Natalia VOROBIEVA (RUS) at 69kg, silver medalist Mariya STADNIK (AZE) at 48kg and bronze medalist SORONZONBOLD Battsetseg (MGL) at 63kg as well as three-time world champion Adeline GRAY (USA).

Tosaka squeezed out a late win over Stadnik in the 48kg finals in Las Vegas, but fell in similar fashion in the semifinals of the Asian championships Bangkok to eventual champion SUN Yanan (CHN). 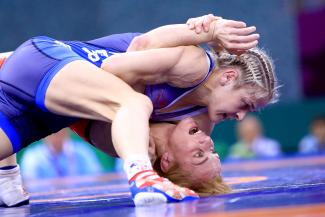 Top-ranked Stadnik won a bronze medal at Beijing 2008 as well as the silver in London and now has a chance to complete her set of Olympic Games medals with a triumph in the gold medal final at 48kg.

At 69kg, Vorobieva, who won her gold medal at 72kg, secured her first world title in 2015 with a victory over Asian Games gold medalist ZHOU Feng (CHN). Former world champions Aline FOCKEN (GER) and Jenny FRANSSON (SWE) are primed after wins in Germany and Poland.

On Thursday, August 18, Yoshida will face two of her most determined challengers ever in Mattsson and Maroulis.

Mattsson could be in line to secure Sweden’s first medal in women’s wrestling at the Olympic Games – although sister Johanna MATTSSON (58kg) and Fransson will have their chances for Sweden on the first day.

Maroulis, meanwhile, will be in the hunt for the first gold medal in women’s wrestling for the United States, but the historical “first” gold could also fall to Elena PIROZHKOVA (63kg) or Gray at 75kg later in the evening.

At 63kg, world champion SORONZONBOLD Battsetseg (MGL), who owns a bronze medal from London 2012, will be trying to become Mongolia’s first gold medalist in wrestling – and third overall for Mongolia at the Olympic Games.

Gray is the odds-on favorite at 75kg, but 2013 world champion ZHANG Fengliu (CHN) will try to follow in the footsteps of earlier gold medal-winning heavyweights from China -- WANG Xu (Athens 2004) and WANG Jiao (Beijing 2008).