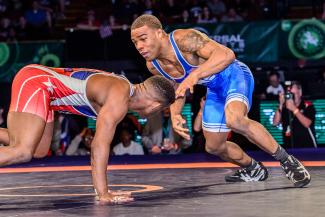 CORSIER-SUR-VEVEY, Switzerland (May 21) – United World Wrestling, the international federation for wrestling, has announced the dates and locations for the qualification phase of the 2016 Olympic Games in Rio De Janeiro, Brazil.

Overall the sport of wrestling has 336 Olympic qualifying spots, 18 gold medals, 18 silver medals and 36 bronze medals to distribute at the Rio Games.

The first qualifier for the 2016 Olympic Games will be the 2015 Wrestling World Championships which is being held in Las Vegas, September 7-12. The top six finishers in each weight class will qualify their nation for their weight.

Next, countries will enter their continental qualifiers, but are only eligible to enter athletes at weight classes they did not qualify during the World Championships. For example, if the wrestler from Country X wins the 2015 world championship at the 66kg weight class in freestyle, then Country X will not be eligible to enter a wrestler at 66kg weight category during the continental qualifier or either “Last-Chance” qualifier.

With a total of 14 qualifiers accounted for after the World Championships and continental qualifiers, nations will have two “Last-Chance” qualifying tournaments by which to earn Olympic births. Nations are only eligible to enter at weight classes where they have not qualified for the Olympic Games.

The first “Last-Chance” qualifier will be held in Ulaanbaatar, Mongolia with the top three men and top two women eligible for births, bringing the total of qualifiers to 17 in Greco-Roman and freestyle, and 16 in women’s wrestling.

The second and final “Last-Chance” qualifier is in Istanbul with the top two men and top two women in each weight class earning qualification spots and pushing the totals to 19 for Greco-Roman and freestyle and 18 for women’s wrestling.

A Tripartite Commission (Olympic Solidarity) oversees four additional spots, allocated from interested national federations who attempted to, but did not, qualify wrestlers during the initial phase of qualification.

The host country is also given four selections, but forfeits back one selection for each qualifier they accumulate during the qualification phase. These spots are then reallocated to the Tripartite Commission where they are distributed to eligible national federations.

Wrestling at the 2016 Olympic Games will be held in Rio de Janeiro from August 14 to 21.

The list of qualification tournaments, locations and dates are as follows: