CORSIER-SUR-VEVEY, Switzerland (April 15) -- They are the largest men in the sport of wrestling and for the past several years they've been exchanging some of its most epic battles.

With back-and-forth action and incredible stamina leading to nail-biting outcomes, Rio Olympic champion Taha AKGUL (TUR) and three-time world champion Geno PETRIASHVILI (GEO) have become appointment viewing for wrestling fans around the world. The duo has competed more than a half dozen times, exchanging wins and losses in what are often high-scoring matches with exertion that often seems in defiance of what is possible.

The documentary highlights the action on the mat, but also the incredible respect and admiration the duo shares for each other. 'I'm extra prepared and motivated each time we wrestle," says Akgul in the film. "He's an incredible sportsman with a strong will," replies Petriashvili.

While the action on the mat can get heated, the duo has showcased the power of respect in a rivalry and that wrestling -- while intense and without forgiveness -- can be a platform for building character. On Monday, the prize winners of the freestyle were announced and wrestlers from seven different countries took the top spot.

UWW continues to recognize and empower the wrestlers and will award $600,000 in prize money to 90 wrestlers, 30 from each style, based on a ranking system that honors the most active wrestler throughout the season. The top-ranked wrestler will get $10,000 followed by $7,000 for the second-placed wrestler and $3,000 for the third-ranked wrestler.

The prize money is almost three times from what it was in 2019 as the UWW Bureau had approved a generous $600,000 prize package at the beginning of the season. The 2021 prize money combines the amount that was reserved for 2020 but was not distributed due to the impact COVID-19 had on the competition. 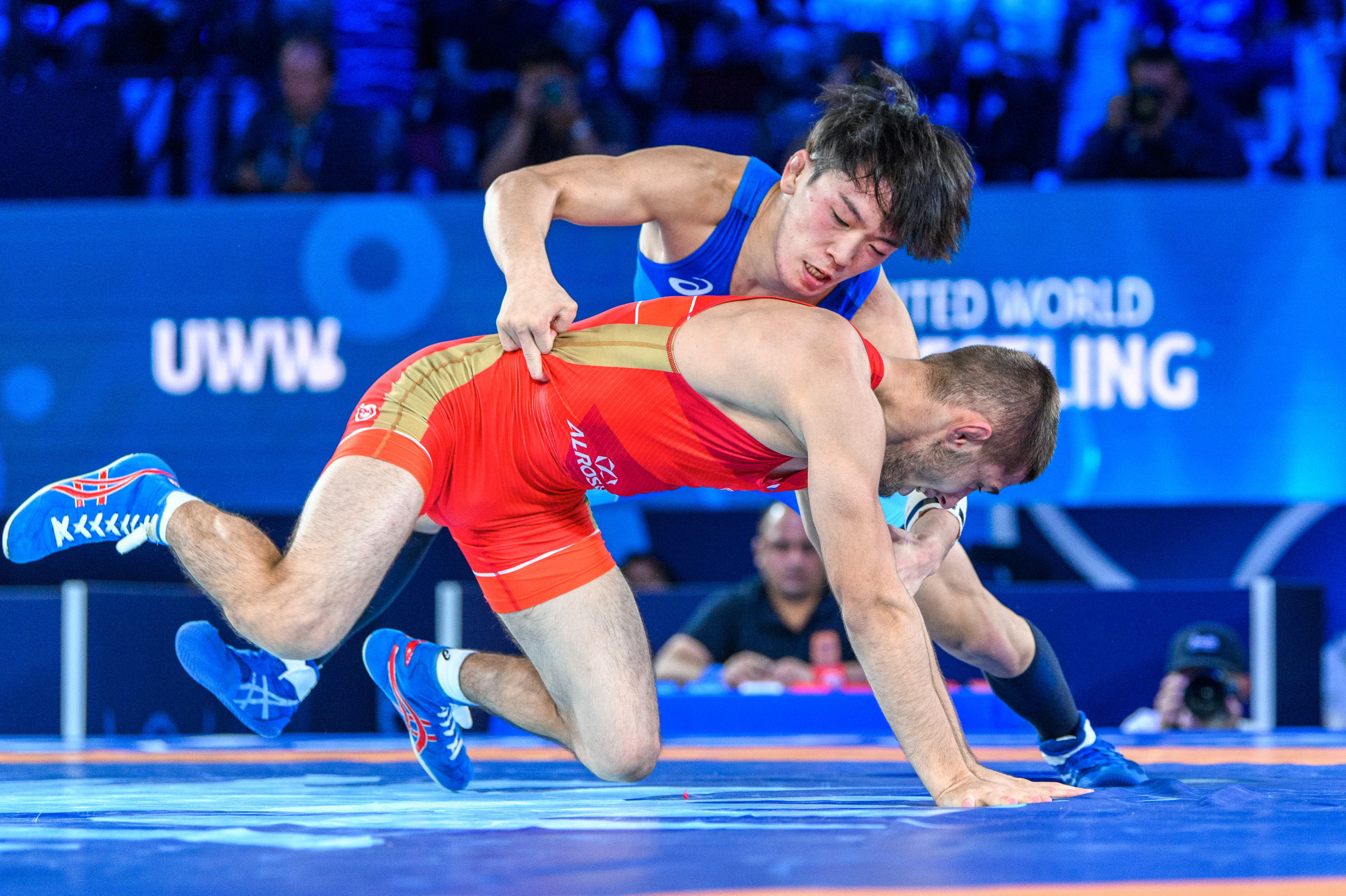 Emin SEFERSHAEV (RWF) came into the World Championships as the top-ranked wrestler after winning the European Championships and 20 ranking points. On the other hand, Ken MATSUI (JPN) had not competed internationally since 2019.

The RWF wrestler was the favorite to win the gold but Matsui stunned the field in Oslo to claim the gold medal and 58 points. He defeated Sefershaev in the 55kg final to be tied at 58 points but his gold medal superseded the RWF wrestler's silver.

Matsui, the former cadet world champion, expressed his happiness over winning the prize money of $10,000.

Sefershaev got 14 points for winning gold at the Matteo Pellicone as well but he did that at 60kg and the points cannot be added to the points he got at 55kg.

The third spot was captured by Eldaniz AZIZLI (AZE) who had 39 points after winning the bronze medals at the European and World Championships. His Euro bronze gave him 16 points while the Oslo bronze was worth 23 points. 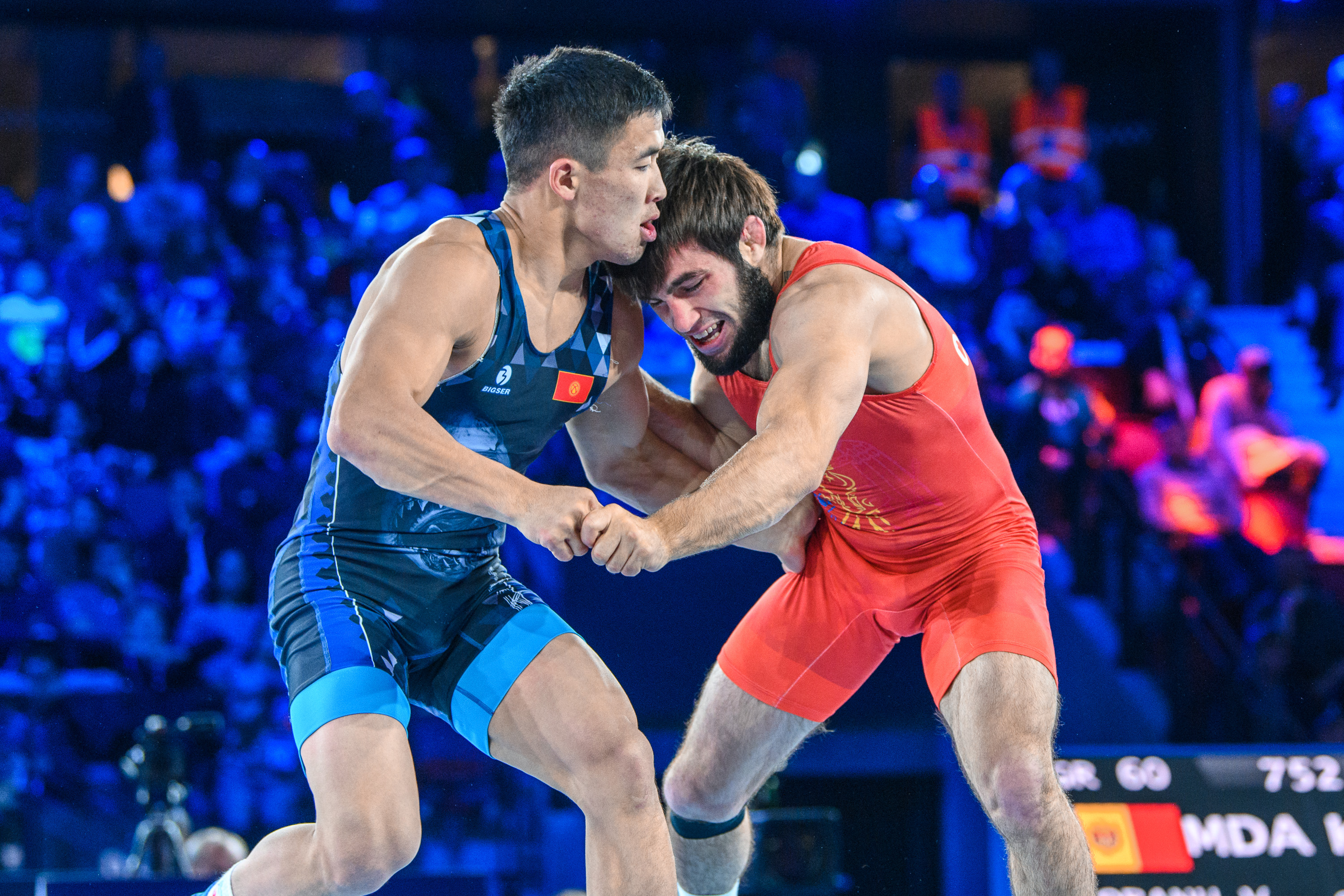 Victor CIOBANU (MDA) created history in Oslo after becoming Moldova's first-ever Greco-Roman world champion. His win at the World Championships gave him 58 points which were added to the 18 he got for a fifth-place finish at the Tokyo Olympics.

A total of 76 points were enough for his jump from eighth to the first position and overtake Olympic champion Luis ORTA SANCHEZ (CUB) who finished with 68 points and was second in the rankings. The Cuban skipped the '21 Worlds and could not add to his 68 points.

Oslo silver medalist Zholaman SHARSHENBEKOV (KGZ) managed to finish third with 54 points. He had 38 points from Oslo and 16 more from his seventh-place finish at the Tokyo Games. 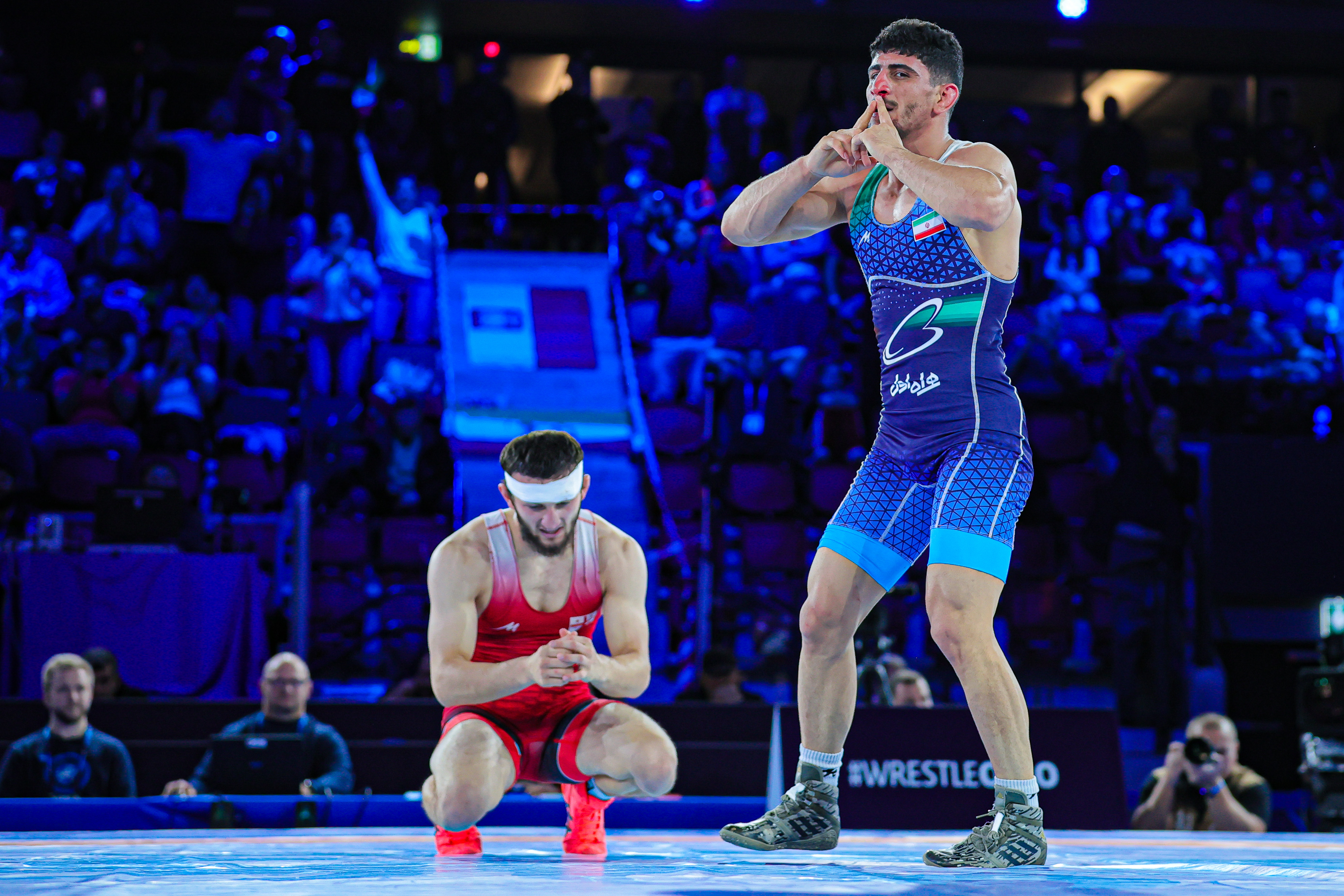 Asian champion Sultan ASSETULY (KAZ) was the top-ranked wrestler at 63kg before the World Championships but he finished 12th in Oslo and could not add more points.

Meysam DALKHANI (IRI), who had lost to Assetuly in the Asian final, captured the gold at the World Championships and moved from the fifth spot to the top spot, thanks to the 60 points he collected in Oslo. From the Asian Championships, Dalkhani had 18 points.

Leri ABULADZE (GEO) had a chance to move to the top once he reached the final but he managed only a silver medal to finish with 56 points. He had 16 points for the bronze-medal finish at the European Championships.

Taleh MAMMADOV (AZE) did not win a medal in Oslo but his fifth-place finish gave him 20 points that helped him climb to number three from six. His silver medal at the European Championships earlier this year had given him 18 points. 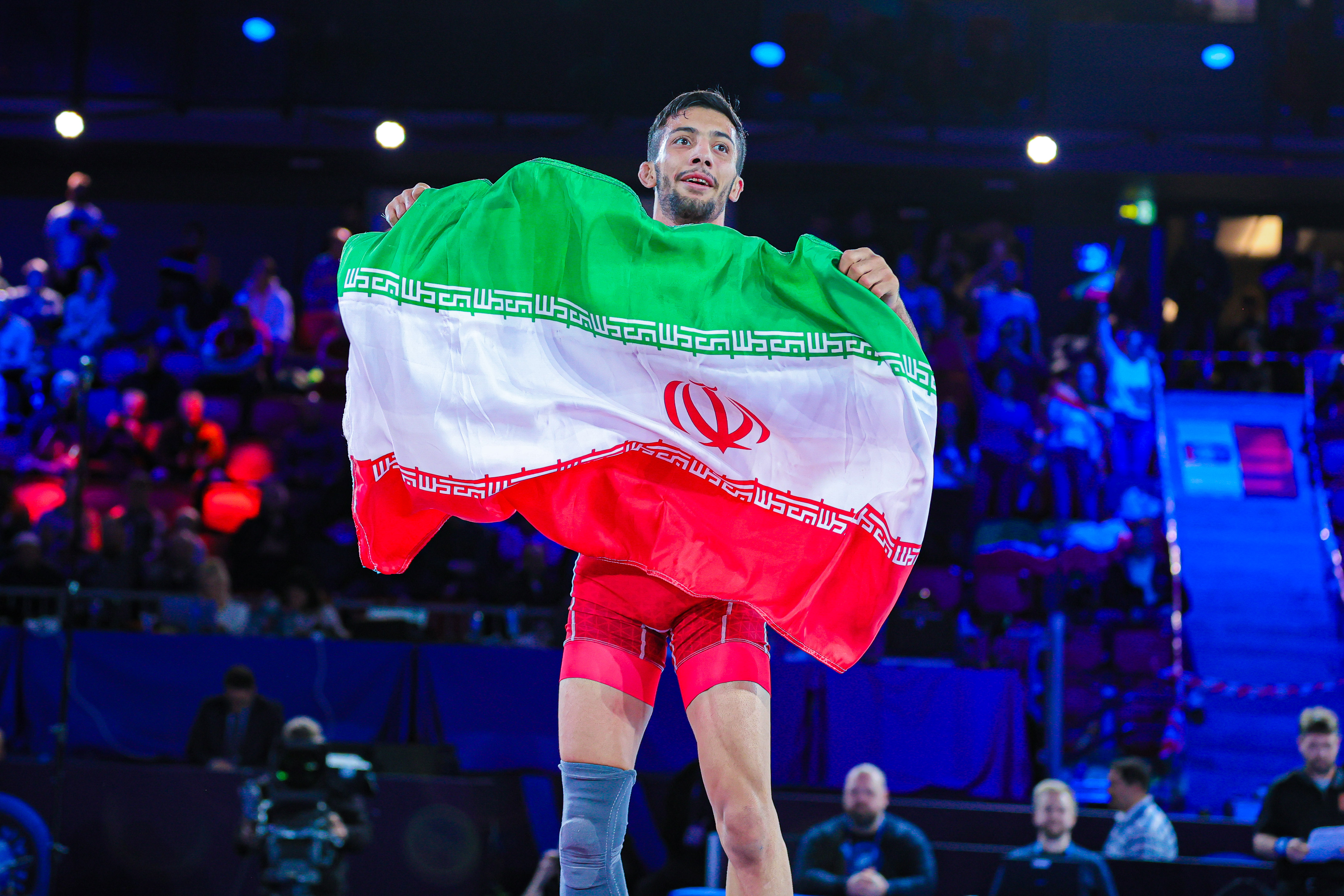 One of the two wrestlers in the world to win Olympic and World titles in the same year, Mohammadreza GERAEI (IRI) had an unchallenged path to the top at 67kg. He collected 128 points from the two tournaments he participated in, winning gold in both.

He won the 67kg gold medal at Tokyo Olympics and then repeated the feat at the World Championships in Oslo. He collected 68 points from Tokyo and added 60 more from the '21 Worlds.

Such were Geraei's wins that the second-placed wrestler at 67kg Murat FIRAT (TUR) managed only 60 points from four events. He began with a fifth-place finish at Matteo Pellicone which gave him 10 points as the number of participants in 67kg was 16.

Firat then won a bronze medal at the European Championships and added 16 more points. His gold in the Poland Open ranking added another 14 points. But the 20 points for a fifth-place finish at the Worlds gave him a boost and propelled him to the second spot.

Tokyo Olympics bronze medalist Mohamed ELSAYED (EGY) managed to keep his spot in the top three despite skipping the World Championships. He collected 26 points from the '21 Olympic Games, adding to the 12 points he had for a silver-medal finish at the Poland Open.

For Elsayed, 18 points were carried over from the 2020 African Championships as it was not held in 2021 owing to the COVID-19 pandemic. 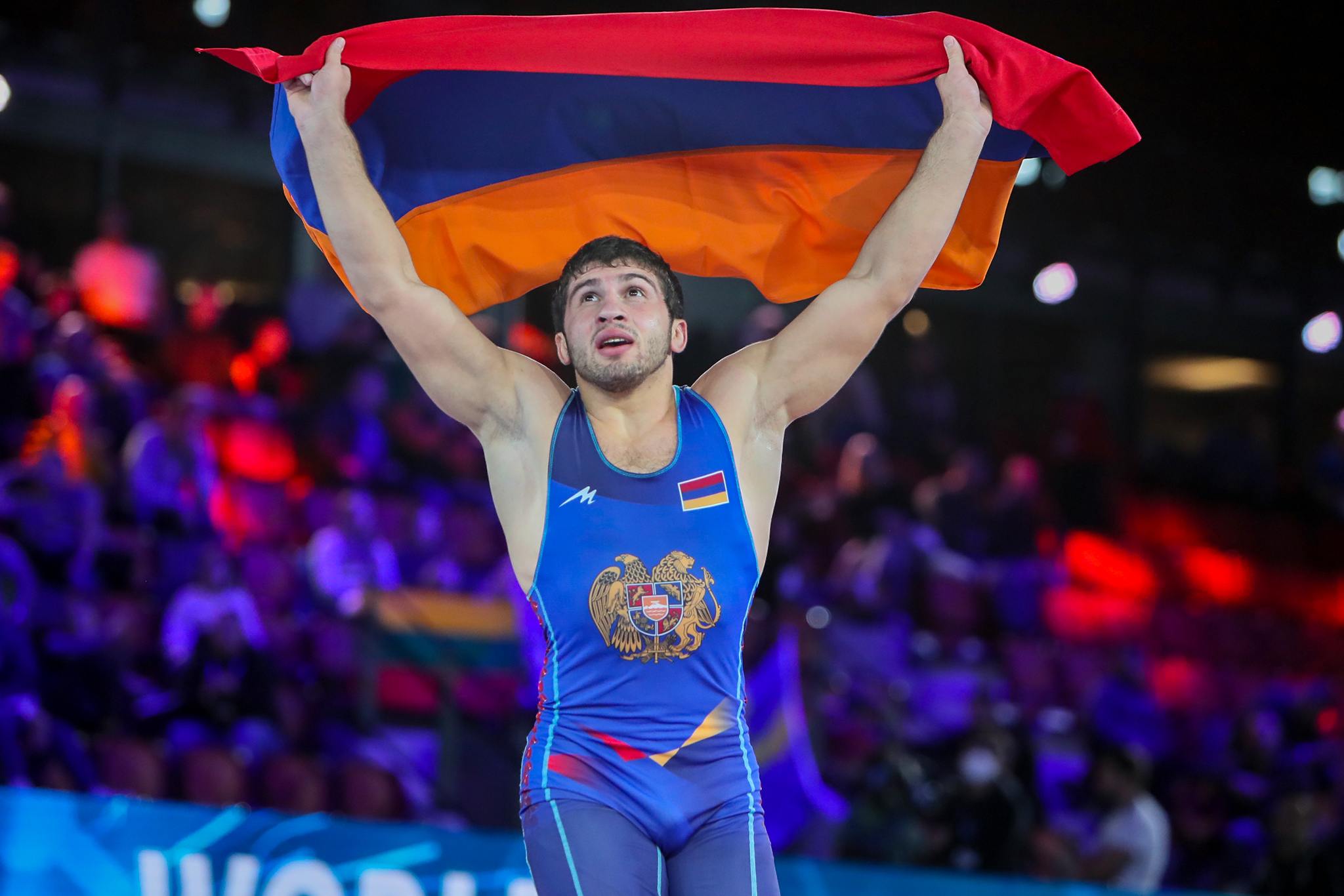 2021 world champion Malkhas AMOYAN (ARM) won the grand prize at 72kg after winning the gold medal in Oslo. The European silver medalist had collected 18 points from Warsaw and his run in Oslo gave him 60 more, enough for the top rank.

He defeated Sergei KUTUZOV (RWF) in the '21 Worlds final and the RWF wrestler collected 40 points for his silver medal. But that was not enough for him to finish second.

He finished third as the bronze medalist in Oslo Gevorg SAHAKYAN (POL) had 41 points to claim the second spot. He had 25 points from Oslo and 16 points from Poland Open where he won the gold medal at 72kg. 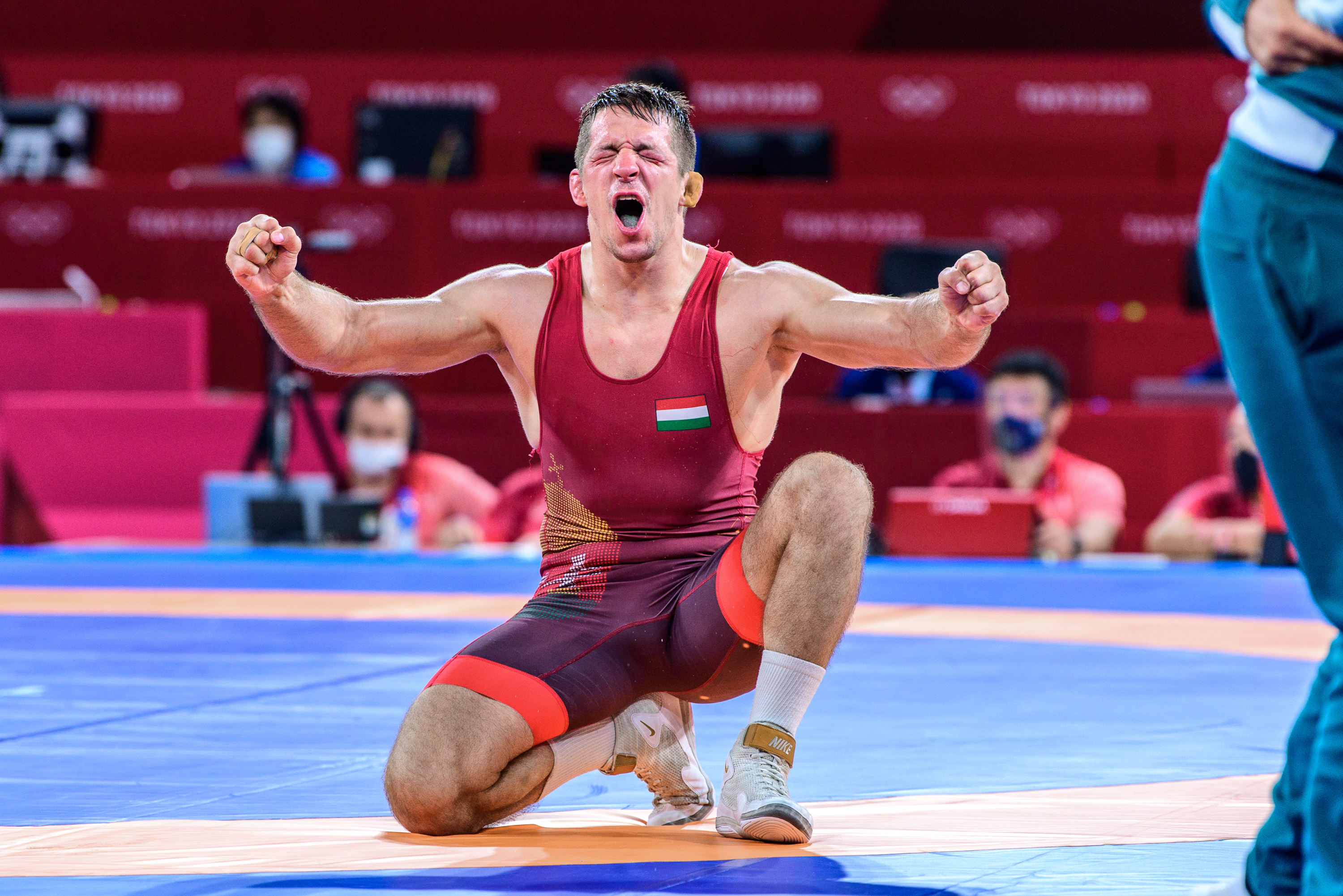 For the second consecutive time, Lorincz family will have a top ranked wrestler at the end of the year, In 2019, it was Viktor LORINCZ (HUN) who was awarded the top Greco-Roman wrestler while in 2021, his brother Tamas takes the honours at 77kg.

The Olympic and European champion Tamas LORINCZ (HUN) got 22 points from Warsaw and then added 68 points more in Tokyo where he defeated Akzhol MAKHMUDOV (KGZ) in the final. He decided to retire after the gold-medal performance.

Two-time Olympic champion and 2021 world champion Roman VLASOV (RWF) ended his year on a high with the gold in Oslo and a second-place finish in the rankings. He collected 60 points from the Oslo event.

He had suffered a shock loss to Tamas LEVAI (HUN) in the ranking event at Poland Open but managed to finish with a bronze medal, giving him 12 points. His 72 points were enough for a second-place finish.

Sanan SULEYMANOV (AZE) finished second to Vlasov in Oslo and collected 40 points, adding to the 18 points he got for the bronze medal at the European Championships. 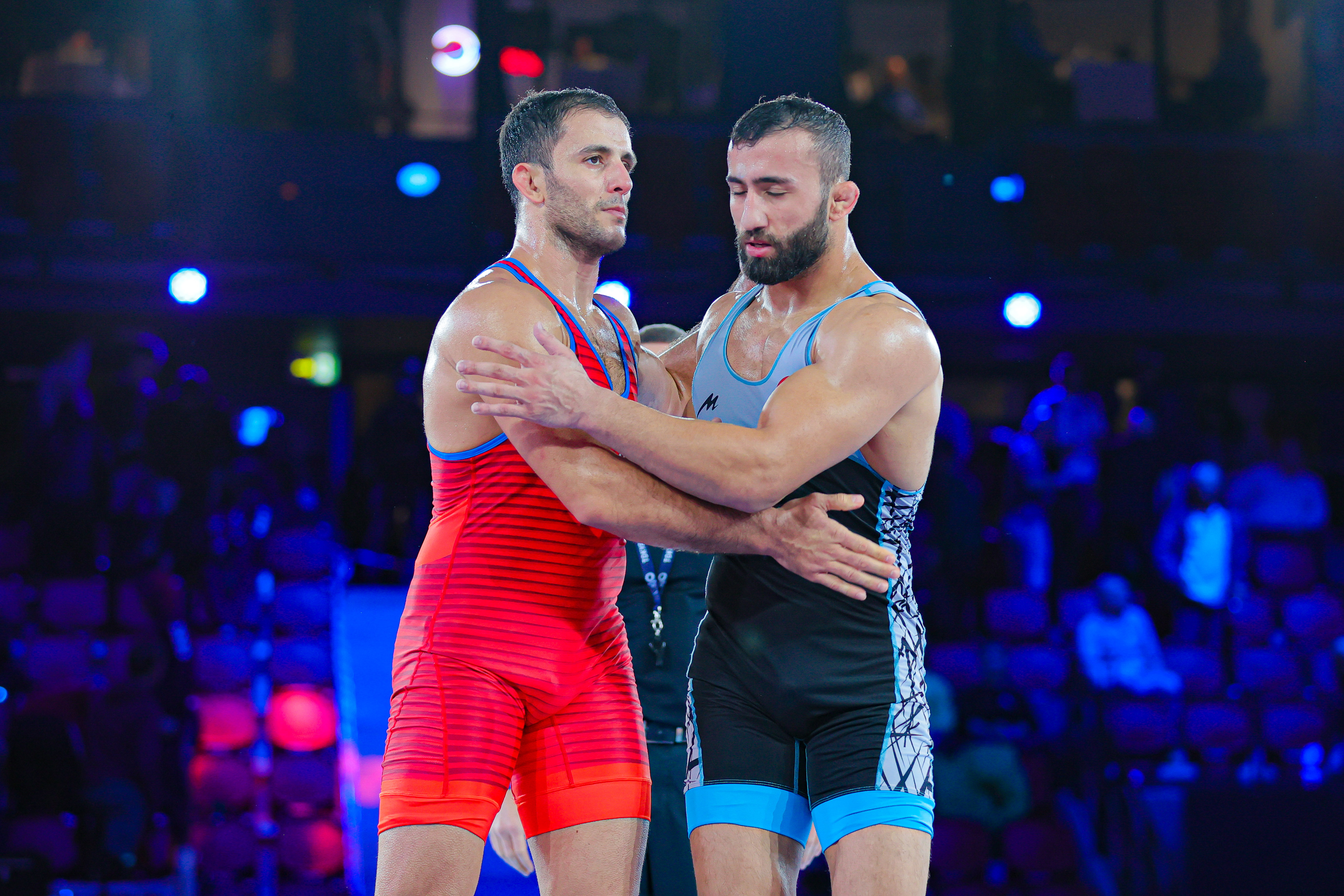 Rafig HUSEYNOV (AZE) displaced Adlan AKIEV (RWF) from the top spot at 82kg with a gold-medal performance at the 2021 World Championships. Akiev was the number one ranked wrestler thanks to title wins at the Matteo Pellicone and the European Championships.

Coming into the Worlds, Huseynov had only 10 points for his bronze medal at the Poland Open. But he defeated Akiev in the semifinal in Oslo and then won the gold medal at 82kg, collecting 60 points, taking his total to 70.

Huseynov had won a bronze medal at the Tokyo Olympics but that came at 77kg, points for which could not be added to the points he earned at 82kg.

Akiev's bronze only got him 25 points and a total of 61 points was good for only a second-place finish.

Burhan AKBUDAK (TUR) reached the final at the World Championships and collected 40 points. The other 14 he had collected by winning the silver medal at the Matteo Pellicone event. 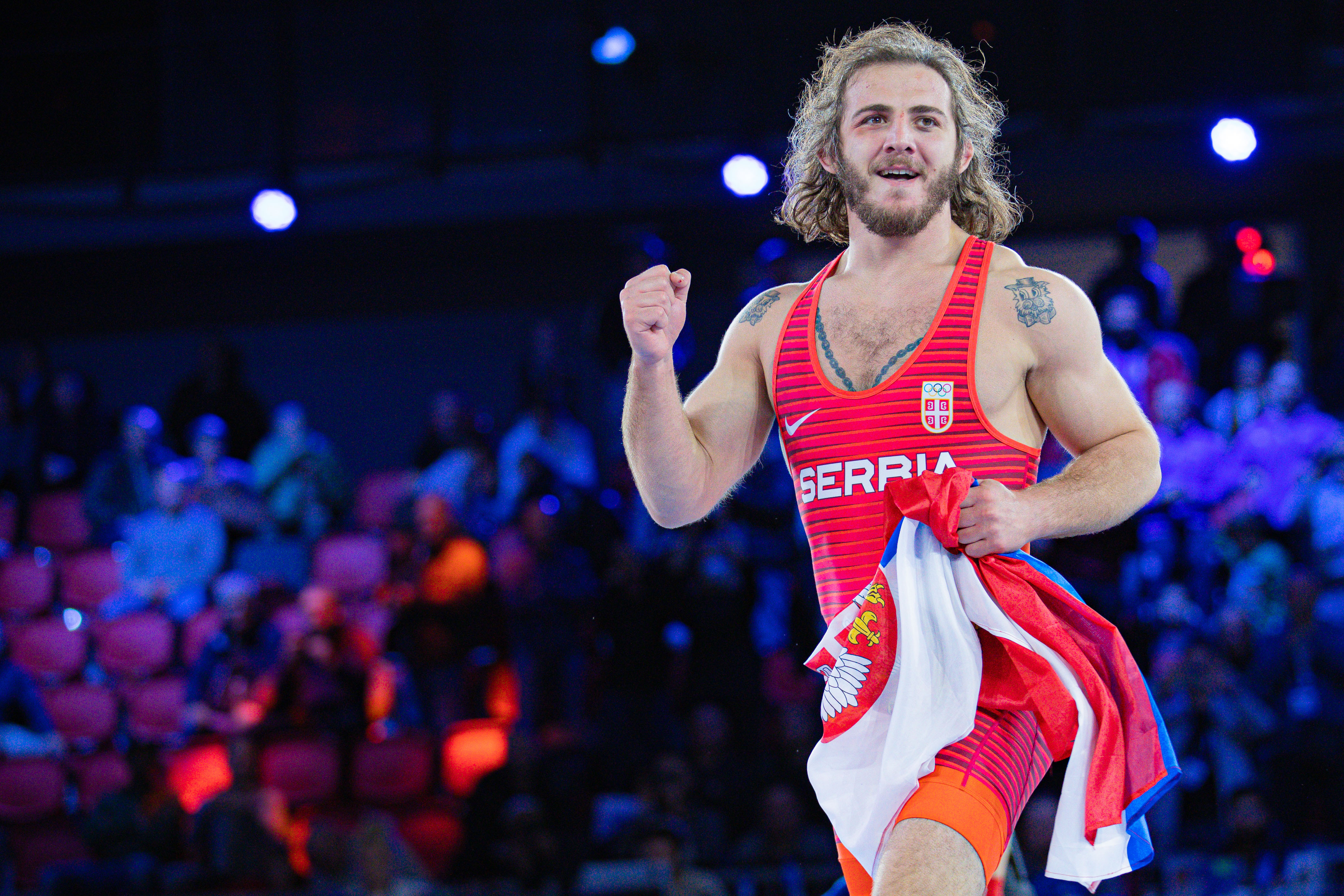 Zurabi DATUNASHVILI (SRB) won the gold at World Championships to be ranked one at 87kg. (Photo: UWW / Kadir Caliskan)

Zhan BELENUIK (UKR) won the gold medal at the Tokyo Olympics to collect 68 points and his bronze at the European Championships gave him 16 points as he reached the top spot after the Olympics.

Datunashvili's 106 points ensured the number position for him and shifted Beleniuk to the second spot.

Silver medalist at the World and European Championships to Datunashvili, Kiryl MASKEVICH (BLR) edged Tokyo Games silver medalist Viktor LORINCZ (HUN) by two points to claim the third spot. He had 58 points, thanks to the two silver medals which gave him 40 and 18 points respectively. 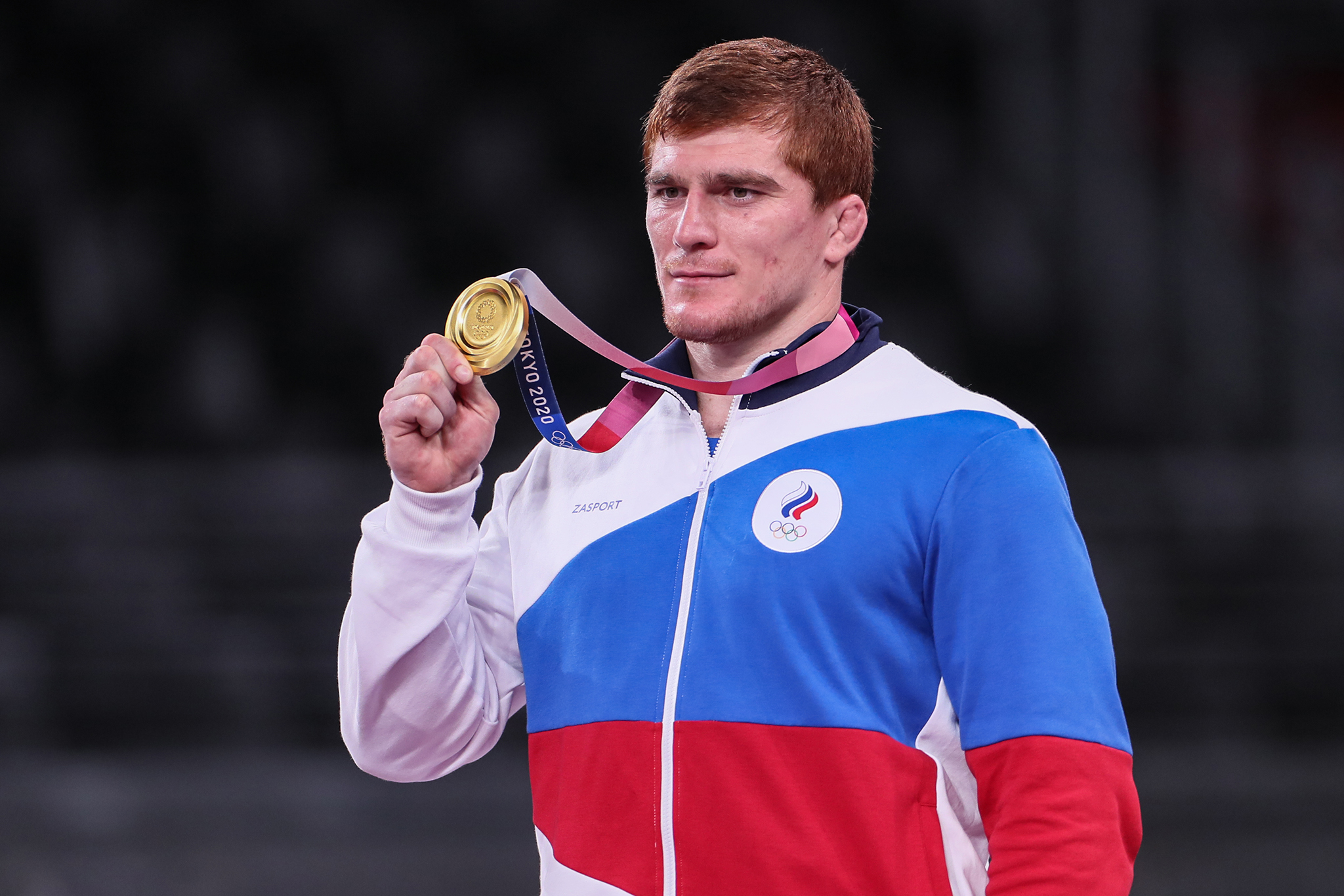 Olympic champion Musa EVLOEV (RWF) got the rank at 97kg for his exploits in Tokyo. (Photo: UWW / Martin Gabor)

Olympic champion Musa EVLOEV (RWF) and world champion Mohammadhadi SARAVI (IRI) ended the season with 102 points each but the former's gold medal at the Olympics superseded Saravi's bronze at the same event.

Evloev collected 68 points from the Tokyo Games and 20 from the gold medal-winning run at the European Championships in April this year. He also had a gold medal from Matteo Pellicone, giving him 14 more points.

Saravi got only 26 points for his bronze medal at the '21 Olympics but his gold in Oslo was worth 60 points, helping him climb from third place to first. The other 16 points were added from the gold he won at the Poland Open ranking event.

The third place was locked by Alex SZOKE (HUN) with 58 points, 40 of which came from the silver medal at the World Championships. He had finished fifth at the Tokyo Olympics and received 18 points for that performance. 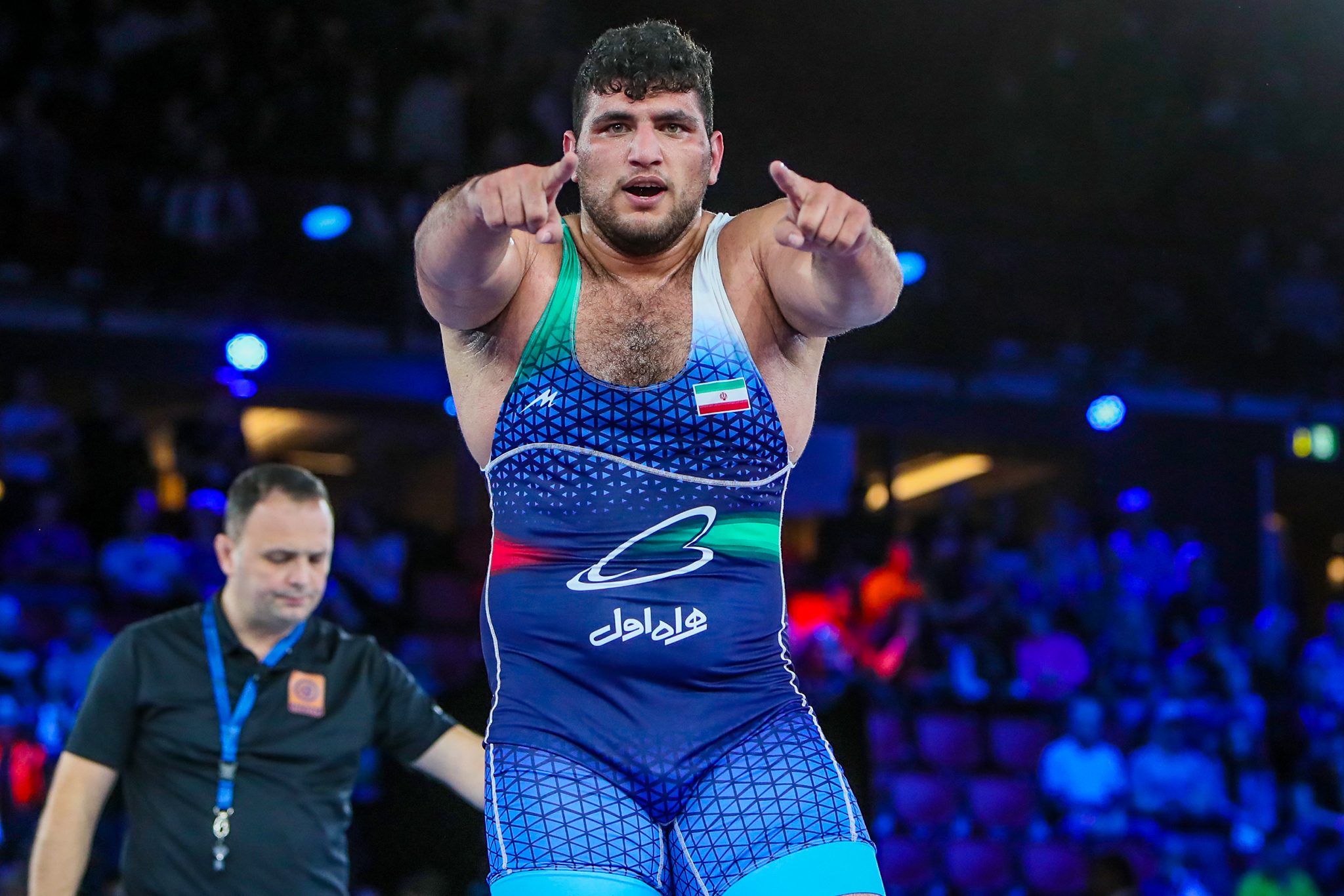 Aliakbar YOUSOFIAHMADCHALI (IRI)'s only loss this year came against compatriot Amin MIRZAZADEH (IRI) in the final of the Poland Open ranking event. That loss in sandwiched the gold medals he won at the Asian and World Championships.

The two gold and silver helped the Iranian collect 92 points and edge Iakobi KAJAIA (GEO) by five points to finish at the number one spot in the 130kg weight class.

Kajaia won medals at three events this year to claim the second spot. He won a silver medal at the Olympic Games, earning him 46 points. His bronze medal in Oslo was worth 25 points while the one at the European Championships earned him 16 points.

Four-time Olympic champion and Greco-Roman legend Mijain LOPEZ (CUB) finished in third place with only the points he collected after winning the gold in Tokyo.

Lopez, who last competed at a World Championships in 2015, earned 68 points for the gold medal in Tokyo, enough for him to be in the third spot.

World Championships silver medalist Zurabi GEDEKHUARI (RWF) also had 68 points but the weightage of Lopez's Olympic gold was more than that of the RWF wrestler's Oslo silver.