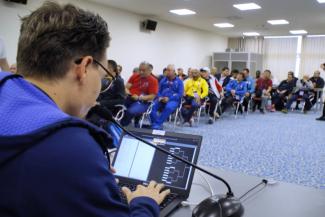 CORSIER-SUR-VEVEY, Switzerland (December 10) -- The world's oldest sport is showing signs that it could be among the most innovative.

United World Wrestling has announced the implementation of a new draw process for competitions that includes the use of Blockchain technology to ensure a certifiably random assignment of athletes into competition brackets. The system, a first in the Olympic movement, has been reviewed, approved and applauded by the International Olympic Committee.

"We are always striving to improve our operations and guarantee total transparency in our draw process," said United World Wrestling IT Director Sebastien Guenat. " I'm happy we can introduce Blockchain as it will save us time during the draw of weight categories and ensure absolute random assignments."

The draws themselves will now only occur once per style. In effect, the draws will mean that athletes, coaches, and fans will be able to see some brackets up to three days in advance of the competition.

"This is a major step forward for us because it allows coaches to know in advance the opponent of their wrestlers in order to adjust their preparation," said United World Wrestling Sports Director Jean-Daniel Rey. "The process is always under review and these changes signal that we are ready to adapt to the needs of our coaches, athletes, and fans."

For the 2020 season it was decided that for Continental and World Qualifiers only one draw would be done for the entire event and that the 2020 Olympic Games will continue to utilize one draw per day.

The Executive Committee also approved scheduling semifinal bouts (where nations obtain their quota for the Olympic Games) for two-day competition formats (World Championships and European qualifiers) after the gold and silver medal bouts of the weight categories of the previous day.

A number of other minor changes were made to age limitations, reporting of injuries, disqualifications, and medal reassignments in cases of doping. The changes can be viewed on the United World Wrestling website, here.