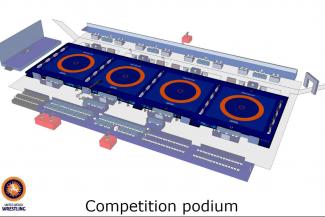 CORSIER-SUR-VEVEY, Switzerland (January 29) -- The United World Wrestling Sport Department, in collaboration with Megaphone Live, has created a comprehensive guide for those looking to organize wrestling events.

Over the past several years, as the professionalization of the international wrestling has increased and viewership boomed, stakeholders and organizers have requested consistent and clear guidelines for the Field of Play. The updated handbook is packaged to easily identify the location of everything from scoreboards, to furniture, and positions for television. The documents also provide you the exact measurements for items such as the award podium, tables for the technical delegate, and the boxes used by coaching staffs.

“We are very proud to offer this new tool to all our National Wrestling Federations but also to every Wrestling Organizer. With such precise documents, the preparation of the event will be managed smoothly, and the respect of our requirements will be easier to follow,” said UWW Sport Director Jean-Daniel REY.

“We have invested heavily in Wrestling’s sport presentation over the past six years and a fundamental part are details around the field of play and venue layouts,” said United World Wrestling president Nenad LALOVIC. “These documents are integral for us to deliver competitions seamlessly and we wanted to make this available to all our member federations. As UWW improves, the whole wrestling community should benefit.”

Yazdani, Punia to clash for Asian 86kg title as Iran, host Kazakhstan put 3 each in finals 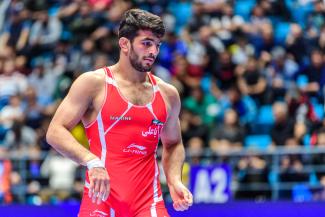 Two years after superstar Hassan YAZDANI (IRI) and up-and-coming Deepak PUNIA (IND) were slated to meet for the world title in a match that never came about, the two will finally tangle with an Asian gold on the line.

Yazdani, the reigning world and Olympic champion, and Punia both won their semifinal matches at 86kg during the early session to set up the long-delayed clash when the six-day Asian Championships wrap up with five freestyle finals on Sunday night in Almaty.

"I have not wrestled for one and a half years and I thought I should test myself in a lighter competition," said Yazdani, who won the gold in his only other appearance at the Asian Championships in 2018. "This is just to check how my body is and if it is ready. Thankfully, it was great start from the first bout today."

Yazdani is one of three Iranians in the finals, along with 2020 bronze medalist Mostafa HOSSEINKHANI (IRI) at 74kg and Kamran GHASEMPOUR (IRI), who will aim to add the 92kg gold to the one he won at 86kg in 2019.

Host Kazakhstan, led by 2019 world silver medalist Nurkozha KAIPANOV (KAZ) at 74kg, also has three finalists, while Uzbekistan, India, Mongolia and Kyrgyzstan have one each.

Punia, the 2018 world junior silver medalist, caught the wrestling world's attention when he made an impressive run into the final at the 2019 World Championships in Nursultan, which also served as the initial qualifier for the Tokyo Olympics.

However, he conceded the gold to Yazdani after being forced to default the final due to a left ankle injury suffered in his opening match.

"Definitely I will wrestle in the final," Punia said. "I missed a chance to wrestle him before because I was injured. It is always good to wrestle a good wrestler and that, too, when you know that you can meet him in the Olympics."

In getting another shot at one of the premier wrestlers in the world today by making the final in Almaty, Punia will have to lift his game much higher than what he showed in the early session.

Punia, the bronze medalist a year ago in New Delhi, could only manage a pair of activity-clock points in defeating Gwanuk KIM (KOR) 2-0 in the semifinals. That came after struggling to edge Bakhodur KODIROV (TJK) 4-3 in the quarterfinals.

"My body is still recovering from the fatigue of travel," Punia said.

Yazdani, on the other hand, was never challenged in chalking up a pair of technical fall victories.

The Iranian, who last lost in the first round of the 2018 World Championships, advanced to the final with an 10-0 rout in 2:53 of a valiant but overmatched Mustafa AL OBAIDI (IRQ), methodically scoring four takedowns and adding a gut wrench after the final one.

Al Obaidi showed remarkable resilience in chalking up a wild 12-11 victory in the quarterfinals over Mirlan CHYNYBEKOV (KGZ). Al Obaidi, who fell behind after blowing an 8-2 lead, came through with a takedown with 7 seconds left for the win.

Like Yazdani, Ghasempour advanced to the 92kg final riding a pair of technical falls. In the semifinals, he built up a 9-0 lead in the first period against Rustam SHODIEV (UZB) before finishing him off with a takedown early in the second.

Standing in his way to the gold is 2020 bronze medalist Tsogtgerel MUNKHBAATAR (MGL), who scored a 4-point takedown with 30 seconds left to clinch a 7-2 win over Elkhan ASSADOV (KAZ) in the other semifinal.

A number of the most exciting bouts of the day came at 125kg, where the massive combatants dispelled the notion of their weight class being one of plodding affairs. Certainly not when one match has 33 points.

Aiaal LAZAREV (KGZ) prevented Iran from having a fourth finalist with a stunning victory by fall over Amin TAHERI (IRI), slamming his opponent to the mat after falling behind 6-0.

In the final, he will face Oleg BOLTIN (KAZ), who chalked up a 3-0 victory over Amirjon NUTFULLAEV (UZB), who certainly must wish he had saved some of the 30 points he had scored in his first two matches.

Lazarev, who missed out on earning a place at Tokyo Olympics at the Asian Olympic qualifying tournament held last week in the same venue, spotted 2018 world U-23 bronze medalist Taheri a 6-point lead when the Iranian scored a takedown and two gut wrenches.

But Lazarev coolly locked up an arm and the head in the standing position, then slammed a stunned Taheri to the mat, securing the fall at 2:43.

"I was waiting for his attacks but I tried to control and catch his movement for my attack," Lazarev said. "I will do my best in the final to display what I can do with my wrestling. The result will only be seen on the mat."

Boltin, a Japan national collegiate champion when he competed at Yamanashi Gakuin University, gained an activity point in the first period, then added a driving tackle for 2 in the second to defeat Nutfullaev.

"I am wrestling at home so I wanted to perform good and make everyone happy," Boltin said. "I am feeling very good before every bout."

Boltin's day was not without its drama. In the quarterfinals, he had a slim lead over Sumit MALIK (IND) in the dying seconds when the Indian had a leg and was nearing a takedown. But Boltin hit a desperate back roll and lift for 4 points and a 7-1 win.

"The second bout against Sumit was very difficult because he was very strong," said Boltin, who started his day by scoring a takedown with 8 seconds left to knock off 2020 silver medalist Khunderbulga DORJKHAND (MGL) 3-2 in his opening match.

But nothing compares to what Nutfallaev went through earlier. After rallying for an 11-6 victory over Taiki YAMAMOTO (JPN), the Uzbek got into a free-wheeling shootout with Rustam ISKANDARI (TJK).

"Yes, I am very tired," Nutfallaev said. "My opponents were very good. I have not trained too much and I know that I need a lot of training and improvements to win.

"I had prepared well for the Kazak wrestler, but Boltin was very good in the semifinals."

As 74kg, Kaipanov kept on track to add to his 2018 Asian gold when his two takedowns trumped the two stepouts by Sumiyabazar ZANDANBUD (MGL) in a 4-2 victory.

In the other semifinal, Hosseinkhani advanced with an 11-0 technical fall over Atamyrat CHARLYYEV (TKM) as he looks to make his fifth Asian medal the third gold of his career.

The 61kg final will be a clash between 2017 Asian junior champion Jahongirmirza TUROBOV (UZB) and Adlan ASKAROV (KAZ).

Turobov defeated Sunggwon KIM (KOR) 4-0, while Askarov came out a 7-4 winner over Ravinder DAHIYA (IND), a fellow silver medalist (in different weight classes) at the 2019 World U-23 Championships.