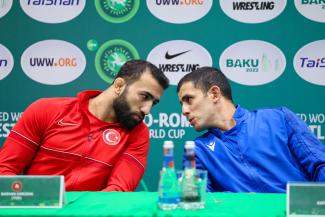 BAKU, Azerbaijan (November 4) -- When Rafig HUSEYNOV (AZE) came to know that Burhan AKBUDAK (TUR) will also be at the opening press conference for the Greco-Roman World Cup, he drove to the team hotel to pick up Akbudak.

Though aware that the two teams can compete in the World Cup final on Sunday, Huseynov puts that rivalry aside to set an example of hospitality, not just for Akbudak but for participants as well.

"We are friends," Huseynov said. "We have known each other for a long time."

At most competitions, the two would be busy with the preparations to win a medal at the World or European Championships. But the World Cup provides an opportunity for the wrestlers to engage more. The relaxed feel of the tournament also allows the wrestlers to mix with each other. 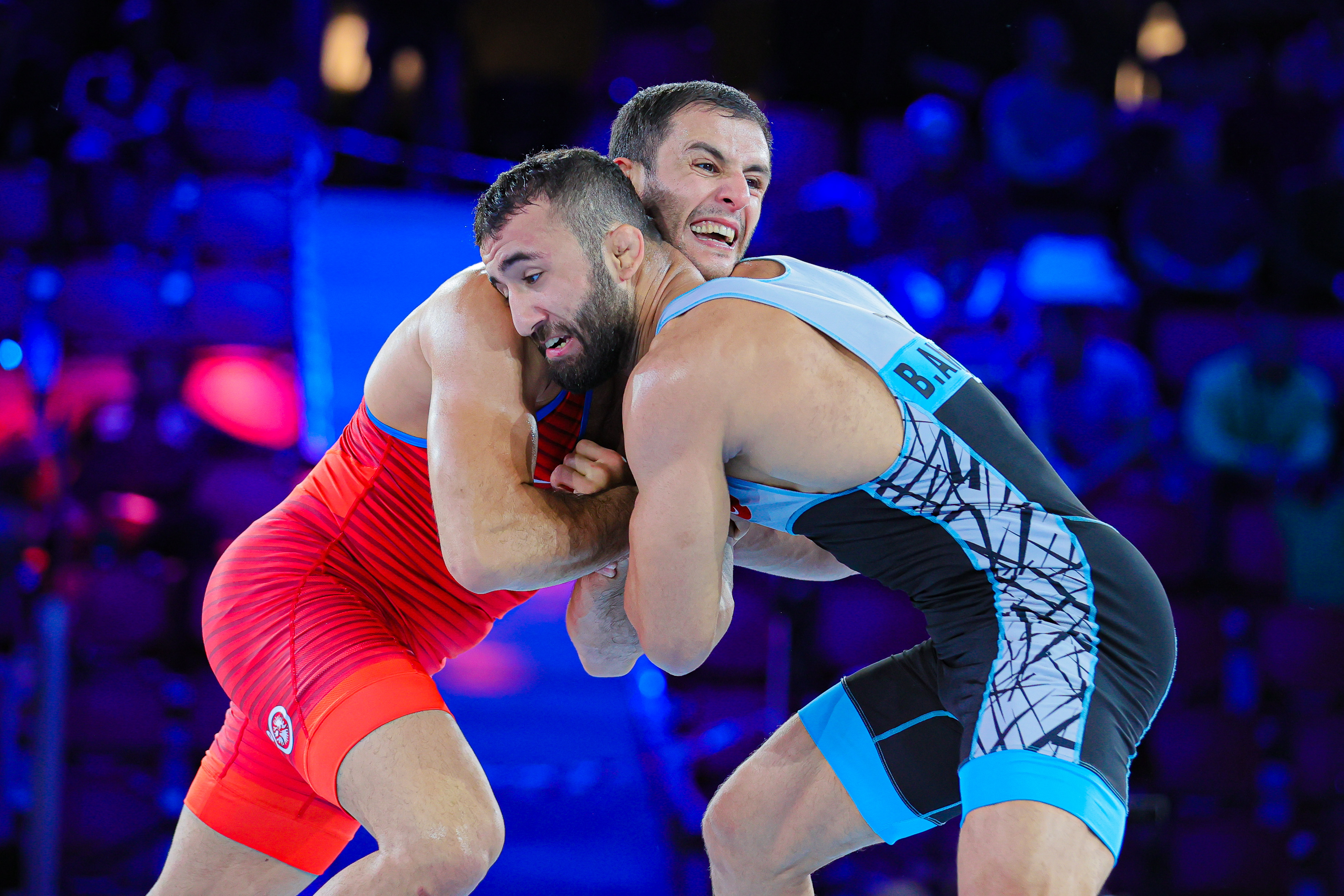 Huseynov and Akbudak have been wrestling together for the last six years. A common language, cultural similarities and the same weight class have helped them become even closer.

"We are like brothers in wrestling," Huseynov said. "We train together in camps and we meet every competition. So we became close friends."

Azerbaijan and Turkiye have hosted numerous training camps together and it was at one of these camps in 2015 that Akbudak and Huseynov, sparring partners, became friends.

But along with the friendship comes the rivalry. Since both compete in the same weight class, the two face each other on the mat at international tournaments.

Both have met three times with Huseynov winning two bouts and Akbudak winning one, in February 2022, incidentally in his hometown Istanbul. In 2021, Huseynov became a world champion at 82kg by beating Akbudak 2-1 in the gold medal bout.

Huseynov did not forget to respect Akbudak after winning the gold and carried the Turkiye flag along with the Azerbaijan flag during the celebrations.

Even in Baku, one can see flags of Azerbaijan and Turkiye being hoisted together on balconies, in malls and even in public transport denoting the close relationships between the two countries.

With another bout between the two peers looming at the World Cup, this time in Huseynov's backyard Baku, both are ready to put the friendship aside and put on a show for the fans.

"When we wrestle, we wrestle to win," Huseynov said. "That's the plan. But if I win or him, we win together."

Akbudak, the newly crowned world champion, echoed the same thoughts as he leads a talented Turkish team into the World Cup. Turkiye faces a strong Iran team in the morning session Saturday.

"We are very close friends for long," Akbudak said. "It has more to do with Turkiye and Azerbaijan being close countries now. We hope to win as well." 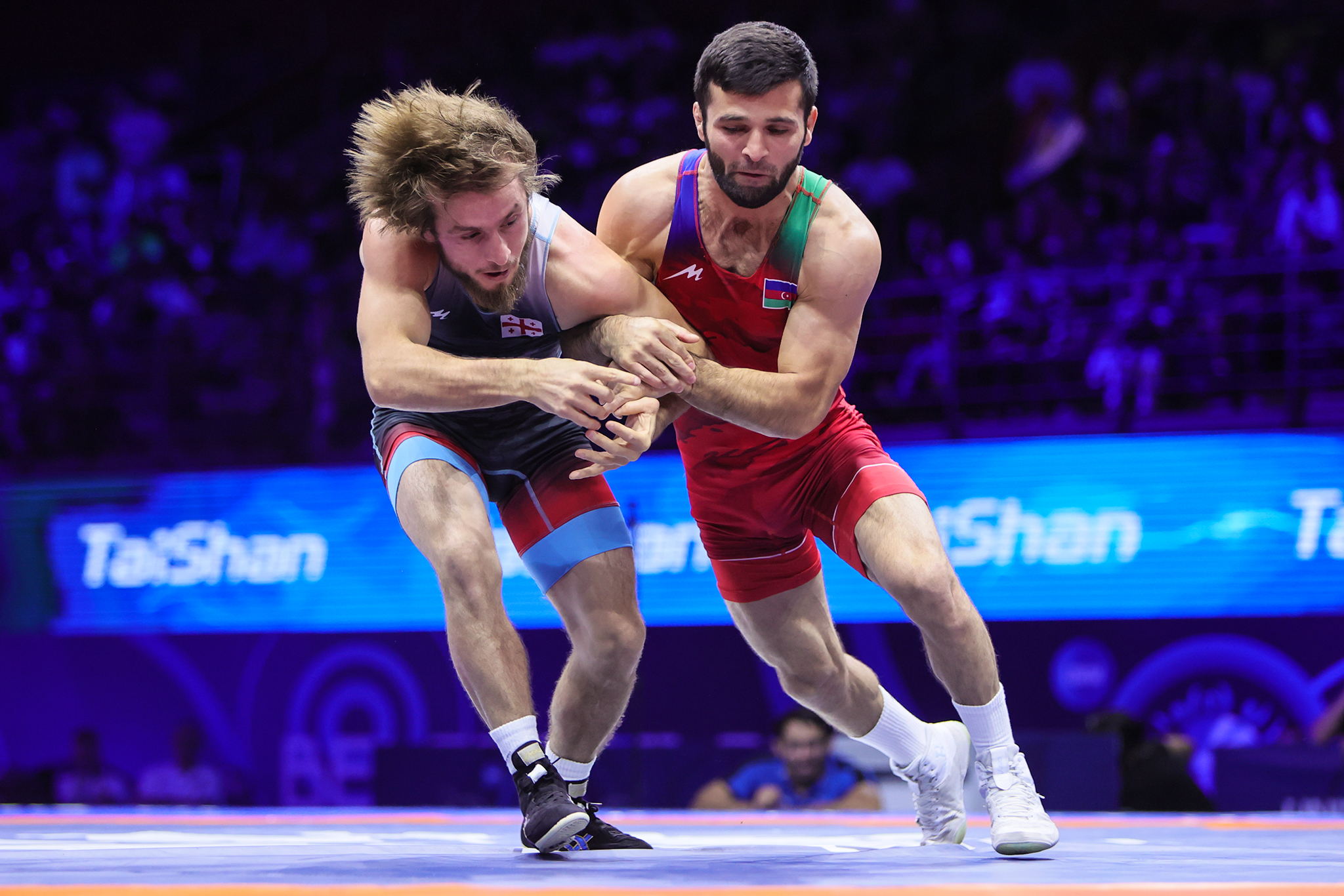 The Greco-Roman World Cup will see Azerbaijan and the All-World team in Group A after Serbia had to pull out due to COVID-19 cases in the camp.

Azerbaijan will hope to win this battle against the All-World team, participating for the first time in the World Cup, and reach the final.

"As you know the Greco-Roman team of Azerbaijan has been performing stronger," Eldaniz AZIZLI (AZE), a two-time world champion, said. "It doesn't matter if world champion or not, there is always more pressure when wrestling in the home country and in Baku.

"But we want to win and prove that Azerbaijan is a strong team."

The All-World team will have Nugzari TSURTSUMIA (UWW) at 55kg who would hope to get his first win over Azizli. Among other losses, two of them have come in the World Championships finals. 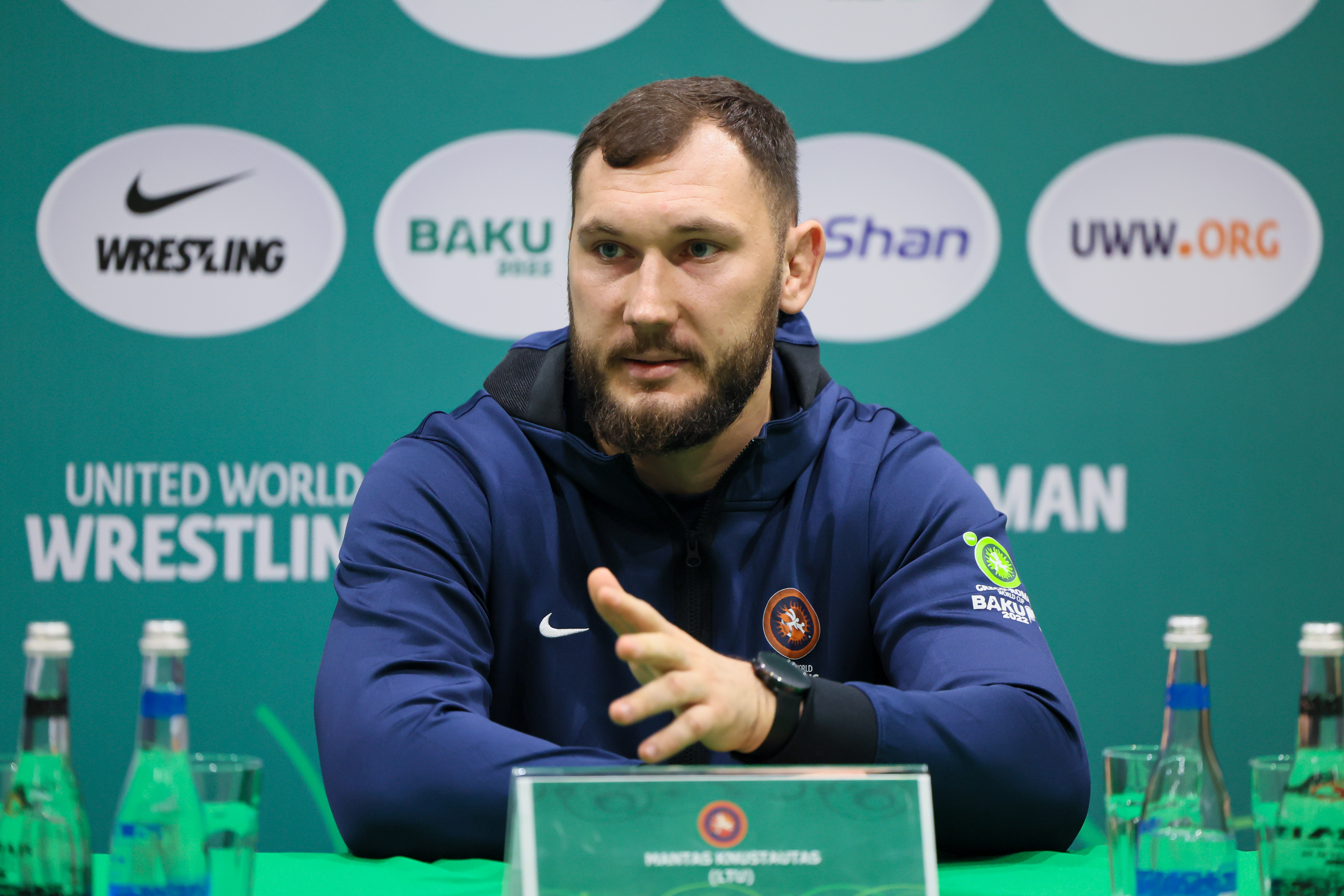 At 130kg, Mantas KNYSTAUTAS (LTU) will represent the team and was motivated to perform at the World Cup, an opportunity he thinks will rarely come his way.

"I may not ever be part of the World Cup as a team Lithuania," Knystautas said. "But I am motivated to wrestle with other guys in the world who are the best. It's a celebration of wrestling and I am proud to represent Lithuania."

In Group B, Iran will open the session against Turkiye before the two teams collide against Kyrgyzstan. In all likelihood, the winner of the Iran-Turkiye clash will reach the gold medal bout.

Wrestling begins at 1000 hours local time and will be live on uww.org and the UWW official app which can be downloaded from Google Play Store | Apple App Store. 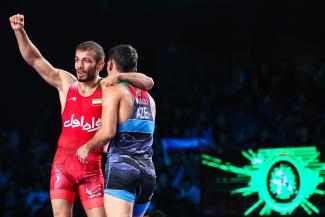 BAKU, Azerbaijan (November 6) -- What a Greco-Roman World Cup that was. Iran and Azerbaijan were neck-to-neck with both winning five bouts. But the classification points gave Iran the win. Iran claims the World Cup it last won in 2016. Azerbaijan finishes second for the second time in a row.

21:10: Iran wins the Greco-Roman World Cup! Aliakbar YOUSOFI (IRI) with a barrage of stepouts to beat Beka KANDELAKI (AZE) 6-3 and win the title for Iran on classification points. Kandelaki led 3-1 at the break but Yousofi broke Kandelaki and scored four stepouts in the second period along the fleeing point. Iran finishes with 21 classification points to 19 of Azerbaijan.

21:00: It all comes down to this bout. Aliakbar YOUSOFI (IRI) vs Beka KANDELAKI (AZE) at 130kg for the World Cup title. Both teams are tied for classification points with 18 each. The winner takes it all. Kandelaki begins with a turn from par terre to lead 3-0. Yousofi gets a stepout just before the break. He begins the second period with a stepout. Kandelaki's lead is cut to 3-2. A tiring Kandelaki can't stop the stepouts. He trails 5-3 with two minutes remaining. Another stepout and the win for Yousofi.

20:45: Mehdi BALIHAMZEHDEH (IRI) beats Arif NIFTULLAYEV (AZE) and Iran has cut it down to 5-4. Balihamzehdeh was trailing 2-1 but a takedown and turn to lead 5-2 and the win. The title comes down to the final bout at 130kg. A win is all that is needed.

20:33: Abolfazl CHOUBANI (IRI) the hero for Iran! He keeps Iran in the match with a 2-1 win over Murad AHMADIYEV (AZE). Azerbaijan still leads 5-3 but Iran will hope to win the final two bouts and make it 5-5 to stand a chance.

20:20: Now at 82kg, Mohammadhossein MAHMOODI (IRI) will look to bring back Iran in this. But Rafig HUSEYNOV (AZE) with exposure when he was put in par terre to lead 2-1. He locked Mahmoodi's elbow to get the points. A par terre position for Huseynov in the second period. Mahmoodi is cautioned for two points but no more damage was done. Huseynov wins 5-1. Azerbaijan leads 5-2.

20:10: This is now turning out to be a difficult one for Iran. Sanan SULEYMANOV (AZE) with a controlled 7-1 win over Aref HABIBOLLAHI (IRI) at 77kg. The win has propelled Azerbaijan to a 4-2 lead. Two more wins out of four bouts will seal it for Azerbaijan.

19:50: A challenge that Iran will regret if the final result doesn't go in its favor. Mohammadreza ROSTAMI (IRI) was leading Ulvi GANIZADE (AZE) 3-3 with over a minute remaining. A challenge for negative wrestling but it was clean. Ganizade got the 4-3 lead and the win. Azerbaijan is now in the lead 3-2.

19:35: Two young stars. Two of the best at 67kg. Two wrestlers who will be dominant for a long time. Seyed SOHRABI (IRI) and Hasrat JAFAROV (AZE) on the mat now. Sohrabi gets the early call for passivity. But he doesn't get any turn from par terre. Relentless from both wrestlers. Sohrabi will go at the break leading 1-0. Sohrabi with a body lock and tries to throw Jafarov but, are you kidding me, Jafarov with a one-handed counter for four! Iran challenges the call but it is a clear four. Jafarov leads 5-1. A victory for Jafarov at 67kg over Sohrabi. The crowd is electric.

19:15: Nihat MAMMADLI (AZE) replaces an injured Murad MAMMADOV (AZE) at 60kg. He is facing Mehdi MOHSEN NEJAD (IRI). A passivity call against Mammadli but Mohsen Nejad doesn't get the turn. A stepout for Mohsen Nejad as he leads 2-0 at the break. In the second period, Mohsen Nejad gets the advantage again. This time he turns Mammadli but gets stuck on the second attempt. Mammadli with a turn as well to make it 5-4. But Mohsen Nejad hangs on for the win. It's tied 1-1.

Now it is time for the big match! Iran is taking on Azerbaijan in Baku for the World Cup.

18:40: What a win for Nikoloz KAKHELASHVILI (UWW)! He beats two-time world champion Metehan BASAR (TUR) 1-1 at 97kg. The win all but confirms the third place for the All-World team. Mantas KNYSTAUTAS (UWW) has to avoid getting pinned at 130kg.

18:30: Ali CENGIZ (TUR) ties with for Turkiye! He beats Alex KESSIDIS (UWW) 4-2 at 87kg and it has become a thriller. The All-World team was looking very close to winning this but it has turned around.

18:20: A rematch of the World Championships final coming up at 82kg between Burhan AKBUDAK (TUR) and Jalgasbay BERDIMURATOV (UWW). The first passivity is against Akbudak and Berdimuratov scores a turn to lead 3-0. He starts the second period with a stepout. Akbudak then goes behind and scores a four before two turns make it 8-4. A point against Akbudak for being passive but that doesn't change the final result of the bout as Akbudak wins 8-5. The All-World team still leads Turkiye 4-3.

18:10: A long bout between world silver medalist Zoltan LEVAI (HUN) and Yunus BASAR (TUR) and it is the Turkiye wrestler who comes out on top 7-6. Basar first got the turn from par terre before a surprise arm throw for a 7-3 lead. Levai did score a takedown but Basar held on top a 7-6 win. Turkiye now has two wins from six bouts.

17:55: A battle between the two world bronze medalists and Selcuk CAN (TUR) looked like winning the bout after he got the turn from par terre against Andrii KULYK (UWW). But Kulyk jumped over and pinned Can for the win. The All-World team now leads 4-1.

17:40: Murat FIRAT (TUR) brings Turkiye back into this match. He beats Joni KHETSURIANI (UWW) 1-1 as the two exchanges passivity points in this 67kg bout. The All-World team still leads 3-1 but Turkiye is crawling back.

17:32: World silver medalist Leri ABULADZE (GEO) makes it 3-0 for the All-World team. He beats Ahmet UYAR (TUR) 3-1 after getting a turn in par terre.

17:20: At 60kg, Mukremin AKTAS (TUR) and Aidos SULTANGALI (UWW) going up against each other. Aktas gets the 1-0 lead for the passivity. But he fails to get any action. Sultangali goes behind and scores a throw for four. He continues the action for a gut wrench to lead 6-1 at the break. Aktas is called passive in the second period and Sultangali was happy to get the 7-1 win. A 2-0 lead for the All-World team.

17:05: The first bout of the Turkiye vs All-Star team is at 55kg between Muhammet CAKIR (TUR) and world silver medalist Nugzari TSURTSUMIA (GEO). Early action in the bout as Tsurtsumia takes a 4-0 lead. But he tries an arm throw which Cakir defends and scores a takedown. He then goes for an arm throw and gets four to lead 6-4. A stepout makes it 7-4. Just before the break, Tsurtsumia gets a takedown on the edge. Turkiye challenges the call but loses. Cakir leads 7-7 on criteria at the break. Tsurtsumia is on the attack in the second period and scores a stepout. Cakir struggling with his conditioning now. A takedown for Tsurtsumia as he builds a 10-7 lead. No more scoring action in the bout and Tsurtsumia gives All-World team the lead.

17:00: Welcome to the medal bouts of the Greco-Roman World Cup in Baku. Turkiye will take on the All-World team for third place.