Wrestling and Basketball Join-Up for Athlete Career Program in Sweden 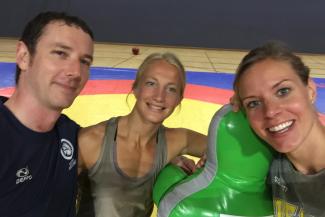 Workshop time was scheduled for 90 minutes before the trainers introduced the day's theme of how to create, manage and achieve athletic and personal goals. For real world examples Mattsson and Egnell (a former member of the Swedish women's basketball team) shared the secrets of their goal setting techniques. The presented outlined how much effort was needed to succeed at the highest levels, with Mattsson telling the particpants that she's already spent more thab 12,000 hours and twenty years chasing her Olympic dream.

Egnell connected with many of the wrestlers and took her efforts back to the courts for a short basketball activity after leaving the classroom. The Swedish basketball star soon discovered that wrestlers also preferred REGBOL - a combination of wrestling and basketball. Unfortunately Egnall also discovered how terrible most wrestlers can be at basketball!