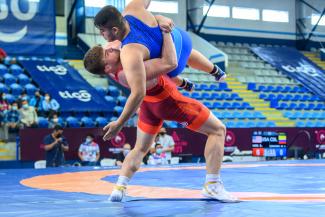 UFA, Russia (August 12) --- After a 729-day layoff due to the worldwide pandemic, United World Wrestling will host the Junior World Championships for the first time since the '19 Tallinn Junior Worlds.

Over 500 athletes from 52 different nations will compete in Ufa, Russia, August 16-22 for junior world gold. Freestyle kicks off the schedule of events next Monday, with women's wrestling and Greco-Roman action following. 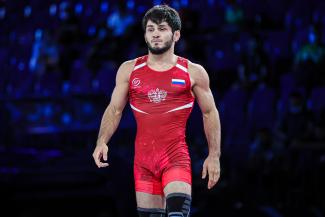 At the last Junior Worlds Championships in 2019, Russia returned home with four gold, two silver and a bronze medal to claim the team title. Two years later, they repeated the same but with five gold, one silver and two bronze medals.

As the Junior World Championships concluded in Ufa, Russia, the Greco-Roman celebrated their title win at home with 183 points while Iran finished second with 130 points. Azerbaijan were third as they managed only 101 points.

Russia had finished second in both the freestyle and women's wrestling competition with Iran and USA winning those team titles respectively.

Dinislam BAMMATOV (RUS) and Evgeni BAIDUSOV (RUS) were the two gold medalists for Russia Sunday while three had won the top medal Saturday. Aleksei MILESHIN (RUS) was the only Russian wrestler to reach the final but not winning the gold.

A bit of history was also created at the Ufa Arena as Marcel STERKENBURG (NED) defeated Karen KHACHATRYAN (ARM) 6-3 in 82kg final and became the first wrestler from the Netherlands to win a junior Worlds gold in the last 43 years.

The final gold medal of the night was won by Pavel HLINCHUK (BLR) who looked in some serious form in the tournament with five dominating wins over the course of two days.

Bammatov, the Dagestan wrestler, defeated Saeid ESMAEILI LEIVESI (IRI) 7-3 in the 60kg final to get the Russian team going. He was awarded a point for the Iranian's passivity to open the scoring. In par terre, Bammatov lost top position after slipping off the right side gut wrench. He surrendered a reversal, but stopped an Iranian gut attempt, planting Esmaeili Leivesi on his back for the two exposure points. With the action back on their feet, Bammatov snapped Esmaeili Leivesi down and spun behind for a takedown. He went right into a gut wrench and carried the 7-1 lead into the second period.

Bammatov gave up two stepouts in the closing period, but capped off his run to the 60kg junior world title with a 7-3 victory.

The second gold medal for Russia was won by Evgeni BAIDUSOV (RUS) as he overcame Giorgi CHKHIKVADZE (GEO) in a tight final to win 3-2. In the most evenly matched finals of the night, Baidusov narrowly edged ahead when he struck first. He tried hitting a duck under early in the first period, but as Chikhikvadze defended the attempt from his knees, the Russian threw a headlocked and put two points on the board. His Georgian opponent reversed him to his back for the exposure and gained the 2-2 criteria advantage.

To the dismay of the Georgian fans in the second period, Baidusov toed the line and circle to the center before pushing Chkhikvadze out for the 3-2 lead.

Baidusov's medal winning celebrations were marred by some unruly behaviour from the Georgian fans in the stands which was brought to the attention of the organizing committee as well.

But Pavel HLINCHUK (BLR) ruined Russia's perfect final record in the 97kg finals as he handed Aleksei MILESHIN (RUS) an 11-0 thrashing to Belarus their first gold medal of the Greco-Roman competition.

He hit back-to-back guts after earning an inactivity point and controlled the comfortable five point lead. With less than 20 seconds left in the opening period, the Belarusian tossed Mileshin for two points and his lead grew to 7-0.

Before the whistle sounded in the first, he backed his heels to the edge of the mat and planted Mileshin on his back for four points and earned the 11-0 world-title winning victory.

The historic medal for the Netherlands won by Marcel STERKENBURG (NED) came after his brother failed to do the same Sunday. The twin brother Tyrone finished with a silver medal after suffering a defeat in the 77kg final.

But the 82kg final began with Karen KHACHATRYAN (ARM) scoring two points from a left-side gut wrench after being awarded a point for Sterkenburg’s inactivity.

But it was all Marcel STERKENBURG (NED) in the second period. He bolted out to an early takedown in the first period and cut Khachatryan’s lead to 3-2. At the two-minute mark, Sterkenburg scored a stepout and gained the 3-3 criteria lead before his Armenian opponent was hit with inactivity.

Leading 4-3, Sterkenburg gutted Khachatryan and increased his lead to 6-3, and ultimately gave the Netherland’s their first junior world title in the last 43 years.

The 67kg gold medal went to Hasrat JAFAROV (AZE) as the cadet world champion managed to shutout Sahak HOVHANNISYAN (ARM) 7-0 in the final.

The match was chippy and barred with referee stoppages. Jafarov earned top position in par terre after Sahak HOVHANNISYAN (ARM) was called for inactivity. He was unable to pick up exposure points, but scored two correct throw points and led 3-1 after the opening period.

A pair of accidental head butts slowed down the second period and brought medical attention for Jafarov. The first two were deemed accidental, but after a third headbutt in the period, Jafarov’s opponent was hit with a caution-and-two – giving the Azeri wrestler the 5-0 lead.

Shortly after, Jafarov pushed Hovhannisyan to the edge and stopped a double-overhook throw attempt and extended his lead to 7-0. He defended it until the clock expired.

The focus now shifts to the Senior World Championships which begins in Oslo from October 2 to 10.