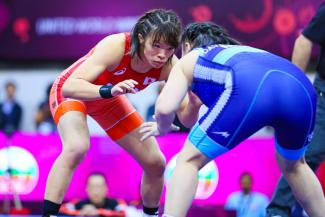 TOKYO, Japan (July 22) – In her bid for a second straight Olympic title, Risako KAWAI (JPN) had to beat a fellow champion from the Rio 2016 Olympics just to make the Japanese team. At the Tokyo Games, she might have to contend with yet another Rio gold medalist.

Kawai, the top seed and reigning world champion at women's 57kg, faces a possible showdown with unseeded Helen MAROULIS (USA), whose stunning victory over the legendary Saori YOSHIDA (JPN) in the 53kg final made her the first American woman to win an Olympic wrestling gold and was one of the highlights of the Rio competition.

"In 2016, it was a honor to wrestle Yoshida, and it will be honor to wrestle Risako Kawai, and any woman here," Maroulis said Monday at the U.S. team base in Nakatsugawa, Gifu Prefecture, in central Japan.

Others expected to be in the thick of the medal hunt are Rio 2016 silver medalist Valeria KOBLOVA (RUS), 2019 world silver medalist Ningning RONG (CHN) and the two bronze medalists at the 2019 worlds, Odunayo ADEKUOROYE (NGR) and Iryna KURACHKINA (BLR).

Kawai won her Rio gold at 63kg, having conceded the 57kg class to her venerated senior teammate Kaori ICHO (JPN), who went on to become the first four-time women's Olympic champion. But this time, she decided to challenge Icho head-on for the place at 57kg. One reason is that it opened up 62kg for her younger sister Yukako as the two aim to achieve a dream of sibling Olympics golds.

Kawai came out the winner over Icho in an intense qualifying process that drew global attention for the 2019 World Championships in Nur-Sultan, where she won the gold to secure her Olympic ticket. That gave her a third straight world title, after winning in 2017 at 60kg and in  2018 at 59kg.

In her only international competition since the 2019 worlds, she helped Japan win the World Cup later that year, then captured a fourth career Asian title in 2020. With the exception of a semifinal defeat at 62kg at the 2018 Asian Games to Orkhon PUREVDORJ (MGL) that was later annulled when the Mongolian tested positive for doping, Kawai has not lost an international match since 2015.

In Rio, Kawai was the youngster on the team, a collegian among veterans like Yoshida and Icho. "I don't think any of the opponents had me on their radar in Rio," Kawai said recently. "If I had lost, I think people would have thought, 'Well, it's just her first appearance.'"

Now at 27, she is the team leader, and says she is taking a different attitude into the Tokyo Games.

"I came up watching Saori and Kaori from behind. Now I think there are kids watching my behavior. My predecessors were too great, so I don't know if it's possible to do the same thing. However, I believe that if I do my best, it will carry over to the next generation."

While Kawai was establishing herself as one of the world's top female wrestlers, Maroulis spent a portion of her post-Rio period battling injuries that included a debilitating concussion. She won a second world title in 2017 at 58kg, but a year later in Budapest was dealt a opening-round loss by fall at 57kg by Alyona KOLESNIK (AZE).

The 29-year-old, who had contemplated retiring as the injuries took their toll, would not take to the mat again for an international match until the Pan American Olympic qualifying tournament in March 2020, where she earned the U.S. spot at 57kg. She then defeated Jenna BURKERT (USA) at the U.S. trials.

"This time is very different, because there were a lot of injuries over the last couple of years," Maroulis said. "But I still was able to prepare, and I feel I am prepared for this tournament. I have just as much confidence this time as I did last time."

This year, Maroulis won the Grand Prix de France, but was dealt a wakeup call at the Poland Open when she was handed a 12-0 technical fall loss in the quarterfinals by Adekuoroye. She then lost in the repechage to Tetyana KIT (UKR), a two-time European silver medalist who will also be in Tokyo after just being named as a late replacement for injured Alina HRUSHYNA (UKR).

"Losing in Poland had a really good effect because it showed me what I needed to change, and I made those changes," Maroulis said.

Given all that she has been through to get to chance to win a second straight Olympic title, Maroulis goes into Tokyo with a different perspective.

"When I won the gold medal in Rio, it was a dream come true and I'm so thankful for that," she said. "But it made me realize that the journey was everything. And so this time around, I really appreciate the journey, and I'm still going for the gold medal, but I know that this is the part in life that will shape me as a person."

The 27-year-old Adekuoroye, appearing in her second Olympics, is aiming to become the first female gold medalist from Africa, which has had just one medalist -- a bronze at 58kg from Marwa AMRI (TUN) -- in the four Olympics since women's wrestling was added to the program.

Adekuoroye made her breakthrough at the 2015 World Championships in Las Vegas, where she struck it rich by taking a bronze medal at 53kg. But her Olympic debut the next year came to an abrupt end with a loss to Sofia MATTSON (SWE).

She made history by making it the final at the 2017 World Championships, where she lost to Haruna OKUNO (JPN), and won a bronze in 2019 to secure her berth at the Tokyo Olympics after losing to Kawai in the semifinals.

Adekuoroye has had a good runup to the Tokyo Games, winning golds at the Matteo Pellicone Tournament and African Championships in 2020 and following up her victory over Maroulis in Warsaw by taking the gold with a victory in the final over Kurachkina.

China's Rong won the senior world title at 57kg in 2018, but lost in the 59kg final at the world U-23 three weeks later. In 2019, she won her second straight Asian title with a victory in the final over Myong-Suk JONG (PRK), who had knocked off Icho in the semifinals.

At the 2019 worlds in Nur-Sultan, Rong defeated Kurachkina en route to the final, where she showed some spunk in a 9-6 loss to Kawai in which she fought back after falling behind 9-0.

It looked like a rematch was in the cards at the World Cup later that year, but China opted to move Rong up to 59kg. Asked about not facing Kawai at the time, she replied, “I’m really looking forward to facing her and getting revenge.”

Koblova will certainly be one to watch. The 28-year-old Rio 2016 silver medalist was given the nod for her third Olympic appearance by the Russian federation over Veronika CHUMIKOVA (RUS), who had secured the Olympic berth at the final World Qualifying tournament.

In the 58kg final in Rio, Koblova came within seconds of denying Icho her historic fourth gold medal, but gave up a takedown at the buzzer and was dealt a 3-2 loss that meant settling for the silver medal.

Physical pain came a year later, when she suffered a serious knee injury at the 2017 World Championships in Paris. In addition to giving birth, she sat out for three years before returning for the Russian Championships in September 2020.

This year, Koblova has a pair of fifth-place finishes at the European Championships (at 62kg) and Poland Open, where she lost to Adekuoroye in the semifinals and Kit in the bronze-medal match.

She and Kawai have met once before, in the final at the 2015 World Cup, which Kawai won 5-1. But it was at another World Cup where Koblova imprinted her mark with Japanese fans.

In 2012, Koblova (then known by her maiden name of Zholobova) scored a stunning victory over Yoshida, making her one of just three non-Japanese in history to ever claim a win over the Japanese legend.

Although Japan defeated Russia for the title of the team tournament, the sight of Yoshida sobbing on the victory podium still remains an indelible image.