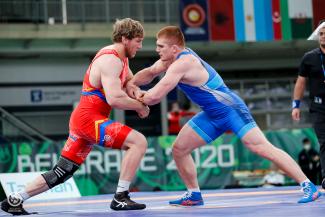 TOKYO, Japan (July 22) – One of wrestling's greatest rivalries could be renewed in Tokyo if the seeds hold. Musa EVLOEV (RUS) and Artur ALEKSANYAN (ARM), two of Greco-Roman's biggest stars, enter Tokyo Games as the top two seeds at 97kg. They have combined to win every world or Olympic title in this weight category since 2014.

Aleksanyan, seeded No.2, will be looking to claim his second consecutive Olympic gold medal and third Olympic medal. The Armenian wrestling great won world and Olympic titles every year from 2014 to 2017. The tide turned in 2018 when Evloev knocked off Aleksanyan in the semifinals of the World Championships in Budapest on his way to capturing gold. Evloev repeated as world champion in 2019, beating Aleksanyan for the gold medal.

In March, Evloev cruised to a gold medal at the Matteo Pellicone Tournament, a Rankings Series event. It marked his third gold medal of the Series. Evloev had two technical superiority victories in three matches and did not surrender a single point in the competition held in Ostia, Italy. A month later, Evloev earned his second European crown, beating Balasz KISS (HUN) 8-0 in the gold medal match and outscoring his four opponents by a combined score of 28-1. The 28-year-old Evloev enters the Tokyo Games as the top seed and odds-on favorite to win gold at 97kg.

Saravi, a 2020 Asian champion, is seeded third at 97kg. The Iranian won a gold medal at the Asian Olympic Qualifier. In June, Saravi dominated at the Poland Open, beating compatriot Mehdi BALIHAMZEHDEH (IRI) in the finals. That victory earned Saravi a spot on Iran's Olympic team.

The fourth seed is Tadeusz MICHALIK (POL), a bronze medalist at the Grand Prix of Zagreb. He was fifth at the 2019 World Championships in Nur-Sultan.

Cenk ILDEM (TUR) is one of the more accomplished unseeded wrestlers in this weight category. Ildem was a bronze medalist at the 2016 Olympic Games in Rio. He is also a three-time world bronze medalist, with his most recent one coming in 2019.

Mihail KAJAIA (SRB) won back-to-back bronze medals at the World Championships in 2018 and 2019. He has also been a silver medalist at the Asian Championships.

Giorgi MELIA (GEO) is a past junior world champion and multiple-time U23 world medalist. He won a gold medal this year at the Grand Prix de France Henri Deglane.

Kiril MILOV (BUL), a 2018 world silver medalist, qualified for the Tokyo Olympics at the European Qualification Tournament held in March.

Uzur DZHUZUPBEKOV (KGZ) is an accomplished wrestler who won a gold medal at the 2019 Asian Championships and has multiple Asian medals.