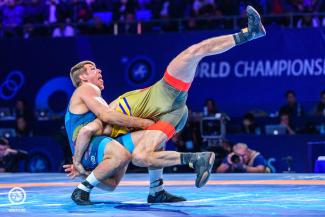 TOKYO, Japan (July 22) --Two-time defending Olympic champion Roman VLASOV's (RUS) reign as the top wrestler will be over after nine years. The winner of the gold medal in 2012 and 2016 failed to win the spot on the Russian team, which means a new Olympic champion will be crowned at this weight.

While there are many front-runners, this weight can very well be called the veteran's weight as seven wrestlers, all capable of winning a medal in Tokyo, are above the age of 30 years.

The top wrestler will be world champion and a silver medalist from Lond Olympics at 66kg Tamas LORINCZ (HUN). He won the gold in Nur-sultan to qualify but has struggled for consistency. Making his fourth trip to the Games, Lorincz, 35, will be expected to end the nine-year drought for himself. He has a silver medal at 2017 and 2018 Worlds and a bronze from 2014.

His recent performances do make him the top contender for the gold medal but in his path will be the experienced world champion from 2018 and another 35-year-old Aleksandr CHEKHIRKIN (RUS). He won the place after a special wrestle-off in Russia. He will now try to keep the gold medal in Russia.

But both will be checked by Mohammadali GERAEI (IRI) as the world bronze medalist will also lay claim to the top medal in Tokyo. With his younger brother wrestling at 67kg, it will be a great moment if both brothers can medal at the same Olympics. For that, Geraei will have to go through Loricz as they are seeded fourth and first respectively.

At the World Championships in 2019, Alex BJURBERG KESSIDIS (SWE) stunned everyone by reaching the final. He defeated Geraei and Karpet CHALYAN (ARM) in the quarters and semis respectively. Since he is seeded second, he can have a potential rematch with Chalyan in the semis.

Kessidis will fancy his chances to win the gold as he only lost to Lorincz in the final and with the Hungarian finding it difficult to cut, it's a chance to make a name for himself.

That is, if he can go past Chalyan. The Armenian lost the Worlds bout 2-5 to Kessidis but avenge that loss will take him to the final in Tokyo. The former junior World and European champion has lost to Geraei.

Apart from the two youngsters, another young wrestler who can spring a surprise is Akzhol MAKHMUDOV (KGZ). Popular for his high-scoring bouts, Makhmudov has all the qualities to have a deep run in Tokyo. His youth along with the big throws make him a big threat. He has a win over Demeu ZHADRAYEV (KAZ) who will also be present in Tokyo. The 31-year-old was selected after he beat the qualifier and London Olympian Askhat DILMUKHAMEDOV (KAZ).

Jalgasbay BERDIMURATOV (UZB) will also present his case since being the world bronze medalist in Nur-sultan. A 82kg wrestler, Berdimuratov will have to manage his weight and the two-day weigh-in if he reaches the second day.

His action-packed wrestling has been a treat to watch at the recent tournaments and if can continue that, a lot of wrestlers will find it difficult to defend against him.

Two dark horses at this weight are Aik MNATSAKANIAN (BUL) and Rafig HUSEYNOV (AZE). Both qualified from the World Qualifiers in Sofia,

The Bulgarian is jumping up a weight as he wrestles regularly in the 72kg weight class while Huseynov has managed his weight cut so well that he looks like a fitter athlete than his previous self.

Most wrestlers at this weight are giving it a last shot so expect a lot of surprise wins and end of careers.