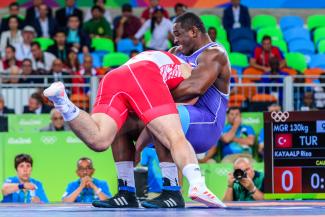 TOKYO, Japan (July 22) – Mijain LOPEZ NUNEZ (CUB) will look to make history at the Tokyo Olympics. The Cuban wrestling legend, who enters unseeded, has a chance to become the first four-time Olympic champion in Greco-Roman and the second wrestler in any style to accomplish the feat. (At the 2016 Rio Olympics, Japan's Kaori ICHO became the first four-time Olympic champion wrestler in any style.) The 38-year-old Lopez is not only unbeaten at the Olympic Games since 2008, but he has won five world titles and three world silver medals. Two of his three losses in world championship competition have come to Riza KAYAALP (TUR), who enters the Tokyo Olympics as the top seed at 130kg.

The 31-year-old Kayaalp has compiled an international wrestling resume that puts him among the greatest Greco-Roman heavyweights ever. He is a four-time world champion and a three-time Olympic medalist. The only accomplishment that has eluded him is an Olympic gold medal. His only losses at the Olympic Games have come to Lopez. At the 2012 London Olympics, Lopez defeated Kayaalp in the semifinals. Four years later, the two met for the gold medal at the Rio Olympics, with Lopez earning a 6-0 victory. He has defeated Lopez in two world championship finals, 2011 and 2015. In April, Kayaalp won his 10th senior European Championships title in Warsaw, Poland.

World champion Sergey SEMENOV (RUS) will be after his second Olympic medal. He won a bronze medal at the Rio Olympics, with his only loss coming to Lopez in the semifinals. Two years later, Semenov won a gold medal at the 2018 World Wrestling Championships in Budapest, Hungary. In December, Semenov won gold at the Individual World Cup in Belgrade.

Second-seeded Abdellatif MOHAMED (EGY) won a silver medal at the Matteo Pellicone Tournament in March. He won gold at the African and Oceania Olympic Games Qualifier in early April.

Muminjon ABDULLAEV (UZB), seeded No.3, is competing in his third straight Olympics. He has won multiple medals at the Asian Championships and a gold medal at the 2018 Asian Games.

World bronze medalist Iakobi KAJAIA (GEO) is a medal contender in the weight category. He reached the finals of the European Championships this year before falling to Kayaalp. Kajaia was a gold medalist at the 2019 European Games.

Yasmani ACOSTA FERNANDEZ (CHI) won a bronze medal at the 2017 World Championships. He was a gold medalist at the Grand Prix de France Henri Deglane in January.

Eduard POPP (GER) reached the semifinals of the 2016 Olympics in Rio before placing fifth.

Another past world medalist to watch is Minseok KIM (KOR). He was a bronze medalist at the 2018 World Championships.

Alin ALEXUC CIURARIU (ROU) and Elias KUOSMANEN (FIN) have won multiple medals at the European Championships. Alexuc Ciurariu, a 2020 European champion, will be competing in his third Olympics.