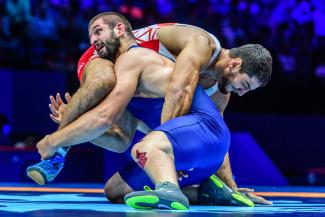 TOKYO, Japan (July 22) -- A pair of under 21-year-old phenoms head into the Tokyo Olympic Games looking to disrupt a heavyweight pecking order that's stood tall since the '14 World Championships.

Taha AKGUL (TUR) and Geno PETRIASHVILI (GEO) head into Tokyo as the betting favorites to vie for 125kg Olympic gold. The pair of dominant big men have claimed every world or Olympic title since the '14 World Championships and every continental gold medal since the '12 European Championships. Collectively, they own an Olympic gold medal, Olympic bronze, five world titles and eight European golds.

But rising 21-year-old stars Amir ZARE (IRI) and Gable STEVESON (USA) will look to keep their red-hot streaks alive and insert themselves into the conversation as the world's best big men.

The American has yet to face off against either heavyweight legend, while Zare scored a stunning 15-11 win over Petriashvili at the Iranian Pro League in late '19. The Iranian trailed the Georgian 11-2 but scored 13 unanswered points and picked up the massive victory, 15-11.

Steveson made his senior-level international debut earlier this year at the Pan-American Championships. He easily won gold, and though the competition level was down significantly, he outscored his opponents 50-0 en route to his first international gold medal.

In addition to Petriashvili and Akgul, Yusup BATIRMURZAEV (KAZ) and Oleksandr KHOTSIANIVSKYI (UKR) also sit in a seeded position.

Batirmurzaev is seeded second. The 25-years-old from Sulak, Dagestan, heads into Tokyo riding six consecutive senior-level podium finishes. He kicked his streak with a '20 Asian gold medal. His success continued into the Matteo Pellicone, where he reached the finals but fell to Amarveer DHESI (CAN). Then, the Russian-turned Kazakh won a ticket to Tokyo for Kazakhstan by claiming gold at the Asian Olympic Qualifier in his home country. He also won bronze medals at the Poland Open Ranking Series event and the Ali Aliyev.

Another guy who can cause a shakeup at 125kg is fourth-seeded Aleksander KHOTSIANIVSKI (URK). Despite being 0-3 against Akgul, the '19 world bronze medalist has beaten Petriashvili. He picked up his victory over the reigning three-time world champion at the '18 International Ukrainian Tournament.

A heavyweight darkhorse to keep an eye on is China's Zhiwei DENG (CHN). The 33-year-old from Qingdao, Shandong Province, captured a silver medal at the 2018 World Championships in Budapest, Hungary and became China's first-ever freestyle world medalist. He followed that up with a bronze-medal finish at the '19 World Championships.

Prior to Deng's world-medal winning performance in '18 World, China had reached the bronze medal match four times and failed to win a bronze in each of those four matches.