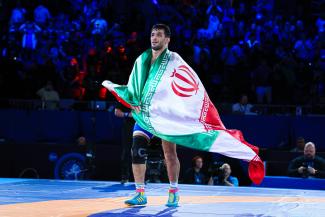 OSLO, Norway (October 3) -- There would be no last-minute comeback this time. Hassan YAZDANI (IRI), so unbeatable against everyone else, could finally walk off the mat a winner over rival David TAYLOR (USA) for the first time in four career clashes.

Yazdani controlled the match from start to finish to notch a solid 6-2 victory over Taylor in the highly anticipated 86kg final as four freestyle titles were decided on the second day of the World Championships in Oslo on Sunday.

The vocal contingent of Iranian fans were also sent into a frenzy when rising star Amir ZARE (IRI) claimed the 125kg title, having earlier seen Iran gain finalists in all four weight classes that got underway Sunday, including Yazdani's cousin Amir YAZDANI (IRI). 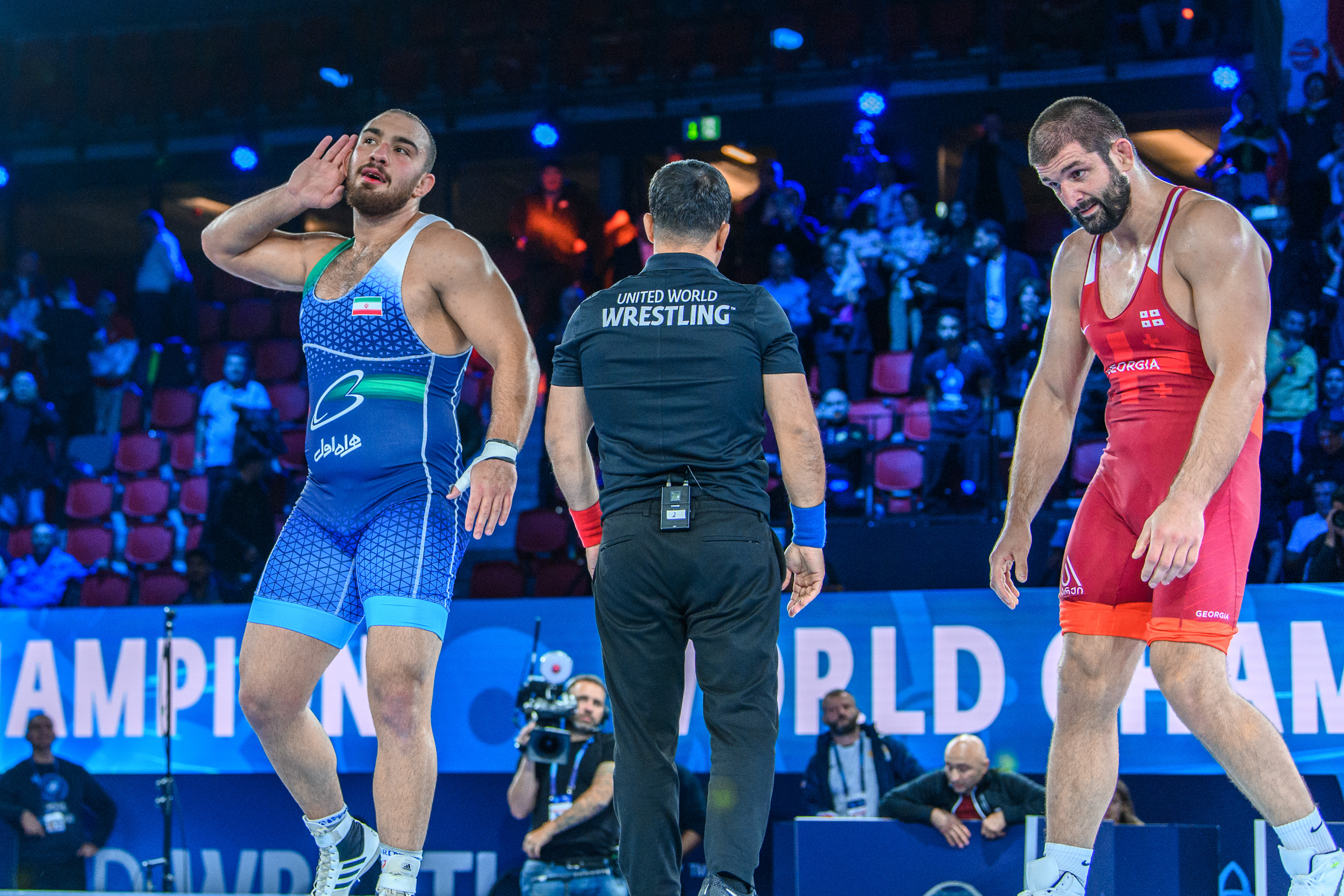 Zare, a 2019 world U23 champion and junior silver medalist, also avenged a loss from Tokyo in beating three-time defending champion Geno PETRIASHVILI (GEO) in the 125kg final, and he did it with an emphatic 9-2 win.

The 20-year-old Zare lost 6-3 to Petriashivili in the semifinals in Tokyo, where the Iranian went on to take the bronze medal. Petriashivili ended up with the silver after losing in the final to Gable STEVESON (USA), who opted not to make the trip to Oslo.

"After winning the bronze medal at the Olympics, I began working on my weakness right after I stepped down from the podium," Zare said.

On Sunday, Petriashvili struck first with a double-leg takedown, but that would be end of his scoring as Zare maintained a solid wall of defense that led to two takedowns off counters as well as three stepouts.

"The final was very hard against Geno," Zare said. "I had analyzed everything for this match and prepared accordingly. And thank God everything went as planned."

Dake, coming off a bronze-medal run at the Tokyo Olympics, picked up his third world title and first at 74kg with a 7-3 victory over Tajmuraz SALKAZANOV (SVK).

"The first two times I was a young buck coming up, this time I faced adversity in Tokyo," Dake said "Put that behind me and it feels nice to be back on top." 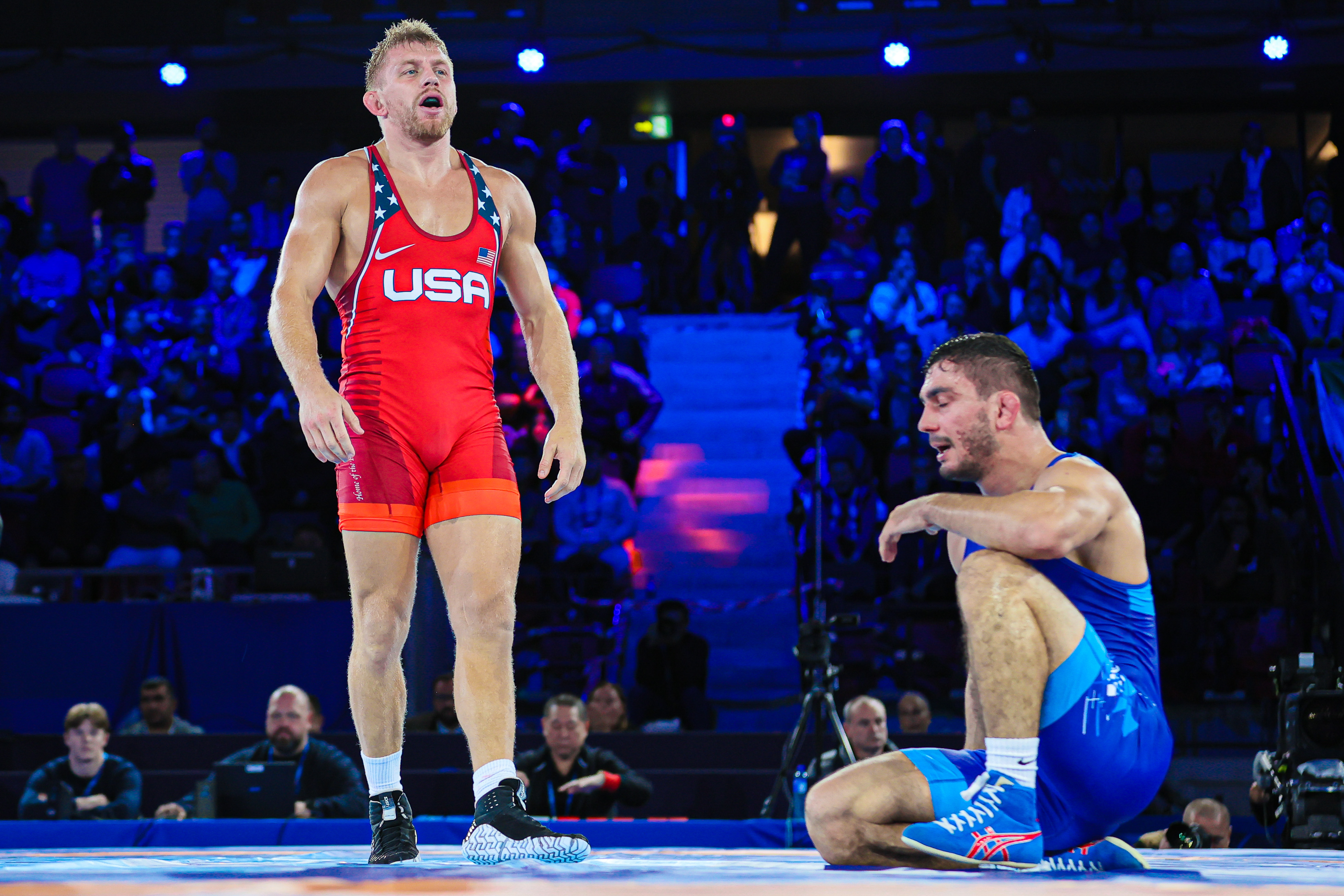 Dake, who won his two previous golds at 79kg in 2018-19, stayed focused after falling behind 2-1 in the second period on a second stepout. The American went ahead with a takedown from a single-leg to a body lock midway through the period, then put the matter to rest with a takedown to a roll.

"There is a lot that goes into this," Dake said. "You guys get to see the glory of it. It is hard. The guys that are here in the tournament and guys back home putting countless hours to get me here.

"I want to thank my coaches, trainers, everybody for getting me here. My wife for managing the kids. I have two little girls and we got another one on the way. Really happy to win and represent my country."

The Russian-born Salkazanov became the fourth world medalist in Slovakian history, although he will rue missing out on becoming its first gold medalist.

At 61kg, Magomedov capped his senior world debut with a workmanlike 4-1 victory over Fix in the final.

"As you can see, I am the world champion, which means my final match went successfully,"Magomedov said. "I've been working hard for that and I am really glad."

Magomedov, this year's European champion and 2018 world junior gold medalist, received two activity clock points, then put the match away with a takedown off a counter against the ever-attacking Fix.

"Honestly, my plan was either to pin the opponent or finish 10-0," Magomedov said. "I kind of tried to pin him, but I couldn't make it, so it is 4-1 and I am satisfied with the victory. It's the World Championships, you never have easy opponents here. I am really glad."

Magomedov, who won a second straight national title in March, was accorded the honor of being named to the Russian federation team without having to go through the trials. The only other wrestler to have such treatment was 97kg superstar Abdulrashid SADULAEV (RWF).

Magomedov, who said he plans to go up to the Olympic weight of 65kg, got the ultimate compliment from his coach after his victory.

"He said that I am a real man," Magomedov said. "If someone calls you a real man, it's really nice. After the victory, I could see in his emotions that he was really happy. It was our first final for today, so Russia already has one gold medal." 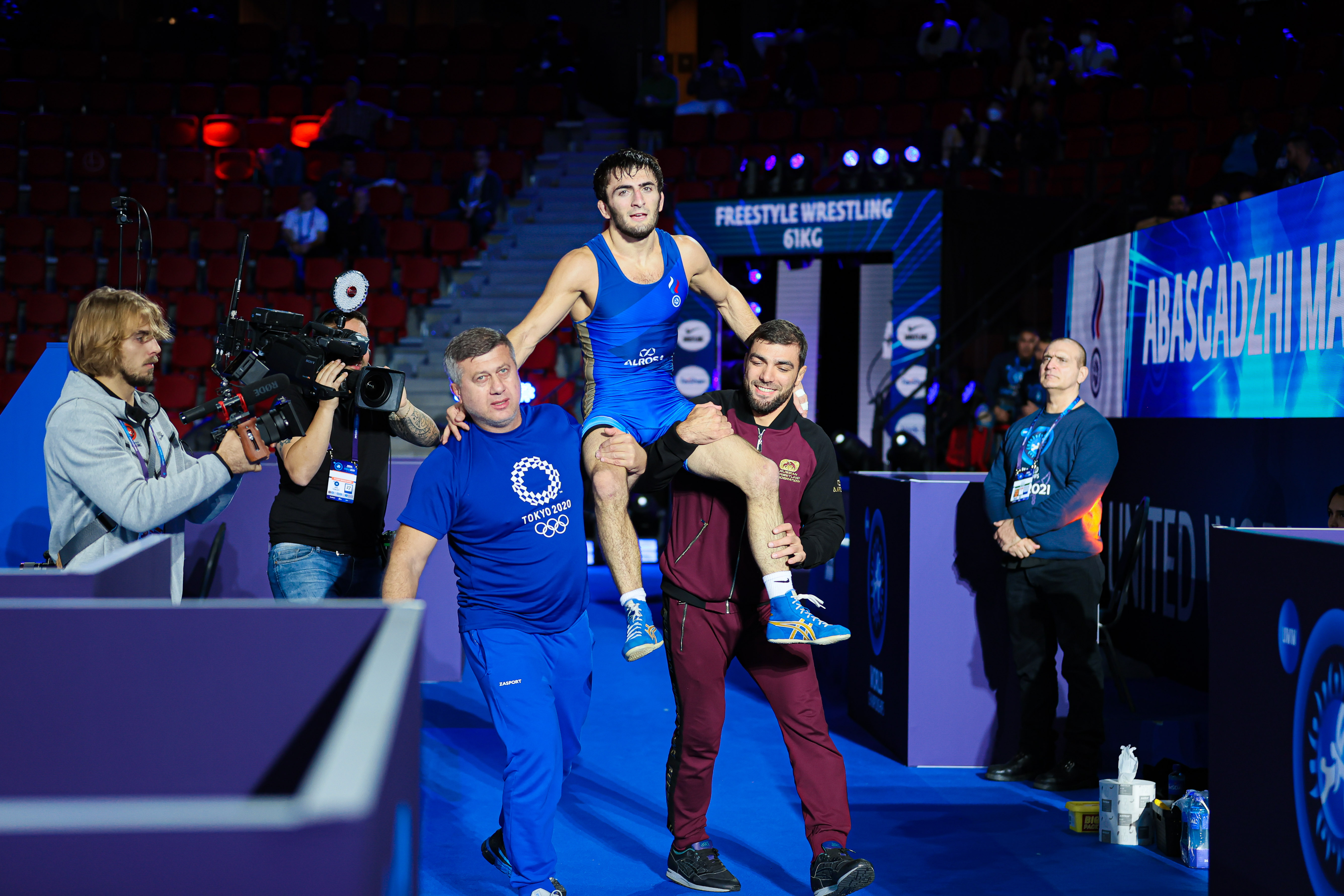 In the bronze-medal matches, Azamat NURYKAU (BLR) was denied a place on the podium yet again when Fazil ERYILMAZ (TUR) gained a late activity clock point for a 2-1 victory at 74kg.

Nurykau, competing in his seventh World Championships, had previously made it to the bronze-medal match in 2014, 2015 and 2017 -- and lost every time. For Eryilmaz, who finished third at the Individual World Cup in 2020, it marks his first world medal on any level.

Timur BIZHOEV (RWF), a 2018 world U23 bronze medalist, rallied from a 1-6 deficit to defeat Avtandil KENTCHADZE (GEO), 8-6, for the other 74kg bronze medal. Kentchadze's younger brother, Nika, will wrestle for a 79kg bronze on Monday.

At 125kg, 2016 Rio Olympic champion Taha AKGUL (TUR) earned his sixth world medal -- he now has two of each color -- when he scored all of his points in the first period in beating two-time world bronze medalist Nick GWIAZDOWSKI (USA), 6-4.

In the other match, 2019 world U23 bronze medalist Lkhagvagerel MUNKHTUR (MGL) scored 4 points with a takedown-lace lock combination in the first period enroute to a 5-3 victory over Asian champion Oleg BOLTIN (KAZ).

The other 86kg bronze went to 2019 world U23 silver medalist and two-time world junior medalist Abubakr ABARAKOV (AZE), who went on a 8-point tear in the second period then held on to defeat Boris MAKOEV (SVK), 9-5.

That Dahiya made it to the bronze-medal match was a small miracle in itself. In the repechage, he was getting hammered 0-8 by Georgi VANGELOV (BUL) when he determinedly put his opponent on his back and scored a fall at 2:36.

Toshihiro HASEGAWA (JPN), the 2018 world U23 champion at 57kg, put on a takedown clinic and gained a pair of unorthodox exposures in a 12-1 technical fall over Tuvshintulga TUMENBILEG (MGL) for the other 61kg bronze.

On Monday, superstar Abdulrashid SADULAEV (RWF) takes the mat as the final two freestyle weight classes of 70kg and 97kg, as well as the women's 55kg and 62kg divisions. 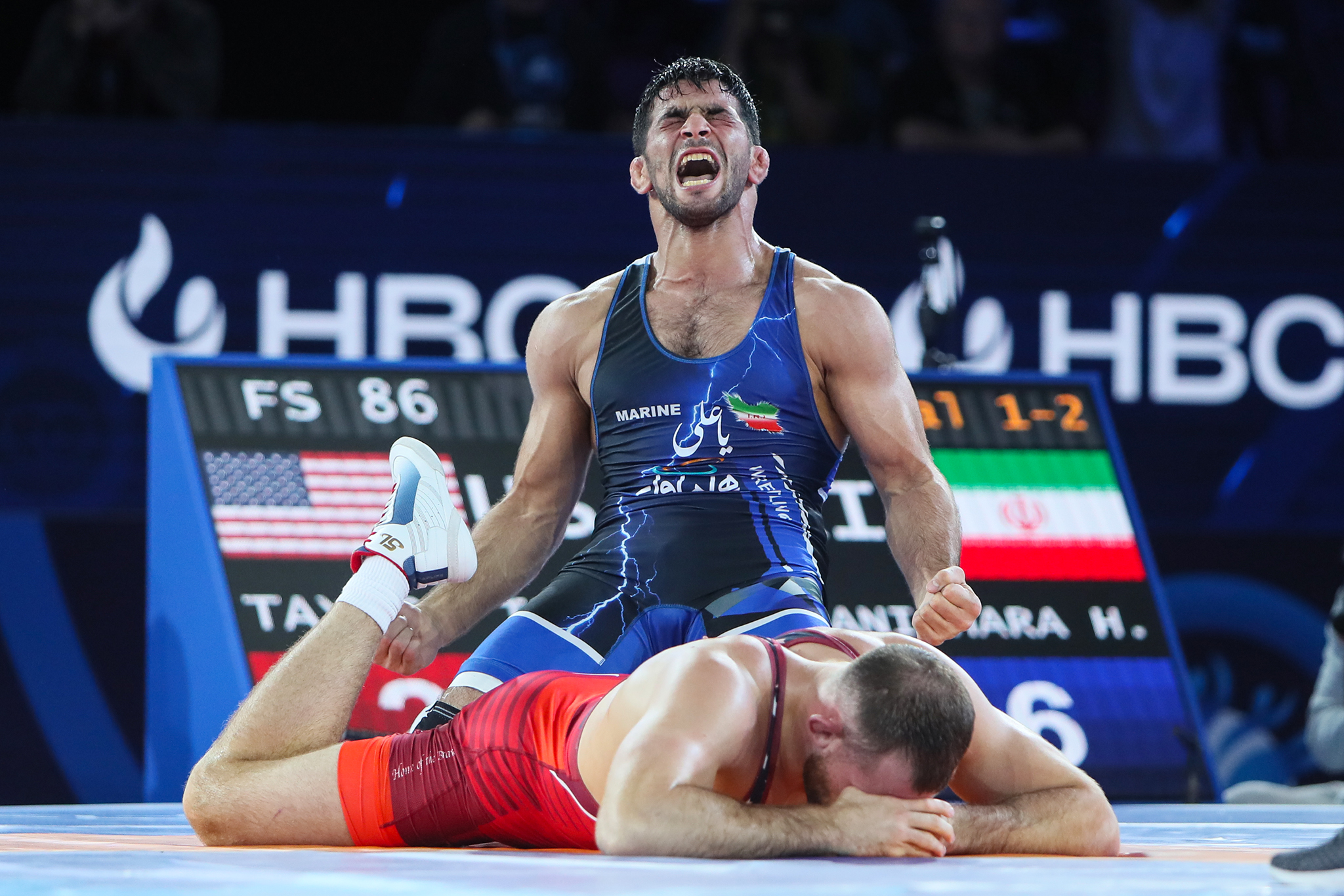