#WrestleOslo: Vlasov Back to Familiar Territory by Reaching 77kg Final 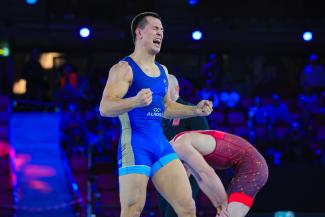 OSLO, Norway (October 7) -- Roman VLASOV (RWF) let out a loud cry after winning his semifinal bout. Three years after he last became a world champion, the two-time Olympic champion was once again back in familiar territory as he reached the final of 77kg weight class at the senior World Championships in Oslo, Norway.

Vlasov lost in the pre-quarterfinals of the 2019 World Championships and then failed to earn a spot on the Russian Wrestling Federation team for the Tokyo Olympics. But soon after the Olympics, he announced that he wants to win a third Olympic gold and will run for the Paris cycle.

Leading a young Russian Wrestling Federation in Oslo, Vlasov destroyed the competition in Oslo as he began with a 11-0 crushing of Tamerlan SHADUKAYEV (KAZ) in the opening bout, won 10-3 against Dmytro PYSHKOV (UKR) and then manhandled World bronze medalist Mohammadali GERAEI (IRI) 10-1 in the quarterfinals.

A tough task in the semifinals awaited him as a young Tamas LEVAI (HUN) had made it to the semifinals from the other side. Levai had an indirect hand in keeping Vlasov out of the Tokyo team by beating him at the Poland Open ranking series event. That event was being treated as the selection trial by the Russian Wrestling Federation and Vlasov lost in the semifinal against Levai.

But he avenged that loss Thursday as he beat Levai 7-0 and did not let the Hungarian take control of the bout. One of the strategies that Levai had in Warsaw was to not let Vlasov open up for attacks. But Vlasov did not let Levai settle down Thursday and began early with scoring. All seven points were scored in the first period.

Levai's loss also ended the tournament for world champion Viktor NEMES (SRB) as he had suffered a 1-1 loss to the Hungary wrestler. The two points were awarded for passivity but Levai was awarded in the second period, giving him the criteria of last point scored.

Vlasov will now face Sanan SULEYMANOV (AZE) in the final as he defeated Tsimur BERDYIEU (BLR) 5-4 in the other semifinal. After being awarded a point for passivity and then a four-point throw, Suleymanov had to concede a four-point throw but managed to survive any further attacks.

At 82kg, Tokyo Olympic bronze medalist Rafiq HUSEYNOV (AZE) had to overcome a world medalist and an European medalist to reach his second straight Worlds final. In the semifinal, he defeated Adlan AKIEV (RWF), the 2021 European champion, 2-1 to advance to the final. He was awarded a point for passivity but he failed to benefit from the par terre position. But he added a point for pushout to make it 2-0. A point was awarded against him for passivity but Akiev failed to do much after that.

Earlier, he rallied from 6-0 down to win 7-6 against Alex KESSIDIS (SWE). He went for with his arms around Kessidis' waist but the Sweden wrestler used the momentum to throw Huseynov for four. He then added a gut wrench to be within two points of victory.

But Huseynov got unreal with a throw and point for passivity. A takedown made it 7-6 and he stuck to that score until the end of the bout.

He will now face Burhan AKBUDAK (TUR) who managed to beat Pejman POSHTAM (IRI) 5-2. The match was decided in the first period when Akbudak scored a four point throw and Poshtam could never recover from that.

Japan had a finalist Thursday after Ken MATSUI (JPN) pinned former world champion Eldaniz AZIZLI (AZE). Matsui was toying around with Azizli who was looking for his second world title. Matsui went for an underhook and Azizli made it very easy to pin once he was on his hips. Matsui will now have Individual World Cup winner Emin SEFERSHAEV (RWF) in the final. He defeated Norayr HAKHOYAN (ARM) 3-2.

In the fourth category -- 72kg -- Russian Wrestling Federation had another finalist as Sergei KUTUZOV (RWF) blasted Cengiz ARSLAN (TUR) 10-0 in the semifinal and advanced. Malkhas AMOYAN (ARM) will be his opponent in the final as he denied another Iran wrestler, Mohammad MOKHTARI (IRI), a spot in the final two. Amoyan beat Mokhtari 10-6

Greco-Roman will continue on day seven of the World Championships in Oslo, Norway.

OSLO, Norway (November 26) --- Hassan “The Greatest” YAZDANI (IRI) headed into the Oslo World Championships with revenge on his mind. He lost to career rival David TAYLOR (USA) in three consecutive matches – including once in August via a last-second takedown in the Tokyo Olympic finals.

Yazdani turned the tides in Oslo on a cold October night and exacted revenge on Taylor and claimed his third world title.

United World Wrestling sat down with Yazdani after his epic win to talk about the losses that drove him to become a three-time world champion, what was different about his Iranian team in Oslo and what’s motivating him to chase a second Olympic gold medal.

The Epic Oslo Matchup:
Yazdani controlled the 86kg world finals match from start to finish to notch a solid 6-2 victory over Taylor in the highly anticipated 86kg final at the Oslo World Championships.

The vocal contingent of Iranian fans were sent into a frenzy when rising star Amir ZARE (IRI) claimed the 125kg title, having earlier seen Iran gain finalists in all four weight classes that got underway Sunday, including Yazdani's cousin Amir YAZDANI (IRI).