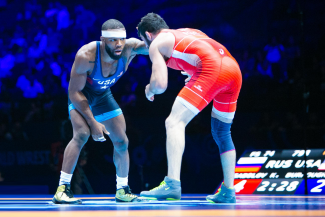 Cabolov and Burroughs are entered into the stacked 79kg bracket at next week’s Yasar Dogu and could potentially clash next Sunday, February 27, for Ranking Series gold.

Although the stakes in Istanbul won’t be as high as they were in the ’17 Paris world finals, the tensions are guaranteed to remain on the same level. The two have a clear respect for each other off the mat, but if that final in France was any indication as to what another match could look like, wrestling fans are in for a treat next week.

During their fiercely-contested last meeting, there were seven lead changes, six combined takedowns and a referee stoppage after the match started to resemble a heavyweight boxing fight.

Burroughs surrendered the first takedown of the match and trailed 2-0 early as his then-Russian opponent stopped a double leg from open space, scoring off an elbow pass to a single leg. Burroughs leveled the match two apiece with a counter offense freight train double leg, taking the lead on criteria a minute into the bout.

Burroughs handed the lead back to Cabolov 28 seconds later after he tried toeing the out of bounds to stop a double leg attempt, but the 2014 world champion circled the American legend to his right and grabbed a second takedown.

Trailing 4-2, Burroughs caught Cabolov on his belly after a double leg from space and transitioned from a go behind to a leg lace and led 6-4.

The Russian Wrestling Federation didn’t agree with the two-and-two, saying Cabolov’s knee never touched while Burroughs was behind and requested a challenge. They won the challenge and cut Burroughs’ lead to 4-4 heading into the closing frame.

The second period is where their hands became heavy and things got chippy between the pair of former world champs. “Now they’re in each other faces. This is turning not only into a wrestling match but a war,” said Bryan Hazard, who was on the call for the 74kg finals match.

After a stern warning from the ref, action resumed. Burroughs skated the edge of the mat and halted a Cabolov shot and extended his lead to 5-4 with a step out. But that lead was short-lived, as the gold-shoe-wearing American conceded a single leg and trailed 6-5 with 90 ticks left.

Both have moved a weight class up since then and are scheduled to compete at 79kg at the first Ranking Series event of the season, Yasar Dogu, on Sunday, February 27.

For news, recaps, highlights, interviews and much more from Istanbul, visit www.uww.org or follow United World Wrestling on all social media channels.