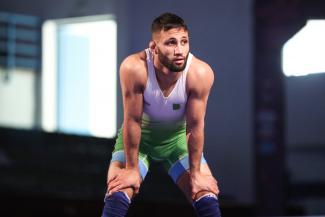 But there are only two Tokyo Olympic tickets up for grabs at each weight class. Wrestlers must win their semifinal matches to earn an Olympic license for their respective National Olympic Committees.

Returning champ Abdelhak KHERBACHE (ALG) heads into Tunisia as one of the favorites to earn an Algerian berth to the Olympic Games. He hasn’t lost on African soil since he finished in third place at the ’18 African Championships. Since that ’18 loss, Kherbache has claimed golds at the ’19 and ’20 African Championships and the ’19 All African Games.

Last year, the Algerian picked up a pair of wins over wrestlers who are entered into the Africa and Oceania Olympic Qualifier field on his way to winning the 57kg title. He defeated Diamantino IUNA FAFE (GBS) and Gamal MOHAMED (EGY), who finished with silver and bronze, respectively, en route to a second continental title.

Iuna Fafe, last year’s runner-up, is returning to the mat for the first time since finishing in the top-ten at December’s Individual World Cup. He defeated Minir REDJEPI (MKD) and Niklas STECHELE (GER) but fell to eventual bronze medalist Rahman AMOUZADKHALILI (IRI) and ended his Belgrade run in ninth place.

Tau is looking to become the first wrestler from the Republic of South Africa to punch his nation’s ticket to the Olympic Games since Heinrich BARNES (RSA) qualified for the ’12 London Olympic Games.

Mohamed will have to have a career-best day if he has hopes of earning Egypt a 57kg Tokyo berth. He’s competed on the continental level three times and medaled in each of those appearances -- but he’s failed to reach the finals. He’s earned bronze medals at the  ’19 and ’20 African Championships and the ’19 All African Championships.

Another guy to keep an eye on is Rio Olympian, Chakir ANSARI( MAR). He’s the most experienced guy in the field. Ansari has 33 senior-level competitions under his best – including three world championship appearances.

Wrestling at the Africa and Oceania Olympic Qualifier kicks off Friday (April 2-4) and can be followed live on www.uww.org.