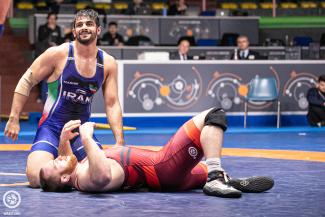 Wrestlers have to reach the finals in Almaty to book their nation's tickets to the Tokyo Olympic Games.

Mohammadian will take the mat for the first time since his magical run to the ’20 Matteo Pellicone gold medal. During that run in Rome, the former Asian champion outscored his five opponents 41-0, while tallying victories over an Olympic champion, a U23 world champion, a world bronze medalist and a world fifth-place finisher.

Ibragimov is a Rio Olympic bronze medalist and two-time Asian champion. He's looking to punch his ticket to a second consecutive Olympic Games. Ibragimov fell to Kyle SNYDER (USA) in the quarterfinals at the '19 World Championships and barely missed out on an Olympic berth with a seventh-place finish. Most recently, the 36-year-old struggled at the International Ukrainian Tournament, but before that, he was riding an 11-tournament streak where he finished top ten -- including six podium finishes.

Kadian, last year's Asian runner-up, is also entered at 97kg. The three-time Asian medalist is looking to become the fourth Indian freestyle wrestler to qualify for the Olympic Games. India has also qualified at 57kg, 65kg and 86kg.

Ulziisaikhan rounds out the list of Olympic, world, or continental medalists who are entered at 97kg.

The last competition where Ulziisaikhan laced up his boots was the '19 World Championships. In Nur-Sultan, the '19 Asian runner-up won his opening match against Magomed MUSAEV (KGZ) but fell to eventual fifth-place finisher Alisher YERGALI (KAZ) in the quarterfinals and fell to a 15th-place finish.

Wrestling at the Asian Olympic Qualifiers kicks off on April 9-11 in Almaty, Kazakhstan, but freestyle action takes center stage on Sunday morning. You can follow all the action live on www.uww.org. 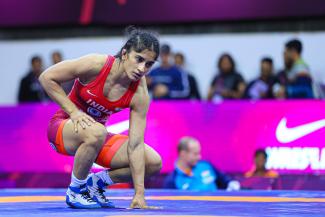 Women's wrestling will see 53kg, 57kg, 62kg, 65kg, and 72kg in action at the Senior Asian Championships in Almaty

1310 hrs: We are rolling into the semifinals shortly after the qualifications

1255 hrs: A two-minute 37 second victory by technical superiority for VINESH (IND) at 53kg. She is looking very good for her first Asian Championships title

1230 hrs: Aisuluu TYNYBEKOVA (KGZ) is out there to dominate! She rolls through with a 12-2 tech dec over Irina KUZNETSOVA (KAZ) at 62kg

1200 hrs: The Indian wrestlers are here with a goal. All of the four in action (SONAM at 62kg is injured), have won their bouts.

1140 hrs: Vinesh, Anshu, Tynybekova and KUZNETSOVA all start on a winning note on Mat B

1130 hrs: Welcome to day four of the Asian Championships from Almaty. Lot of sun out there to make up for the early cold days.