With World Cup history on mind, Ukraine arrives in US 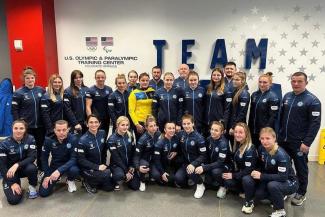 The wrestlers achieved this with little to no training before the Euros and with no training base for the rest of the year. A few trained in Budapest while another group was in Warsaw. If anyone was relatively lucky, they could train in western Ukraine.

So it was a commendable gesture from USA Wrestling to invite the Ukraine team to the Olympic training center in Colorado Springs two weeks before the December 10-11 World Cup despite being two of the strongest teams out there.

Throughout the year, United World Wrestling, along with Olympic Solidarity, the National Olympic Committee of Ukraine and the USOPC, provided technical assistance to the Ukraine Wrestling Federation for the participation of the Ukraine women’s team in major UWW events.

The World Cup was also part of the same plan the UWW Development Department and local organizing committees provided technical support for Ukraine.

“We remain committed and devoted to supporting all our national federations around the world," UWW President Nenad LALOVIC said. "Despite the current political problems, we remain one family through wrestling.”

Ukraine has been preparing for the World Cup with a full-strength team and will be heading to Iowa from Colorado for the competition.

"The American team welcomed us very kindly," Oksana LIVACH (UKR) said. "We are in the Olympic Center in Colorado, there are very good conditions for training and we enjoy spending time here."

Amidst all the difficulties the team has faced, the wrestlers have held together, switching between wrestling and coaching during various tournaments. The World Cup will see them rise to the challenge once again when Ukraine takes on Japan and Mongolia in the group stages of the tournament.

After the World Championships, the wrestlers did participate in the U23 Worlds in Spain before arriving in the United States last week. The 26-member delegation was welcomed with open arms and are provided with the best facilities and training.

"There are many sparring sessions, the training is very interesting, you can learn something new, exchange experience," Oksana said.

The World Cup will not only be a way to show the strength of the Ukraine team, it will also mark the return of Ukraine's two biggest stars. Former world champion and three-time Olympian Yulia TKACH (UKR) is entered for the tournament, her first in almost three years.

Another wrestler who will be returning in over a year is Tokyo bronze medalist Iryna KOLIADENKO (UKR) at 62kg. She has skipped all tournaments in between.

Both Tkach and Koliadenko will be leaders of the team which also comprises Oksana LIVACH (UKR), Alina HRUSHYNA (UKR), Alla BELINSKA (UKR) and other youngsters.

At the World Cup, Ukraine will open its campaign against Mongolia on Saturday afternoon and will fancy its chances of winning the dual and setting up a virtual final against Japan. As the best country in women's wrestling is sending a depleted squad with no senior world medalist, Ukraine will look to pull off an upset win if it wants to reach the final from Group A.

With the team already acclimatized to the US and the return of its senior wrestlers, Ukraine winning will not be a surprise.

"Japan is the strongest team in the world in women's wrestling," Tkach said. "I think the young team will also be strong and it will be interesting for us to compete with them. Our team is also quite young and strong.

"We believe in our team. We will see a good fight on the mat and it will show who wins."

Apart from the chance to win the World Cup, the team is motivated and united by the tough times everyone faced this year. The emotions ran high at the European Championships when it crowned three champions in Budapest despite the uncertainty of the lives back home. A big relief came when it qualified for the World Cup finishing fifth in Belgrade with three medals.

"This year was really very difficult for our team. Our girls performed really well," Livach said. "I think this season will remain in history and in our memory. The World Cup is the final point for this year and we want to end it on a good note. All the teams are very strong and everyone can and has a chance to win, just like our team."

The World Cup win will make the year even more historic for the country as it has never finished on the podium before at the competition. But that can change in Coralville.

"Our team has many young wrestlers who have the opportunity to prove themselves," Livach said. "Expect a worthy fight."