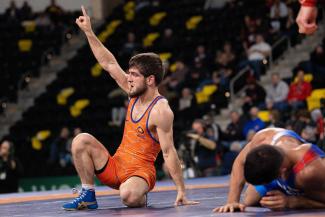 14:30: All over in this dual! The All-World team beats Georgia 8-2 to capture the bronze at this World Cup. Batyrbek TSAKULOV (UWW) won his 97kg bout 7-7 while Oleksandr KHOTSIANIVSKYI (UWW) was injured.

14:15: Osman NURMAGOMEDOV (UWW) scores after being put on the clock against Mirani MAISURADZE (GEO). Both are bronze medalists from the World Championships. Nurmagomedov leads the bout 3-0 and it will end that way.

14:00: Azamat DAULETBEKOV (UWW) led 2-1, all three points for passivity, and scores a takedown at the end to win 4-1 against Sandro AMINASHVILI (GEO) and wins the bronze for the All-World team. This was the sixth win for the team.

13:45: 15th straight loss for Georgia as Tajmuraz SALKAZANOV (UWW) beats Giorgi SULAVA (GEO) 10-0 at 74kg. Vladimeri GAMKRELIDZE (GEO) vs Arsalan BUDAZHAPOV (UWW) at 79kg now. A good start for Gamkrelidze as he slowly builds up his lead. A takedown and two turns as he leads 8-2. A takedown and gut to win 12-2. He ends the drought for Georgia.

13:30: Giorgi ELBAKIDZE (GEO) was so close to beating Ernazar AKMATALIEV (UWW). He scored a takedown in the second period to make it 4-3 and kept shooting to get that point but Akmataliev with very solid defense to win at 70kg.

12:55: Zelimkhan ABAKAROV (UWW) and Beka BUJIASHVILI (GEO) at 57kg. Abakarov gets a takedown after giving up a passivity point. He goes to an easy 4-1 win. At 61kg, Teimuraz VANISHVILI (GEO) is injured and Georgi VANGELOV (UWW) will get a walkover.

Now it's time for the men's bronze medal bouts between Georgia and All-World team.

12:50: Solin PIEARCY (USA) and Dymond GUILFORD (USA) won their respective bouts but Mongolia claims the bronze medal at the World Cup by winning this dual 7-3. What a weekend for them.

12:15: Orkhon PUREVDORJ (MGL) and Mallory VELTE (USA) go back and forth with takedowns and Purevdorj holds the criteria 6-6 and adds one more at the end to make it 9-6. That is the sixth win for Mongolia and it is the bronze medal for Mongolia.

12:05: Tserenchimed SUKHEE (MGL) with two unorthodox takedowns against Kayla MIRACLE (USA) to lead 8-5. Sukhee caught Miracle in an arm-to-foot bow position. Miracle seems very disturbed by the early injury on her hand. But Sukhee with lace and finishes the bout 16-5.

12:00: Davaachimeg ERKHEMBAYAR (MGL) is up 2-0 as Lexie BASHAM (USA) was called passive twice. Erkhembayar with a headlock for four but Basham is also awarded two. She does it again and leads 11-2. A takedown to win 13-2. Mongolia leads 4-1 now.

11:45: That was a crazy bout! Erdenesuvd BAT ERDENE (MGL) scored a suplex for four over Alexandra HEDRICK (USA) but the American kept the pressure and scored two takedowns. Trailing 4-4 on criteria and 31 seconds remaining, she lifts Bat Erdene and gets the stepout with less than one second remaining. Mongolia challenges but the stepout is in time. The USA win its first bout. Mongolia still leads 3-1.

11:25: Bolortuya BAT OCHIR (MGL) gives up a stepout against Jenna BURKERT (USA) but then gets a takedown and lace to make it 4-1. Burkert gets her takedown to close the gap to 4-3 and then shoots for the legs and almost got it but Bat Ochir with exposure to win 6-4. The USA challenges the call and it is 6-6 for Burkert but the jury says the challenge lost which means Bat Ochir will win 7-6

11:10: At 50kg, Erin GLOSTON (USA) will take on world silver medalist Otgonjargal DOLGORJAV (MGL). Gloston puts up a fight but Dolgorjav wins via fall. The Otgonjargal GANBAATAR (MGL) vs Felicity TAYLOR (USA) bout at 53kg goes the distance but Taylor can't bring the USA back in this. Ganbaatar with a strong game to win 12-1.

10:50: Welcome to day two of the World Cup. It was non-stop action on Saturday and expect nothing less today as the USA takes on Mongolia for the third place in women's before the All-World team takes the mat against Georgia for the same in men's.