First-day team rankings leader, Georgia, also advanced a pair of wrestlers to the gold medal round at Bagcilar Sports Complex to virtually sew up the team championship.

Abbasov, who won a bronze medal at the European under-23 meet in March, rolled up a pair of technical falls on his way to the final at 84kg, where he will meet Gadzhimurad DZHALALOV (RUS), a bronze medal winner at the 2014 European juniors. 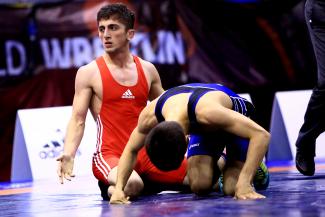 Mammadov, meanwhile, won three of his four bouts at 55kg inside of regulation time and will face 2013 European junior silver medalist Irakli SHAVADZE (GEO) for the gold medal.

Junior world silver medalist Ruhin MIKHAILOV (AZE), however, did not fare as well as his golden teammates, despite a quarterfinal win, 2-1, over 2013 junior world champion Karen ASLANYAN (ARM).

Mikhailov then fell in the 66kg semifinals, 3-1, to Cengiz ARSLAN (TUR) on a late takedown and tumbled into the bronze medal finals.  Arslan, meanwhile, will face Otto LOSONCZI (HUN) for the gold medal. 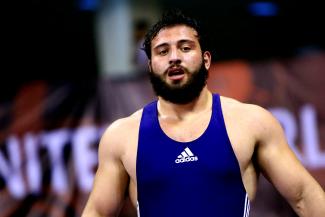 In addition to Shavadze, Georgia will send two-time cadet world champion Zviadi PATARIDZE (GEO) to the gold medal finals. Pataridze, making his first appearance at the junior level, will square off Gadzhi MAGOMEDOV (RUS) in the 120kg.

Championship wrestling concludes Sunday evening with the gold and bronze medal finals at 55, 66, 84 and 120kg in Greco-Roman.