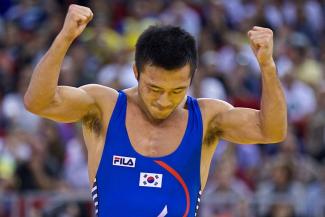 INCHEON, Korea (October 1) – World champions RYU Han-Soo (KOR) and KIM Hyeon-Woo (KOR) will add to a glittering close to the Greco-Roman events Wednesday as the curtain comes down on the Asian Games wrestling competition.

Ryu and Kim will be seeking their first gold medals at the Asian Games when they take to the mats at Dowon Gymnasium for competition in the final four weight categories of Greco-Roman.

Ryu, only a bronze medal winner at the Asian championships in April, will face a tough field, which includes world bronze medalists Elmurat TASMURADOV (UZB) and Afshin BYABANGARD (IRI), at 66kg.

Kim, meanwhile, will try to add “Asian Games gold medalist” to his growing list of titles at 75kg. Most recently, Kim added a third Asian championship title from the meet in Almaty, Kazakhstan.

At 130kg, Nurmakhan TINALIEV (KAZ) will seek a repeat of his gold medal performance at the Guangzhou 2010 Asian Games, while the competition at 85kg is wide open with Asia champion Nursultan TURSYNOV (KAZ) seeking to reprise his victory in Almaty.

The explosive Elmurat TASMURADOV (UZB), up from 59kg where he is Asia champion and world bronze medalist, could very likely be waiting in the semifinals.

In the upper half of the bracket 2010 world silver medalist Ryutaro MATSUMOTO (JPN), 2013 bronze medalist Sandeep YADAV (IND) and Asian championships runner-up Khusrav OBLOBERDIEV (TJK) battle for one berth in the semifinals.

World and Olympic Games champion KIM Hyeon-Woo (KOR) opens in the quarterfinals at the top of the bracket and could face YANG Bin (CHN), a bronze medal winner at the Asian meet in April, for a berth in the finals.

Asian silver medalist Takehiro KANAKUBO (JPN) is in the lower half of the bracket and could face junior world runner-up Payam BOUYERI PAYANI (IRI) in the semifinals.

The top six place-winners from the Asian championships in April are entered here with champion Nursultan TURSYNOV (KAZ) and runner-up Rustam ASSAKALOV (UZB) likely to meet in the quarterfinals – with the likelihood the winner will face bronze medalist Manoj KUMAR (IND).

Bronze medalist Mojtaba KARIMFAR (IRI) sits atop the lower half of the bracket, while fifth-place finishers Azat BEISHEBEKOV (KGZ) and Kiyas ESENOV (TKM) square off in the preliminaries with an eye on the semifinals.

Guangzhou 2010 Asian Games champion Nurmakhan TINALIEV (KAZ) will have to wade through a loaded lower-half of the bracket for a chance to defend his title.

In the upper-half of the bracket, Almaty bronze medalist KIM Yong-Min (KOR) appears poised to give Korean wrestling fans another hero to cheer for in the gold medal final Wednesday evening, although 2011 Asian runner-up MENG Qiang (CHN) would like his say in the semifinals first.