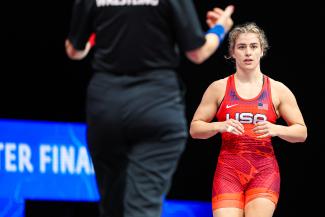 BELGRADE, Serbia (September 14) -- An all women's wrestling day at the World Championships in Belgrade. The final four weight classes will be in action with world champion Helen MAROULIS (USA) taking the mat at 57kg. The 68kg is also guaranteed fireworks.

The semifinals for the evening session are set

13:02: Zhala ALIYEVA (AZE) and Esther KOLAWOLE (NGR) going back and forth on Mat C. The scrambles have resulted in a 9-7 lead for Kolawole. Challenge from Kolawole against a four-point move. She loses the challenge. They trade four-pointers with Kolawale leading 13-12. A go behind with just 8 seconds remaining as Aliyeva wins 14-13

13:01: Asian bronze medalist Davaachimeg ERKHEMBAYAR (MGL) clinches a 4-0 victory with a 2-point takedown to the back in defeating Laylokhon SOBIROVA (UZB) to make the 57kg semifinals.

12:57: Helen MAROULIS (USA), pursuing a fourth career world gold, advances to the 57kg semifinals Anhelina LYSAK (POL) with a 10-0 technical fall. Maroulis scores four takedowns, capping the final one with a lack lock roll to end the match at 3:22.

12:55: Tsugumi SAKURAI (JPN) and Alina HRUSHYNA (UKR) in the 57kg quarterfinals with the Ukraine wrestler leading 2-0 at the break. Excellent defense from Hrushyna so far but Sakurai gets a takedown. She gets on the leg again but Hrushyna is trying to expose her. No points. A 2-2 win for Sakurai as she joins her Ikuei University teammates Ami ISHII (JPN) and Sakura MOTOKI (JPN) in the semifinals for the evening session.

12:50: Taymara MENSAH STOCK faces a familiar opponent in Feng ZHOU (CHN) in the 68kg quarterfinals on Mat D. She was looking for the fall but Zhou manages to come out of it. She leads 6-0. No comebacks from Zhou this time as Mensah wins 10-0

12:48: Big 68kg quarterfinal as Irina RINGACI (MDA) is up against Delgermaa ENKHSAIKHAN (MGL). Both wrestlers get four points but it's Ringaci leading 7-4 after a takedown. In the second period, Ringaci hits a five before winning the match 14-4

12:46: Ami ISHII (JPN) fights off her back and comes back to score a fall over former world champion Linda MORAIS (CAN) and advance to the 68kg semifinals. Morais uses a barrel roll to put Ishii onto her back, then adds exposure for a 6-2 lead. Ishii shoots in on a double, and Morais uses a counter lift for 2 more. But Ishii keeps the legs, charges ahead and uses a half-nelson to put Morais directly to her back. The fall comes at 2:38.

12:40: Defending world champion Masako FURUICHI (JPN) gives up a takedown against Kendra DACHER (FRA) but answers with a takedown and lace to lead 4-2 at the break. A double from Dacher in the second period to lead 4-4. Furuichi struggling with her defense here. A double leg with 20 seconds remaining and she gets four while looking for the pin. Time runs out but she wins 8-4 at 72kg.

12:36: Alexandra ANGHEL (ROU) makes the semifinals for the first time in her third appearance at senior worlds with an 11-0 technical fall at 72kg over Shauna KUEBECK (CAN).

12:34: Zhamila BAKBERGENOVA (KAZ), the silver medalist at 72kg a year ago in Oslo, simply overpowers  Svetlana OKNAZAROVA (UZB) to make the semifinals with a 10-0 technical fall at 2:50.

12:27: European silver medalist Jowita WRZESIEN (POL) scores a takedown and exposure in the final minute to rally into the 57kg semifinals with a 5-3 victory over Mansi AHLAWAT (IND).

12:22: On Mat D, Anastasia NICHITA (MDA) and Qi ZHANG (CHN) are involved in a battle on Mat D. Nichita leads 4-2 at the break. Zhang shoots for the leg but is defended by Nichita. Zhange tries to defend against an attack by Nichita but fails. Nichita with another single leg and she is now looking for the fall and it's confirmed.

12:21: Grace BULLEN (NOR), looking for her first world medal in her sixth appearance, gets one step closer by capping a 12-0 technical fall in the 59kg quarterfinals over Erdenesuvd BAT ERDENE (MGL) with a spectacular 5-point throw.

12:15: U23 world champion Alina HRUSHYNA (UKR) with a fall over Yongxin FENG (CHN) and making her way to the 57kg quarterfinals.

12:11: 2021 world U23 bronze medalist Esther KOLAWOLE, trailing 2-2 on criteria, scores a stepout with :28 left against European bronze medalist Sandra PARUSZEWSKI (GER) to book a place in the 57kg quarterfinals.

12:03: 55kg world champion Tsugumi SAKURAI (JPN) and Olympic bronze medalist Evelina NIKOLOVA (BUL) wrestling on Mat C at 57kg. 1-0 lead for Sakurai at the break for a passivity. A takedown for Sakurai to start the second period, extending her lead to 3-0. Another takedown for her and it's 5-0. Nikolova is in danger of a pin but she lets go of the hold to give up two. 7-0 for Sakurai with one minute remaining. A big four confirmed for Sakurai as she wins 11-0 but Bulgaria challenges the call. Challenge lost and Nikolova will wait if Sakurai can reach the final

11:56: Olympic champion Taymara MENSAH STOCK (USA) takes the lead against Alla BELINSKA (UKR) with a takedown. She went for another but looks like Bellinska has injured her shoulder. After some medical attention, she will continue but Mensah has the par terre advantage. A fall in the second period for Mensah.

11:54: Two-time European champion Irina RINGACI (MDA), yet another world champion in the stacked 68kg field, rolls to a 10-0 technical fall over Noemi SZABADOS (HUN) to advance to the quarterfinals. Ringaci won the 65kg title in Oslo last year.

11:51: Feng ZHOU (CHN) on Mat C against Ambar GARNICA (MEX) and she takes a 3-0 lead with a takedown and an inactivity point. Garnica on the shot and tries to expose Zhou but exceptional defense from the China wrestler. Zhou gives up two but scores a reversal before hitting a four to lead 8-2. But she hangs on for a 10-4 win.

11:48: Ami ISHII (JPN) sets up an intriguing quarterfinal clash at 68kg with Linda MORAIS (CAN) when the Japanese collegian chalks up a 3-0 win over European silver medalist Pauline LECARPENTIER (FRA).

11:47: Defending champion Helen MAROULIS (USA) needs less than 20 seconds to score a fall over Emma TISSINA (KAZ) and advance to the quarterfinals at 57kg.

11:34: In a clash of current and former world champions, 2019 titlist Linda MORAIS (CAN) assures that Meerim ZHUMANAZAROVA (KGZ) will not be repeating her title run at 68kg in a nail-biter on Mat A. Morais, trailing 3-0 in the second period, goes ahead 4-3 with a takedown and exposure. When Zhumanazarova gets in on a single, Morais executes a lift for exposure for 2, but the Kyzgyz wrestler reverses her to her back to cut the lead to 6-5 with :20 left. Morais then resists a vicious gut wrench attempt to secure the win.

11:30:  Sarita MOR (IND), a 2021 world bronze medalist at 59kg, wins her opening match at 57kg, scoring the decisive takedown midway through the second period for a 4-2 win over world U23 bronze medalist Hannah TAYLOR (CAN).

11:30: Alla BELINSKA (UKR) and Asian champion Madina BAKBERGENOVA (KAZ) have been involved in a very close bout. The Kazakhstan wrestler was cautioned twice for grabbing the fingers before Belinska was warned for negative wrestling. But she gets a takedown to lead 5-1. Bakbergenova gets on the leg but Belinska is cautioned again. 5-2 win for the Ukraine wrestler.

11:25: Yongxin FENG (CHN) looks like a contender at 57kg. She gut wrenches her way to a technical superiority win over Bediha GUN (TUR). After not being able to participate in the World Championships last year, the China team has done well this year.

11:20: Ami ISHII (JPN), coming off a victory at the world U20, gets her first senior world campaign off to a good start with a 10-0 technical fall over Grabriela PEDRO (BRA), scoring the 10th point with a stepout at the first-period buzzer to advance to the 68kg quarterfinals. Ishii defeated 2021 world silver medalist Rin MIYAJI (JPN) en route to making the Japan team to Belgrade.

11:13: Defending champion Masako FURUICHI (JPN) survives a first-round scare at 72kg, holding on for a 4-3 victory over QIANDEGENCHAGAN (CHN), a 2016 Asian bronze medalist. Furuichi scores two first-period takedowns, only for the Chinese to come back with a takedown and activity clock point early in the second. Furuichi is one of only two wrestlers to have completed the “grand slam” of world senior, U23, junior and cadet titles.

11:10: Another U20 world champion Amit ELOR (USA) showing her class in her senior-level tournament. She has U23 world champion Anastasiya ALPYEYEVA (UKR) but that doesn't matter as she completes a 10-0 win

11:00: U20 world champion Sakura MOTOKI (JPN) with a quick fall over Ebru DAGBASI (TUR) at 59kg. She moves into the quarterfinals against Alyona KOLESNIK (AZE).

10:55: Qi ZHANG (CHN), a 2019 Asian bronze medalist who returned to international action in Bucharest in July and won the gold, moves into the 59kg quarterfinals with a 10-0 technical fall over Elena BRUGGER (GER).

10:54: European champion Anastasia NICHITA (MDA) records the fall in the first period against Laurence BEAUREGARD (CAN) to advance to the quarterfinals at 59kg.

10:29: Hello to all from sunny Belgrade for Day 5 and another morning session of high drama. Today, the last four women's weights will be up, with competition through the quarterfinals at 57kg, 59kg, 68kg and 72kg.