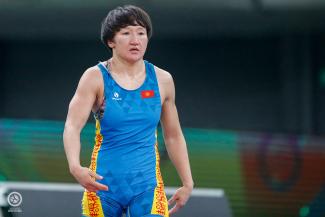 BELGRADE, Serbia (December 14) -- Aisuluu TYNYBEKOVA (KGZ), who made history by becoming Kyrgyzstan's first world champion, stands one win away from claiming a gold at the Individual World Cup in Belgrade, Serbia.

Tynybekova went up 9-0 before Ovcharova scored a takedown late in the first period to cut the deficit to 9-2. In the second period, Tynybekova scored two consecutive step outs before getting a takedown to finish the match.

She will meet Anastasija GRIGORJEVA (LAT) in the 62kg finals. Grigorjeva, a two-time world medalist, won a high-scoring affair, 9-8, over Ilona PROKOPEVNIUK (UKR) in the semifinals.

At 55kg, Annika WENDLE (GER) edged Katarzyna KRAWCZYK (POL) in one of the most exciting finishes of Monday's semifinal round. Krawczyk led 1-0 at the break. Wendle came out strong in the second period, scoring with a four-point move to grab a 4-1 lead. Krawczyk responded a short time later, scoring a four-point move of her own to go up 5-4. She held that lead until late in the match when Wendle scored a go-ahead takedown in the closing moments of the match. The takedown was not awarded initially, but a successful challenge overturned the initial call, giving Wendle the dramatic victory and a place in the finals at 55kg.

In other 55kg semifinal, Iryna KURACHKINA (BLR) rolled to a 6-1 win over PINKI (IND). Kurachkina used a takedown and gut wrench in the first period to go up 4-0. She added a takedown in the second period to win by five.

2019 world bronze medalist Ekaterina POLESHCHUK (RUS) edged 2020 European champion Miglena SELISHKA (BUL) 2-2 on criteria in the semifinals at 50kg. Selishka scored the first point off a passivity and led 1-0 at the break. Poleshchuk took the lead on a takedown in the second period. Selishka inched closer with a passivity point, but ultimately fell short.

In the other semifinal at 50kg, Liliia MALANCHUK (UKR) looked strong in picking up a 16-7 win over Lisa ERSEL (GER).

At 53kg, Maria PREVOLARAKI (GRE) shut out Zalina SIDAKOVA (BLR) 4-0 in a battle of multiple-time world medalists. After going up 2-0 on passivity points, Prevolaraki extended her lead in the second period with a takedown.

Roksana ZASINA (POL) topped Nina HEMMER (GER) 5-2 in the other 53kg semifinal match. Hemmer led late on criteria, but Zasina took control late, scoring a takedown and step out in the final 30 seconds to win by three.

She will meet Yuliana YANEVA (BUL) in the 72kg finals. Yaneva was impressive, scoring three takedowns in the second period on her way to a 6-2 win over Zsuzsanna MOLNAR (SVK). BELGRADE, Serbia (October 25) -- As the current 76kg senior-level landscape sits, it's tough to hand one wrestler supremacy in that weight. A similar situation is arising in the 76kg bracket at the upcoming U23 World Championships. As many as 10 extraordinarily talented and proven wrestlers head into Belgrade eyeing 76kg gold.

Aiperi MEDET KYZY (KGZ) stands out with her Tokyo Olympics experience and the bronze medal at the Senior World Championships earlier this month. The former junior world champion is a part of Kyrgyzstan's women's wrestling trio, which is quickly becoming a force to reckon with.

Medet Kyzy lost a close semifinal at the Tokyo Olympics and later at the World Championships in Oslo. But that experience will help her when she takes the mat at the U23 event as one of the top contenders of her weight class, looking for her first world title since 2017. 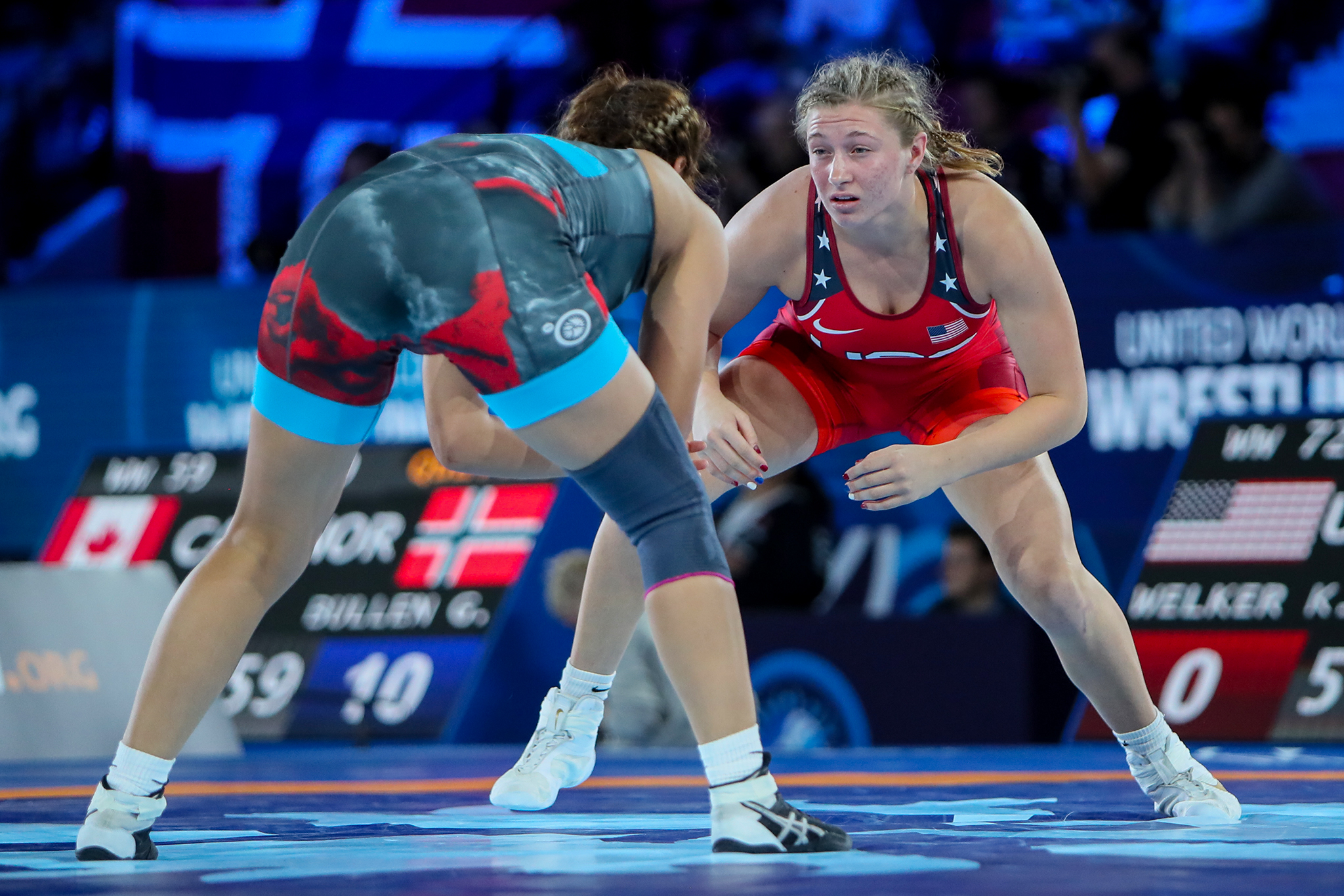 Challenging her will be the most recent junior world champion Kylie WELKER (USA). The 18-year-old Welker, who also competed at the Senior Worlds, would like to put her Oslo disappointment behind her and capture her second world title of the year.

Ufa silver medalist BIPASHA (IND) and bronze medalists Kseniya DZIBUK (BLR) and Dilnaz MULKINOVA (KAZ) are also making the trip to Belgrade with the ambition to change the color of their medals.

Another quartet of medalists will be from the U23 European Championships as gold medalist Evgeniia ZAKHARCHENKO (RWF), silver medalist Aysegul OZBEGE (TUR), and two bronze medalists Enrica RINALDI (ITA) and Diana VLASCEANU (ROU) try to add a world medal to their continental one.

Zakharchenko, a returning bronze medalist, defeated Ozbege 10-0 in the final of the U23 Euros in Skopje after blanking Rindali 8-0 in the semifinal. From the other side, Ozbege and Blasceanu battled it out in the semifinal with the Turkish wrestler coming out on top 6-5.

Given her exploits from the U23 Euros, Kamile GAUCAITE (LTU) can cause a few upsets and reach the podium, which she missed in Skopje. 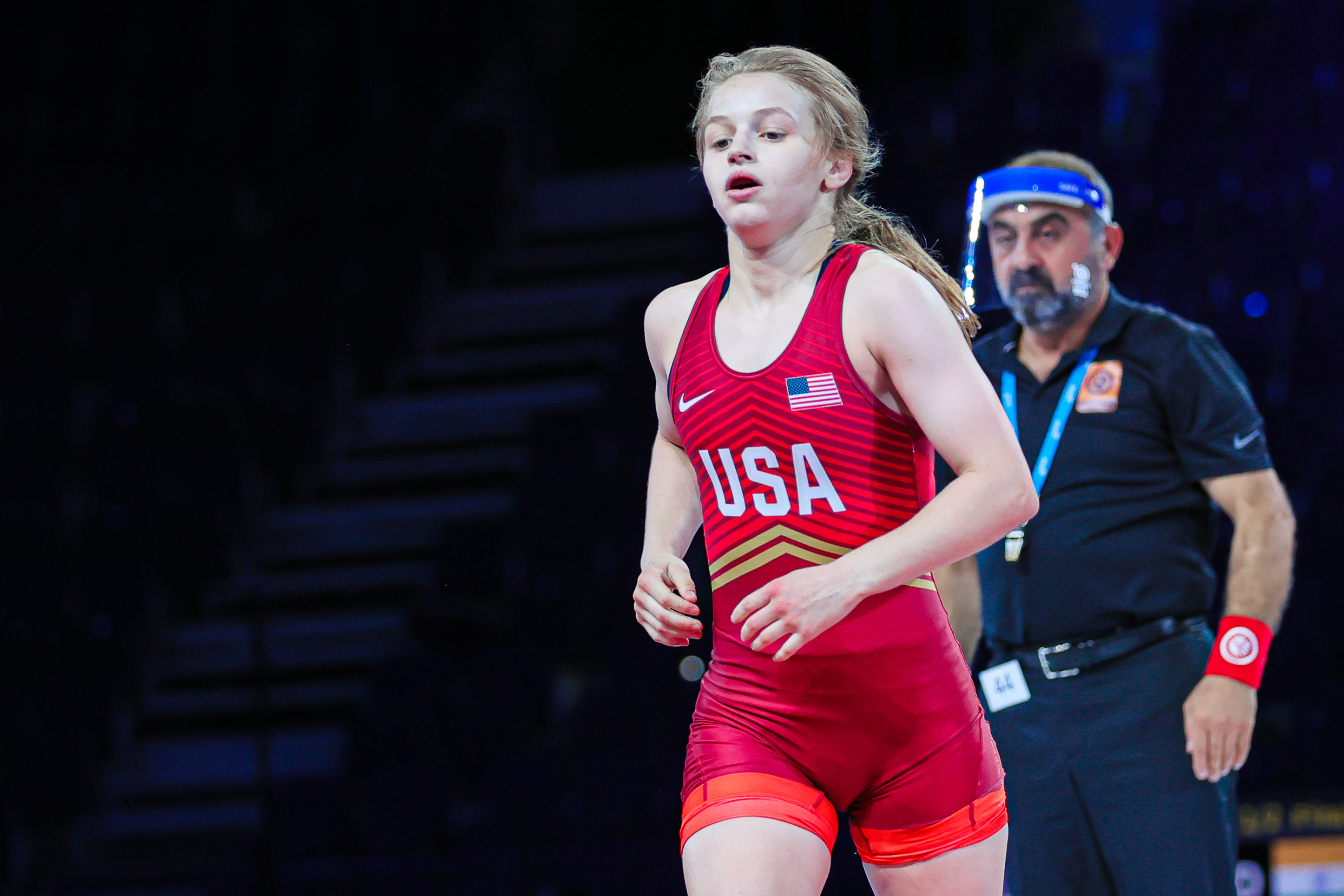 Another weight class that promises to be highly competitive is the 50kg with a Russian Wrestling Federation-USA rivalry on the cards. Junior world champion Emily SHILSON (USA) and U23 European champion Mariia TIUMEREKOVA (RWF) are two of the hottest prospects in the field.

Shilson, a former cadet world champion, showed what she is capable of in Ufa, gut-wrenching her opponents on way to the junior title. She has been to a U23 Worlds before but failed to medal. Tiumerekova too has won a medal at most of the competitions she has entered and can challenge Shilson in Serbia.

Other big names in the weight class are Anastasiya YANOTAVA (BLR) who was second to Tiumerekova in the Skopje tournament, Lucia YEPEZ GUZMAN (ECU) who wrestled at the Tokyo Olympics and junior world bronze medalist Munkhgerel MUNKHBAT (MGL).

But as a team, Ukraine will be a severe threat to the team title, with most of the medal-winning members from U23 Euros being part of the squad. The list includes 55kg champion Khrystyna DEMKO (UKR), Tetiana RIZHKO (UKR) at 62kg and gold medalist at 68kg Oksana CHUDYK (UKR). 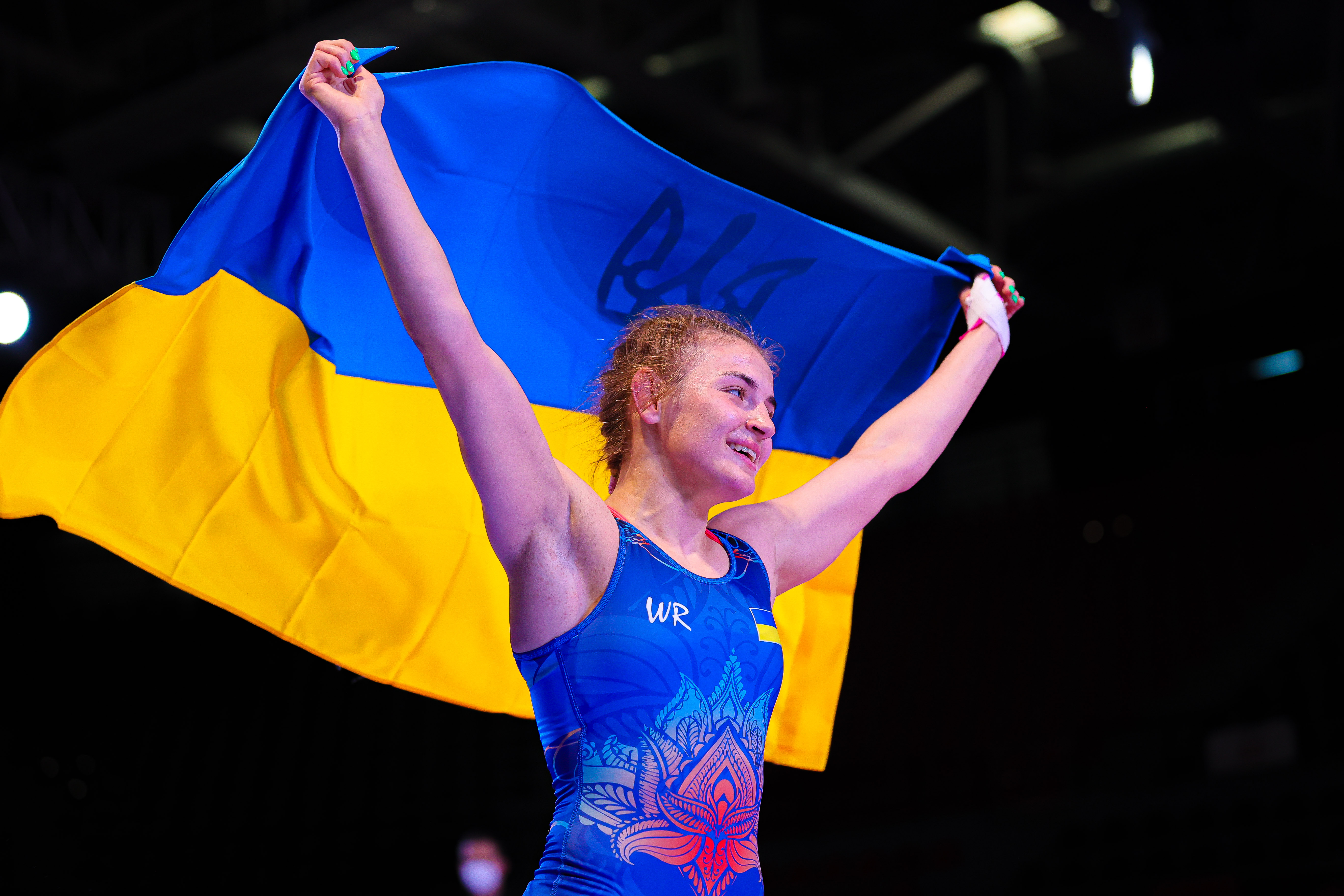 At 57kg, the ever-improving Alina HRUSHYNA AKOBIIA (UKR) is gunning for the gold medal which she missed in 2019 after losing the final to Sae NANJO (JPN). Hrushyna Akobiia, who has a U23 bronze as well from 2017, will be the favorite to win the title in the absence of women's wrestling powerhouses like Japan and China as she has already won the continental tour without giving up a point in the process. The Ukraine wrestler has not competed since May but it's unlikely that anyone will challenge her to the final.

Silver medalist to her in Skopje, Patrycja GIL (POL), and the two bronze medalists from the same event Othelie HOEIE (NOR) and Viktoriia VAULINA (RWF) are also part of the field looking for a U23 medal. Junior world  silver medalist Aurora RUSSO (ITA) can surprise the field, similar to how she did in Ufa.

Individual World Cup winner Rizhko will be trying to win her first world title in her long career, which began with a cadet European title back in 2013 when she was 15. In Skopje, she manhandled everyone, winning her four bouts via fall or technical superiority, including the final against Tatsiana PAULAVA (BLR). The Belarusian will try to avenge that loss if the two meet in Belgrade.

At 55kg, Demko will be making her third trip to the U23 Worlds but is yet to win a medal. In 2019, she lost the bronze medal bout while finishing eighth in 2018. This year, Tokyo Olympian Andreea ANA (ROU) will be her toughest challenge, along with Aleksandra SKIRENKO (RWF), who finished second to Demko at the U23 Euros. Both were dominant at the Skopje event, but the final was one-sided, with Demko winning 12-1.

With two European titles under her belt this year at 68kg, Chudyk is in red-hot form and is expected to continue that when she wrestles at her first U23 Worlds. But it won't be a cakewalk for her, especially with Vusala PARFIANOVICH (RWF) and Nesrin BAS (TUR) waiting to avenge their losses from Skopje. This will be the second U23 Worlds for Parfianovich, but she can bank on her silver medal-winning run at the U23 Euros to turn around her performance.

Another team looking for a place on the podium is the Russian Wrestling Federation. They'll bring a few future stars, too. Ekaterina VERBINA (RWF), the U23 European gold, will try to make this opportunity count after losing in the bronze medal bout at the 2019 U23 Worlds. No one was able to score a point on her during the Skopje tournament. In the final, Zeynep YETGIL (TUR) conceded an injury default.

If Yetgil, a returning bronze medalist, can repeat her performance from Euros, a thrilling bout is expected against Verbina. The Turkey wrestler placed seventh at the Senior World Championships in Oslo but not before shocking Tokyo bronze medalist Bolortuya BAT OCHIR (MGL).

Mariia VYNNYK (UKR) is also in contention, given that she only lost to Yetgil 3-3 in Skopje.

At 72kg, Marina SUROVTSEVA (RUS) will use her Oslo experience to win a medal in Belgrade. The silver medalist from U23 Euros juggled 76kg and 72kg, but after a ninth-place finish in Oslo, she moved back to the lower division.

But two-time Asian champion Divya KAKRAN (IND) and junior Worlds silver Lilly SCHNEIDER (GER) will be her biggest threats, along with Anastasiya ZIMIANKOV (BLR), the bronze medalist from U23 Euros. 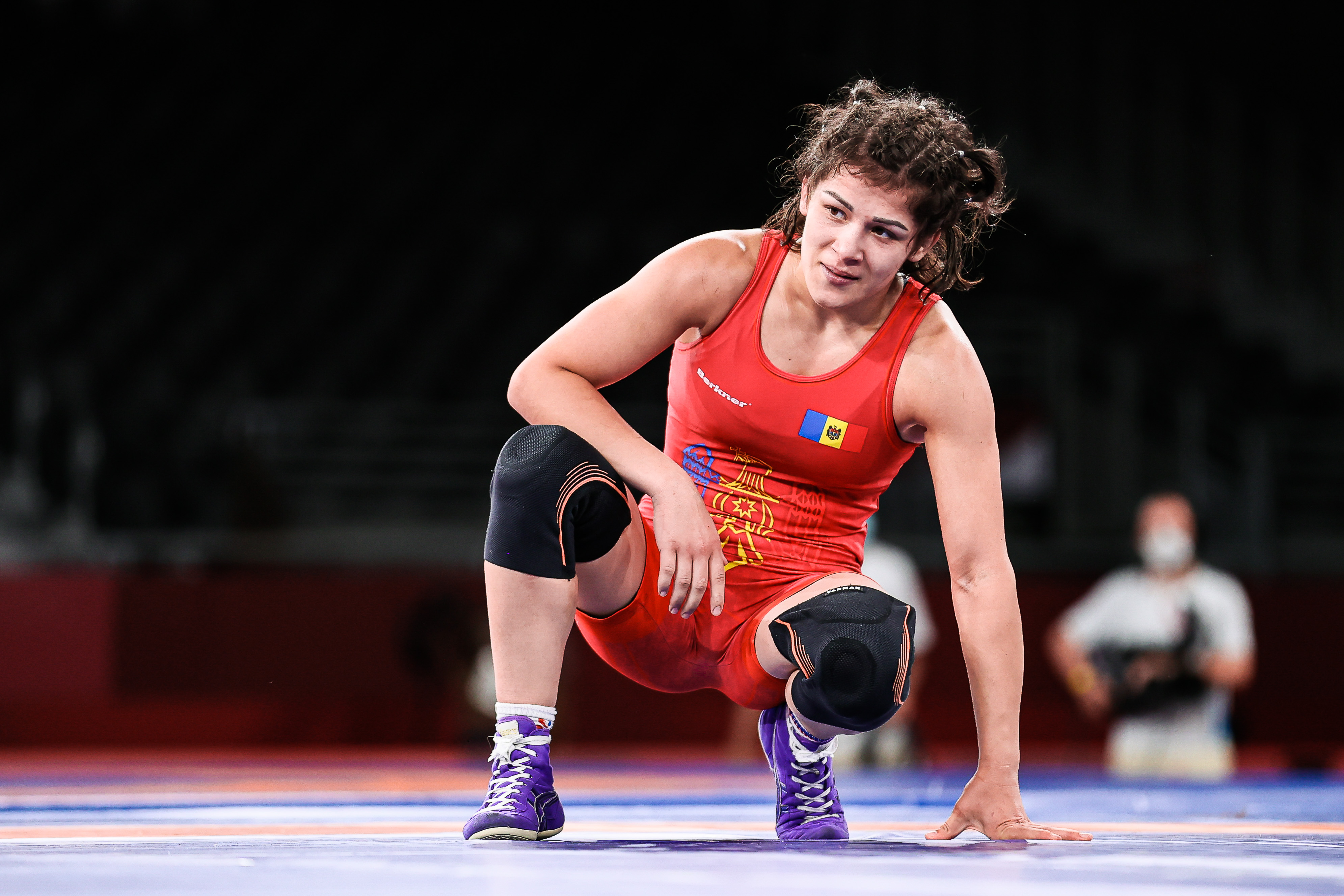 Though there is no doubt that Anastasia NICHITA (MDA) will be the clear favorite to win the 59kg weight class, junior world champion Anastasia SIDELNIKOVA (RWF), returning bronze medalist Anhelina LYSAK (POL) and Krystsina SAZYKINA (BLR) can stop the Moldovan.

Nichita has European titles at all levels, including the senior one, which she won in 2020 after beating 2021 world champion Bilyana DUDOVA (BUL). Her performance at the gold-winning Individual World Cup and later at the U23 Euros confirm the fact that it will be near impossible to get past her in Belgrade. 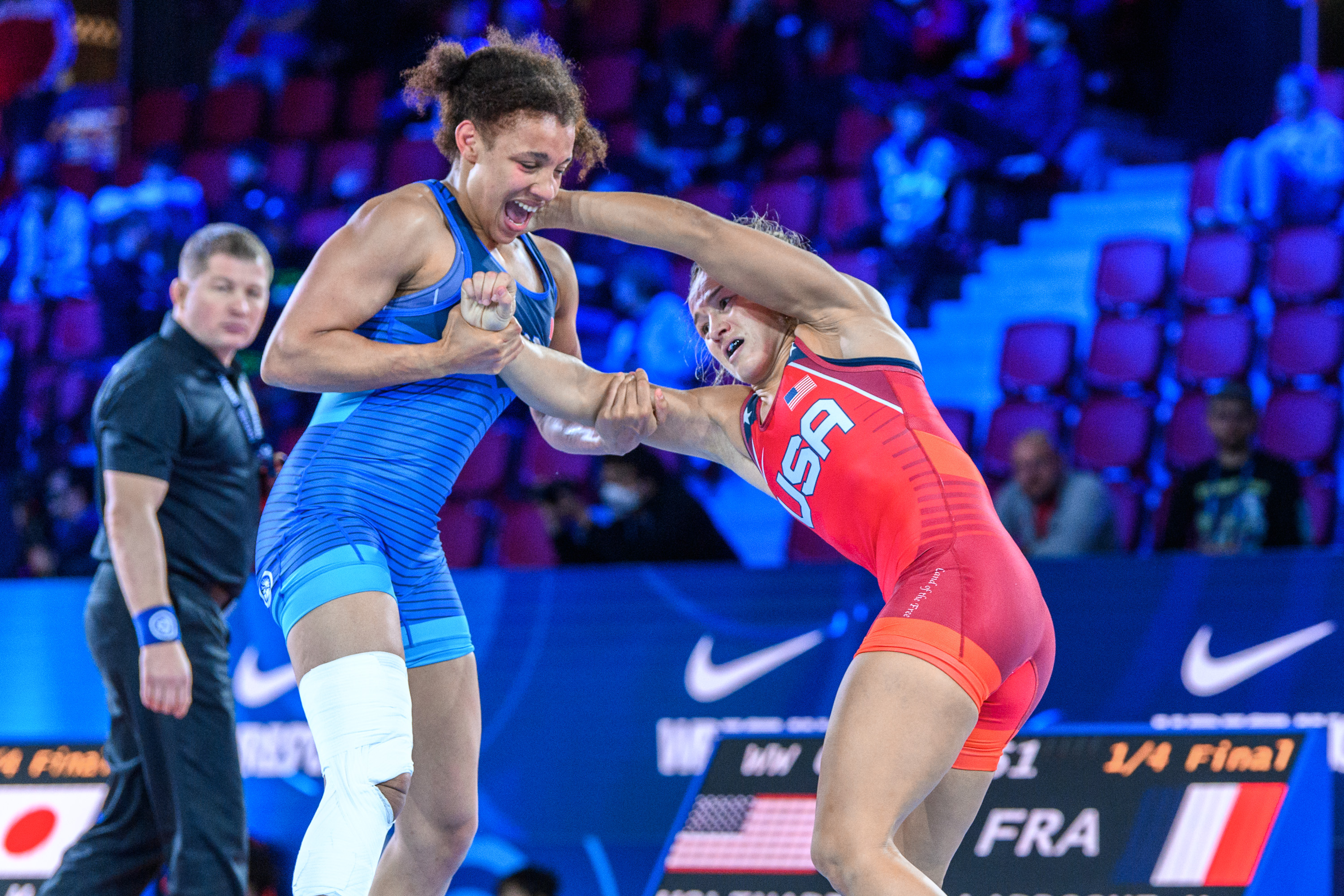 A similar story can run in the 65kg weight class in which two-time senior World medalist Koumba LARROQUE (FRA) begins her quest to capture the second U23 World title. The 2017 champion has been struggling with a knee injury which makes it even more difficult to make a comeback since that silver medal at the 2018 senior Worlds.

She did win the senior European title this year, but the chink in her armor -- to give up points late in the bouts -- could be a cause of concern for her. At the Individual World Cup, Olympics Games and even the Oslo World Championships, Larroque suffered heartbreaking losses.

One wrestler who can cause an upset is Kateryna ZELENYKH (UKR), a silver medalist from U23 Euros. Zlenykh was unstoppable at that tournament and it was only in the final that she met Irina RIGACI (MDA) and lost 5-9. But her ability to chalk out a big throw from nowhere did catch a lot of her opponents and she used it well to claim falls.

Women's wrestling begins Wednesday, November 3, with five weight classes followed by the qualification rounds of the remaining five weights on Thursday at the Belexpocentar arena.