What to Know: Ranking Series Points, Olympic Seeding, Prize Money and the 2021 Season 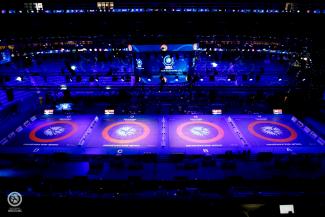 CORSIER-SUR-VEVEY, Switzerland (February 1) -- The COVID-19 pandemic has significantly impacted the competition schedules of the sporting world, including wrestling. The changes to competitions and myriad travel restrictions have meant that United World Wrestling has been asked to adapt with changes to the 2021 schedule and competition arrangement.

The 2021 season will be unlike any in recent memory. While athletes gear up for the Olympic Games by competing in qualification events and tournaments that will impact their seeding, they will also be wrestling in tournaments which help determine the 2021 Ranking Series champion. Those two trajectories will mean two sets of points for athletes, fans, and coaches to track in 2021.

The Tokyo 202One seeding is almost complete, but there are two tournaments left where athletes can gain points. The Poland Open (June 8-13) will be like the 2020 Matteo Pellicone Ranking Series event and impact seeding for the 2021 Olympic Games. Additionally, athletes from China, Turkmenistan, and North Korea competing at the 2021 Asian Continental Championships will earn seeding points for the 2021 Games based on their finishes. These nations were withheld from the 2020 continental championships due to COVID-based travel restrictions.

If the Olympic Games and the Senior World Championships are organized the same year, an increase of 20% of the points will be given to the Olympic Medalists.

Fans, athletes and coaches can follow Tokyo Seeding on the Olympic Games section of the UWW website, HERE. The Ranking Series points, which are currently at zero for all athletes, will be kept on the front page of the website. Those points will start to accumulate in March with the Matteo Pellicone tournament.

Additionally, the UWW bureau recently approved a generous $600,000 prize package for the 2021 Ranking Series, with money distributed to each of the 30 weight classes. Previously the Ranking Series award allocation went to the top three overall point-getters in each style. The 2021 money will be distributed to the top three athletes per weight in the following amounts.

The 2021 prize money combines the amount that was reserved for 2020 but was not distributed due to the impact COVID-19 had on competition.

The 2021 Competition Calendar as it impacts Olympic Qualifications, Tokyo seeding, and Ranking Series 2021:

Tzeno Tzenov has been made an Honorary Vice-President who passed away in 2020, following his long-term dedication to the sport.