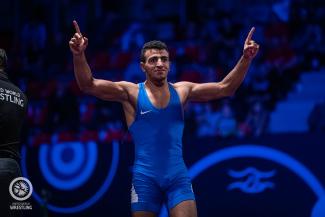 Reviewing results from the U23 World Championships and previewing the upcoming Women's Wrestling and Greco-Roman World Cups.

1. Egypt's Rising Star El Sayed Defends U23 World Title
Ten days. That’s how long it took for Mohamed EL SAYED (EGY) to bolster his resume by a pair of world titles. In just under two weeks, the 21-year-old Egyptian rising star steamrolled his way to the top of the podium at the U23 World Championships and World Military Games.

El Sayed kick-started his impressive two-week run on October 23, taking out five wrestlers in Wuhan, China, to win the World Military Games title at 67kg. Then, El Sayed downed five foes in Hungary last weekend and defended his U23 world gold medal from a year ago.

The Nur-Sultan world fifth-place finisher capped off his world-title run by obliterating Aliaksandr LIAVONCHYK (BLR), 8-0, in the 67kg finals. In addition to his finals win, the man who qualified Egypt for the Olympic Games at 67kg, scored perhaps his most significant win of the tournament when he bested Katsuaki ENDO (JPN) in the semifinals. The Egyptian wrestler came out on top of that matchup between returning U23 world champions, 7-5.

Egypt won't compete at the 2019 Greco-Roman World Cup, so the next time wrestling fans can catch El Sayed in action could be at  January's Matteo Pellicone, which is the first Ranking Series event of 2020.

Haruna OKUNO (JPN) was one of seven Japanese wrestlers to win a U23 women's wrestling title. (Photo: Sachiko Hotaka)

2. Japanese Women Seize Seven of Ten U23 World Golds
The Japanese women’s wrestling team capped off an extraordinary run to a U23 team world title with a 37-3 record, which culminated in ten medals – seven of which were golds. They finished 125 points ahead of second-place China, who finished with 105 points.

In total, Japan’s U23 women’s world team had seven champions, two runner-ups, and a bronze-medal finisher.

Russia’s run to a fourth consecutive freestyle team trophy came on the back of Razambek ZHAMALOV’S 74kg title-winning effort. Zhamalov, a 2018 junior world runner-up, became a world champion for the first time in his career with a smothering 8-1 victory over Mohammad Ashghar NOKHODILARIMI (IRI) in the 74kg finals. Four other Russians joined Zhamalov in the finals, but that quartet settled for silver medals after falling in their respective gold-medal matches. The Russian Federation also had a pair of bronze medalists – bringing their overall medal count to seven.

Kawai and Gray, who combine for eight world titles and a Rio Olympic gold medal, are unquestionably the most dominant women's wrestlers in the world. Kawai, who'll scrap at 57kg, has won three consecutive world titles after claiming gold in Rio de Janerio at the 2016 Olympic Games. Gray, who is coming off winning her American history-making fifth women's wrestling world title, will wrestle at 76kg.

The Women's Wrestling World Cup starts on November 16 and will be streamed live on www.unitedworldwrestling.org.

Borrero and Ota both won world titles in Nur-Sultan, but the Japanese wrestler will begin his ascent from his title-winning non-Olympic weight of 63kg to the Olympic weight of 67kg, where the Cuban wrestler is the current world-title holder. Shortly after winning his world title last month, Ota announced that he'll climb up 4kg to 67kg to make a run at improving his silver medal from the Rio Olympic Games where he fell to Borrero in the finals.

The Greco-Roman World Cup starts on November 28 and will be streamed live on www.unitedworldwrestling.org. 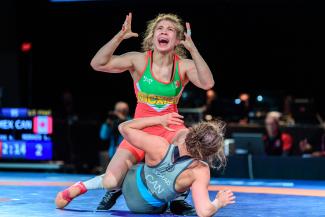 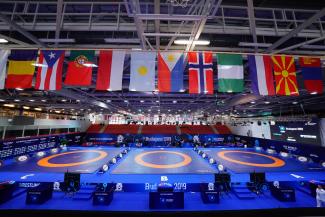