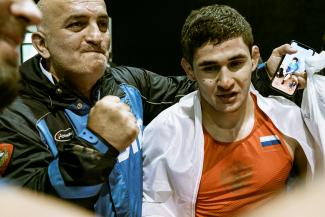 BELGRADE, Serbia (November 7) – As Russia and Iran battled for the team title, the 74kg final was the perfect stage to decide it. Chermen VALIEV (RUS) was chasing the gold he was denied in 2019 and Mohmmadsadegh FIROUZPOURBANDPEI (IRI) was looking for his debut world title. And they put on a show.

Valiev began with a stepout and then a takedown on edge to lead 3-0 and seemed like he would run away with the bout. But just before the break, Firouzpourbandpei got one back with a stepout.

As the Iranian upped the pace, Valiev began to tire out but only gave up a point for stepout with caution. The Russian was always on the backfoot but Firouzpourbandpei could never finish his attacks.

Valiev scored a takedown on a counter to extend the lead 5-2 with a minute and 27 seconds remaining in the bout. He then countered another attack and led 7-2. In a dramatic finish, Firouzpourbandpei made a huge four-point throw in the final two seconds but that was a little too late. 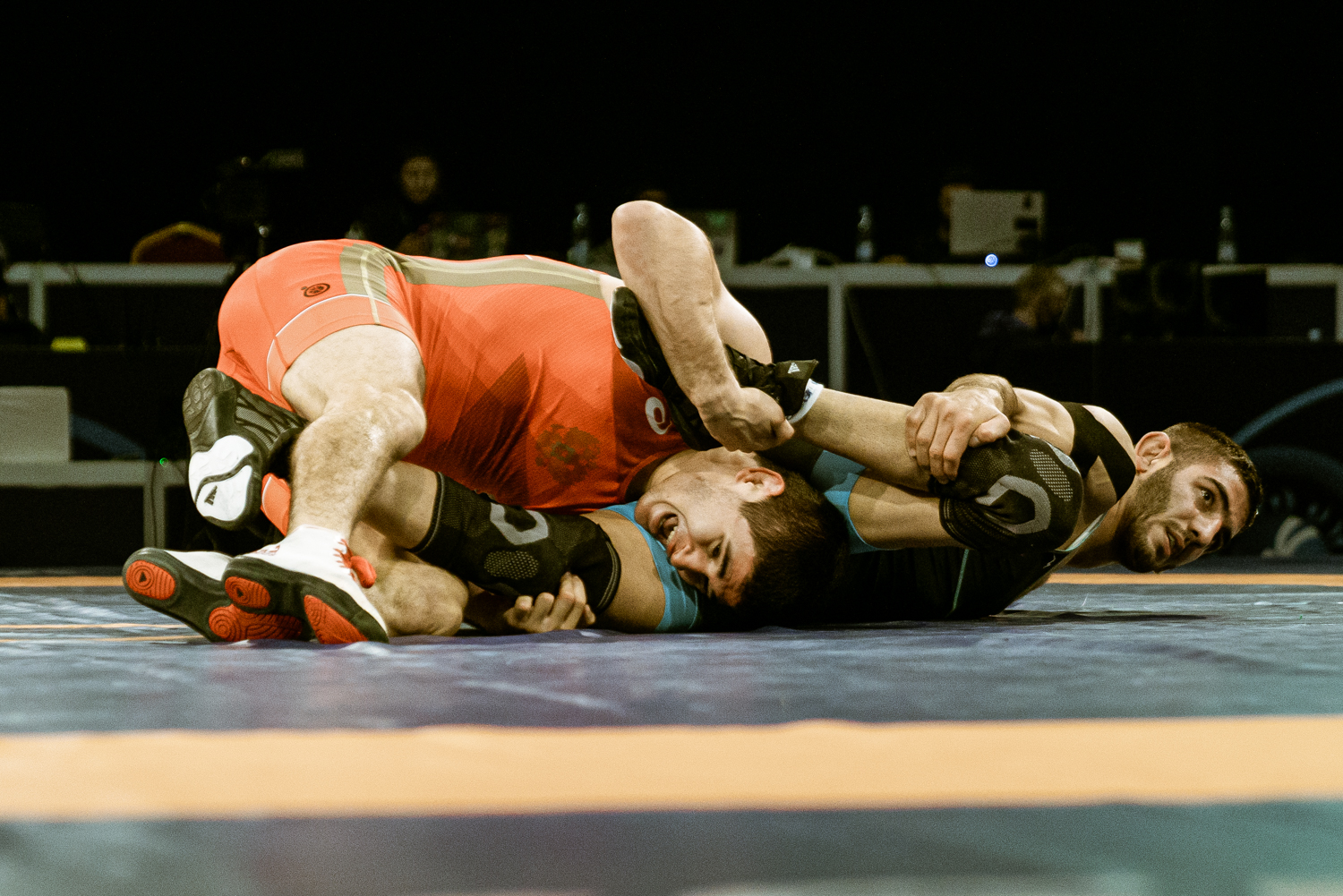 The gold medal for Russia confirmed their team title irrespective of other results. In the end, they captured it with 145 points while Iran finished second with 140. The surprise came at the third position which went to Armenia who had 114 points.

Russia had three finalists Sunday but only Valiev could win a gold medal. Iran also had two wrestlers in the final but both lost which hurt their chances to win the team title.

Arsen HARTUNYUNYAN (ARM) ended his long wait for a world title as he won the gold medal at 61kg while Mukhammed ALIIEV (UKR) gave Ukraine their first-ever freestyle U23 world champion at 86kg.

At 92kg, Osman NURMAGOMEDOV (AZE) finished at the top of the podium with a controlled win while the USA also finished with one gold as Anthony CASSIOPPI (USA) secured a first-period fall over Azamat KHOSONOV (GRE) to close out the U23 World Championships in Belgrade, Serbia.

On his way to the 74kg gold, Valiev had scored an important win over returning U23 world champion Turan BAYRAMOV (AZE) in the 1/8 finals which perhaps boosted his confidence.

“It took me a while to get here,” Valiev said. “I am very happy that I’ve made it. For the final, we’ve prepared a tactic with the coaches to wrestle till the very end, not to give up. He wasn’t trying to hit a double-leg a lot, he was just pushing.”

As he graduates to the senior level, the Ardon-native Valiev understands the challenges of the tough 74kg weight in Russia and internationally.

“In 74kg, the competition is really big both in Russia and in the world, but I am ready for it. I’ll work harder and I think I’ll make it,” he said. 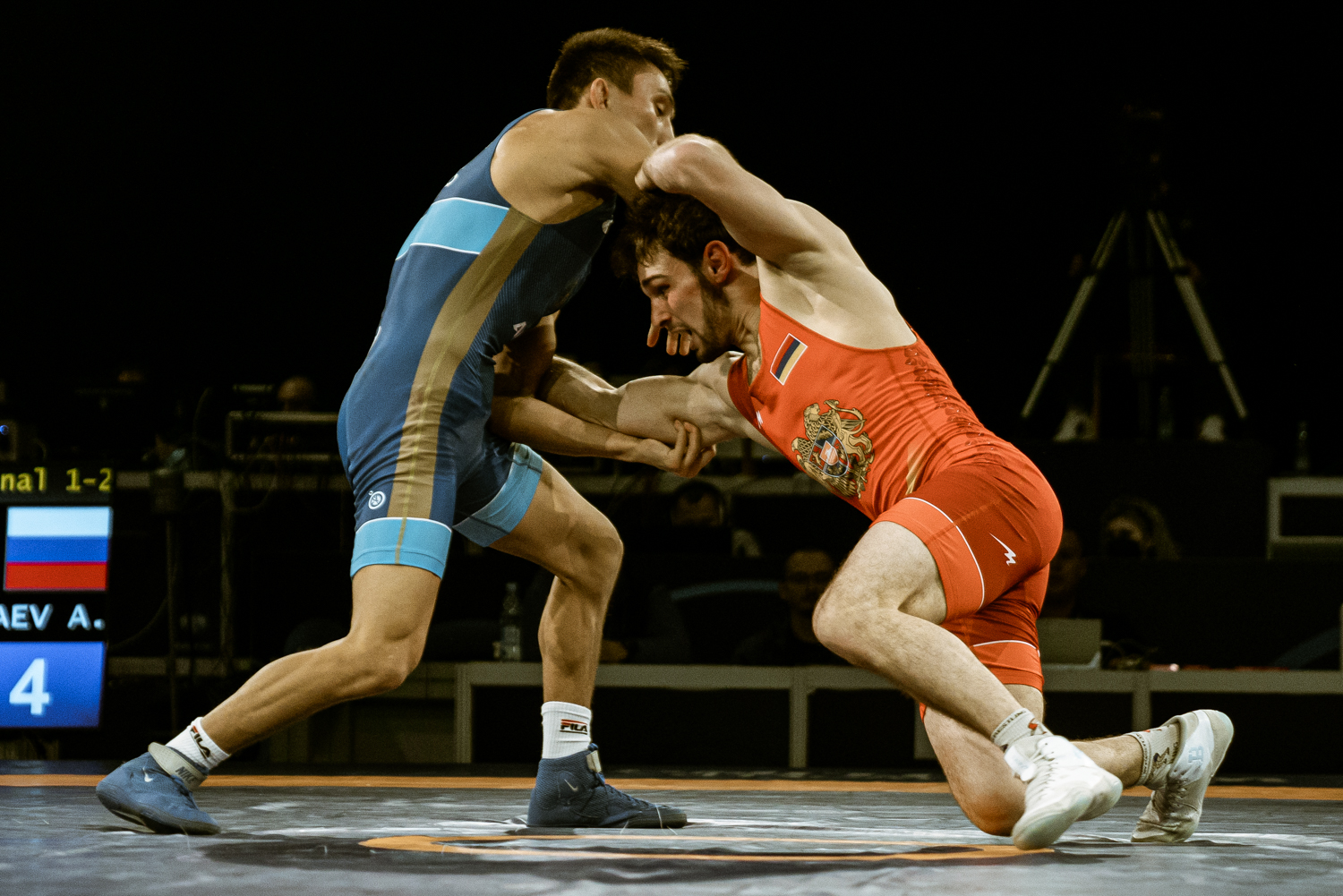 Russia had a finalist at 57kg as well but Hartunyunyan looked the more committed wrestler as he stopped Artur CHEBODAEV (RUS) 11-7 in the final.

The Oslo bronze medalist set the pace of the bout early with a takedown and then a stepout to make it 3-0. But he was on in trouble when Chebodaev scored a takedown and laced the Armenian for the lead. At the break, the Russian led 6-4.

The match changed in the second period when Harutyunyan scored a takedown and worked a leg-lace for four more points for a 10-6 lead. The two exchanged stepouts did not matter much in the end.

“I was ready to wrestle for the six minutes and finish it 10-0,” Harutyunyan said. “Bu the final turned out to be interesting.”

Harutyunyan has previously made seven trips to World Championships but this is the first time he has been able to win the title. This could well be the start of a legendary career for the Armenian.

“This is just the beginning,” he said. “I will become the senior and Olympic champion. Previously, I did not have enough experience and something always goes wrong at the senior Worlds.”

By ending the world title drought, the Armenian has got a load off his back. After the bronze in Oslo, decided to wrestle at the U23 Worlds to win and is now ready to repeat the performances.

“After Oslo, I thought that there will be another way open to me and I would finish the year in a good way,” he said. “Next year, I will wrestle as a world champion and I will have fewer worries than I had. I will correct my mistakes so that I can wrestle well at the Paris Olympics.” 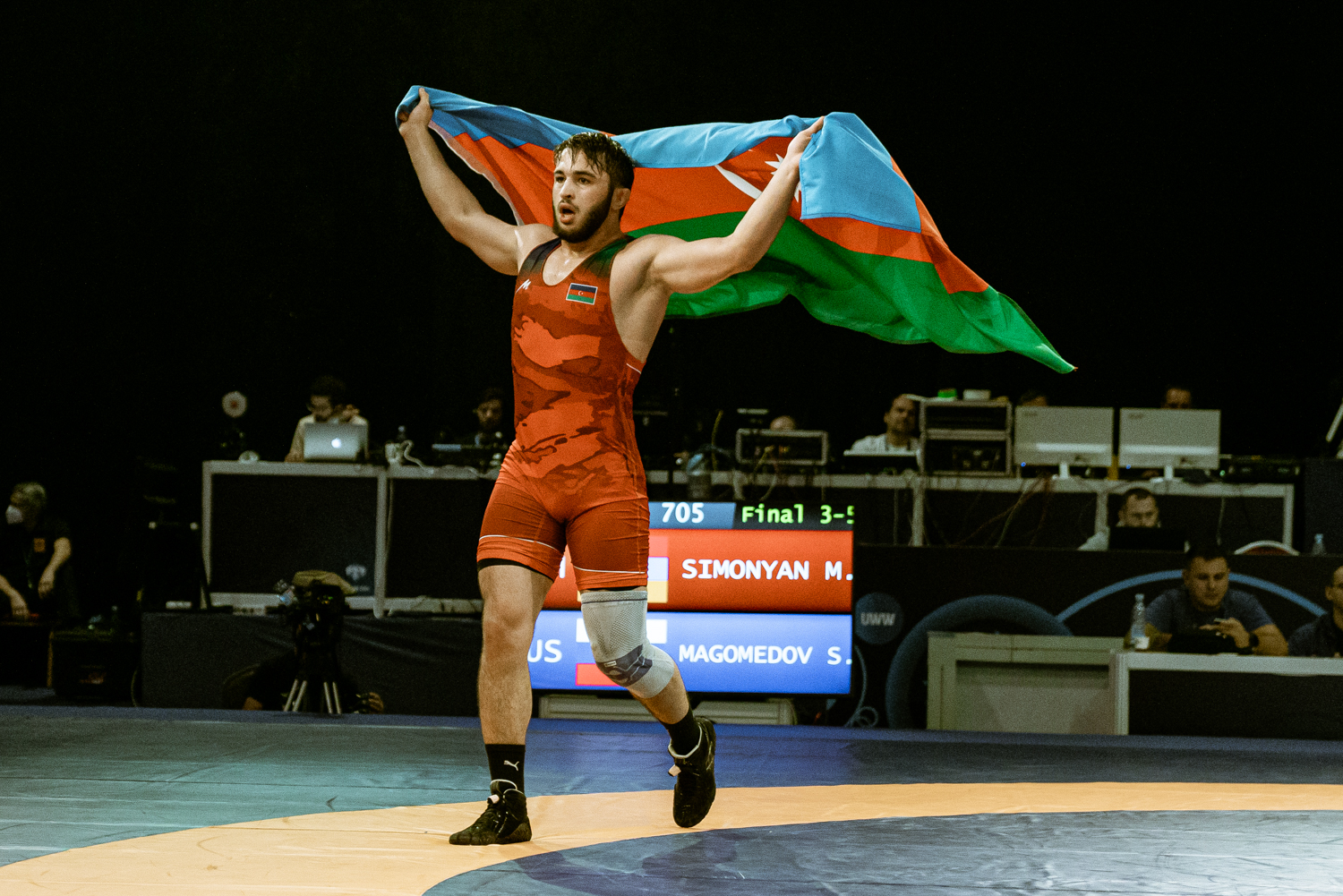 Russia suffered another heartbreak as Oslo bronze medalist Osman NURMAGOMEDOV (AZE) put his '21 U23 Euro final's loss behind and upgraded to gold at the U23 Worlds. He defeated Azamat ZAKUEV (RUS), 4-2 in the final.

Nurmagomedov's semifinal against junior world champion Amirhossein FIROUZPOURBANDPEI (IRI) was a match that will be remembered for long. The Iranian wrestler was caught in a leg lace and the Azerbaijan wrestler was awarded a 10-0 win.

But Iran challenged the call saying that the final action was out-of-bounds. It was confirmed in the reviews which gave a second life to Firouzpourbandpei who mounted a comeback but still fell short 8-10.

In the final, Nurmagomedov, from the same family as Olympic champion Sharif SHARIFOV (AZE), was in much more control as he scored two takedowns to win the bout 4-2.

"I was training hard. I was mentally prepared to win," Nurmagomedov said. "In the final match the opponent was very strong. I wrestled him at the U23 European, it gave me confidence, I know his wrestling style well. It was easier, we analyzed him well with the coaches."

The Azerbaijan wrestler had defeated Zakuev 5-4 at the U23 Euros as well but in the final there, he lost 3-4 against Erhan YAYLACI (TUR) after being cautioned for a singlet pulling.

In Oslo, he reached the semifinal but lost to Magomed KURBANOV (RUS) and the Azerbaijan wrestler accepted that there are areas that he need to improve.

"Kurbanov is just a physically strong guy," he said. "I feel that I just don’t have enough strength. In a few years I’ll meet him and the match will end differently."

Hailing from Dagestan, Nurmagomedov trains in Makhachkala and Khasavurt, but has been in Baku, Azernaijan recently.

"I have two personal coaches and since 2018, I’ve been in the same team with Sarifov as well. It’s a pleasure to train with such professionals," he said. 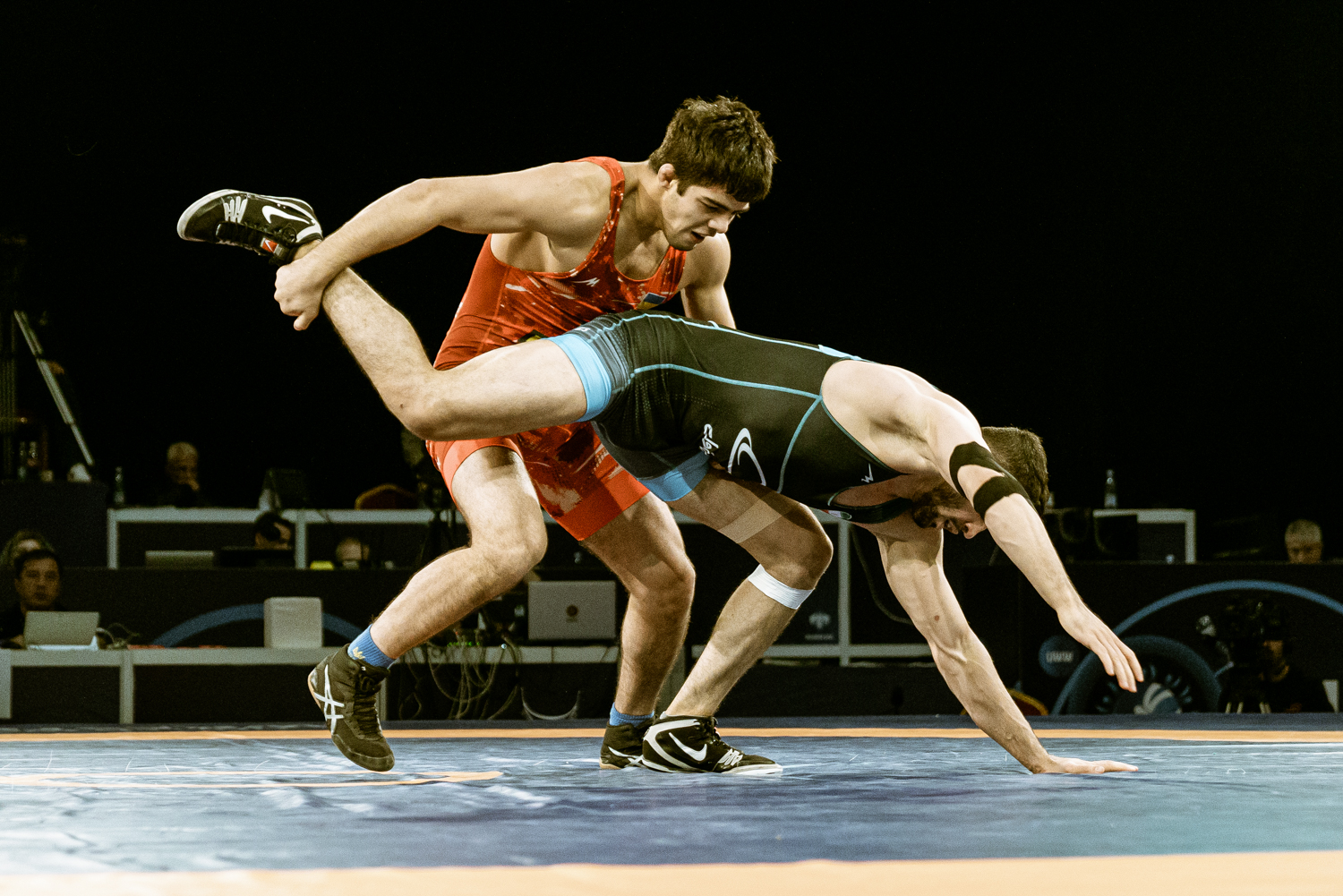 “I still can’t believe I am a champion,” Aliiev said. “I was so proud when the anthem was playing and the flag was raised.”

The 22-year-old trains in Kharkov, Ukraine and began training only when his father, a boxer, pushed him into the sport and not boxing.

Wrestling at the first World Championships, Aliiev began with a quick takedown which Gholami countered with his own. He took a clear lead with another one but Aliiev cut it short with a stepout.

Surprisingly, it was the Iran wrestler who was struggling to find his feet on the mat as Aliiev kept coming back. In the second period, he added a takedown and stepout before a body lock exposure gave him two more. He ended the bout 11-4.

“I was wrestling everyone here for the first time and it was challenging for me,” he said. 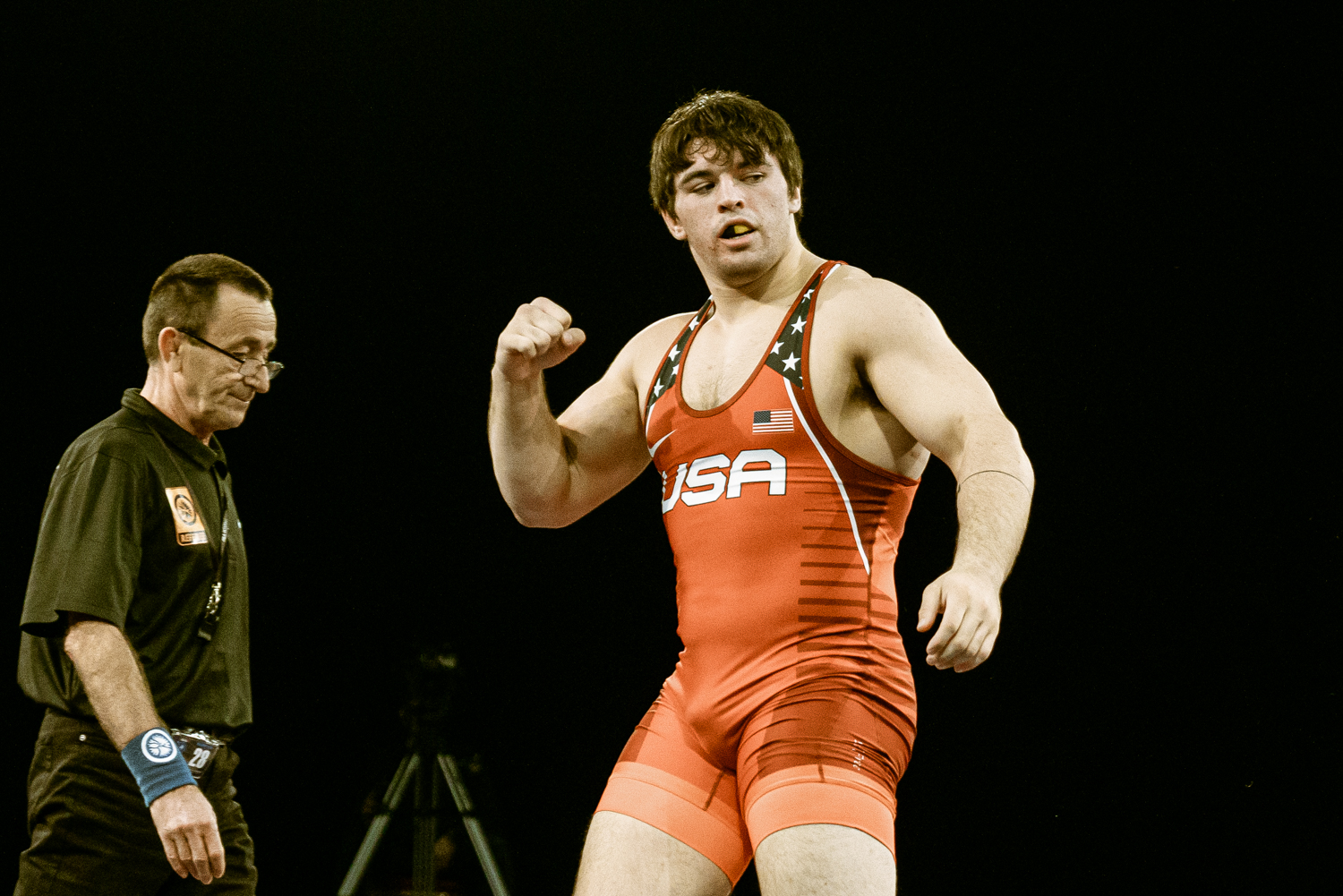 At 125kg, Cassioppi ended a stunning run at the U23 Worlds with a victory via fall over Azamat KHOSONOV (GRE) and a gold medal for the USA.

It all happened in the first period as Cassiopi scored a takedown and then had Khosonov in a lace. The Greek tried to score a four but fell on his back and the USA wrestler held him to the mat and secured the fall.

“I just came out here and do my best. I just wrestled to my abilities,” Cassiopi said. “I have not competed at this high level before. I expected to win and wrestle my positions. He did help me stay in my ties.” 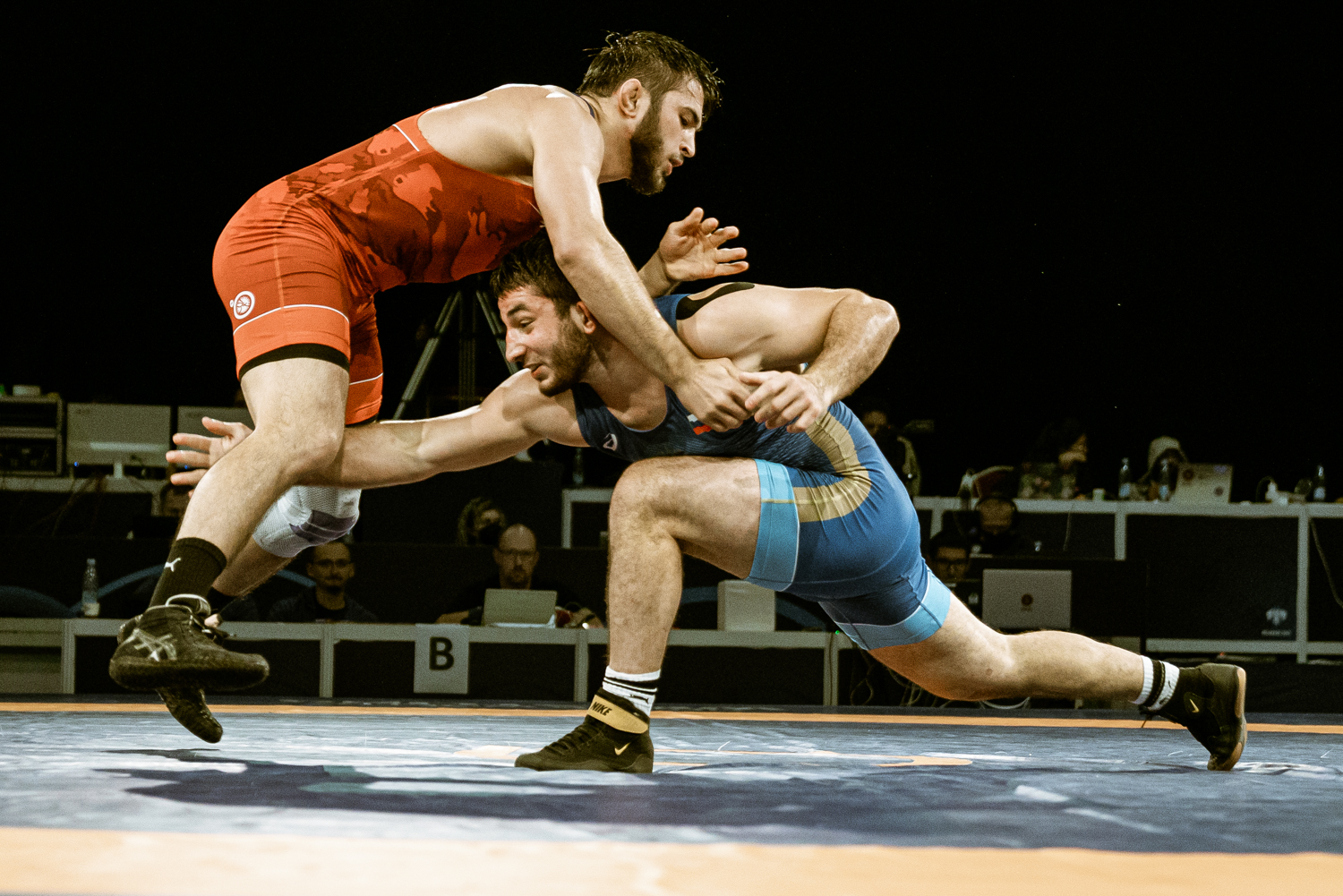