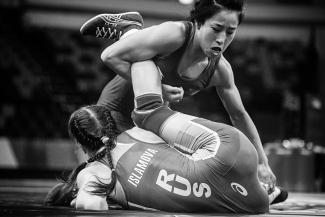 RIO DE JANEIRO (January 30) – London Olympic champion and defending world champions Natalya VOROBIEVA (RUS) came to Brazil in the hopes of starting her 2016 repeat tour on solid footing. However, the Russian champion’s hopes were dashed early in the tournament Saturday at the HSBC Arena 1, as she dropped a back-and-forth first bout to Dorothy YEATS (CAN) 7-5.

Up by a point with a minute to wrestle, Vorobieva began to back away from her offense, allowing the motivated and well-conditioned Yeats to sneak in for a last second snap down and go-behind. After a failed review Yeats took home the two-point win.

The loss cleared the way for world silver medalist ZHOU Feng (CHN) to barrel into the finals without worry of a repeat loss to Vorobieva in the finals. Zhou slammed her way through early competition before meeting Yeats in the finals. Zhou started slow but with a minute left in the second period blew open her three-point lead to secure a technical fall, 11-1.

Teammate and 2013 world champion SUN Yanan (CHN) looked equally dominate throughout the tournament. She took the gold in the finals after a gut wrench attempt left her opponent Valentina ISLAMOVA (RUS) with a dislocated elbow.

In one of the most entertaining matches of the day Sakano YUI (JPN) bested China’s third finalist, LI Quian (CHN), 4-1. 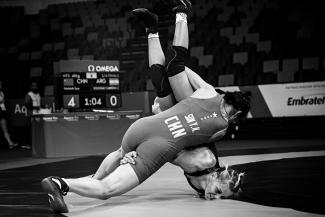