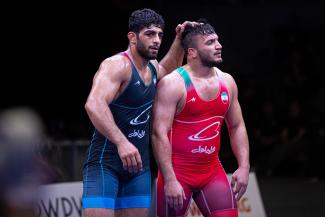 WARSAW, Poland (June 13) --- After the 97kg Greco-Roman final, Mehdi BALIHAMZEHDEH (IRI) went up to the judge to seek answers. His actions were justified as he had not only lost the gold medal to compatriot Mohammadhadi SARAVI (IRI) but also the opportunity to represent Iran at the Tokyo Olympics.

Iran, treating the Poland Open as the selection trial for Tokyo Games, had entered the two and on Sunday, they dominated the field and reached the final. This was the last category that was undecided for Iran after three freestyle and one Greco-Roman class finalized in Warsaw.

They had to wait till the end of the day as it was the final bout and then more as both Iran wrestlers had mistakenly wore opposite singlets. 50 seconds into the bout they changed the singlets and resumed the bout. Saravi got the advantage of Balihamzehdeh being passive in the first period and he got an exposure to lead 3-0.

Balihamzehdeh was hoping that Saravi will be warned for inactivity as well but that did not happen as the latter kept on the pressure throughout the period. It ended 3-0 in favour of Saravi, completing the Iran team for the upcoming Games.

His gold medal also pushes him to third position in the Tokyo seeding as he collected 16 points. His total of 52 points takes him ahead of Cenk ILDEM (TUR) who is now out of the seeding.

Tadeusz MICHALIK (POL) finished fifth in Warsaw and collected 10 points for a total of 42 to edge past Ildem by a point.

There was no other major shuffle in the Olympic seedings for the weight classes that were in action on Sunday.

At 87kg, veteran Uzbek wrestler Rustam ASSAKALOV (UZB) won a bronze medal to collect 12 points but that doesn't change his third position in the seedings. 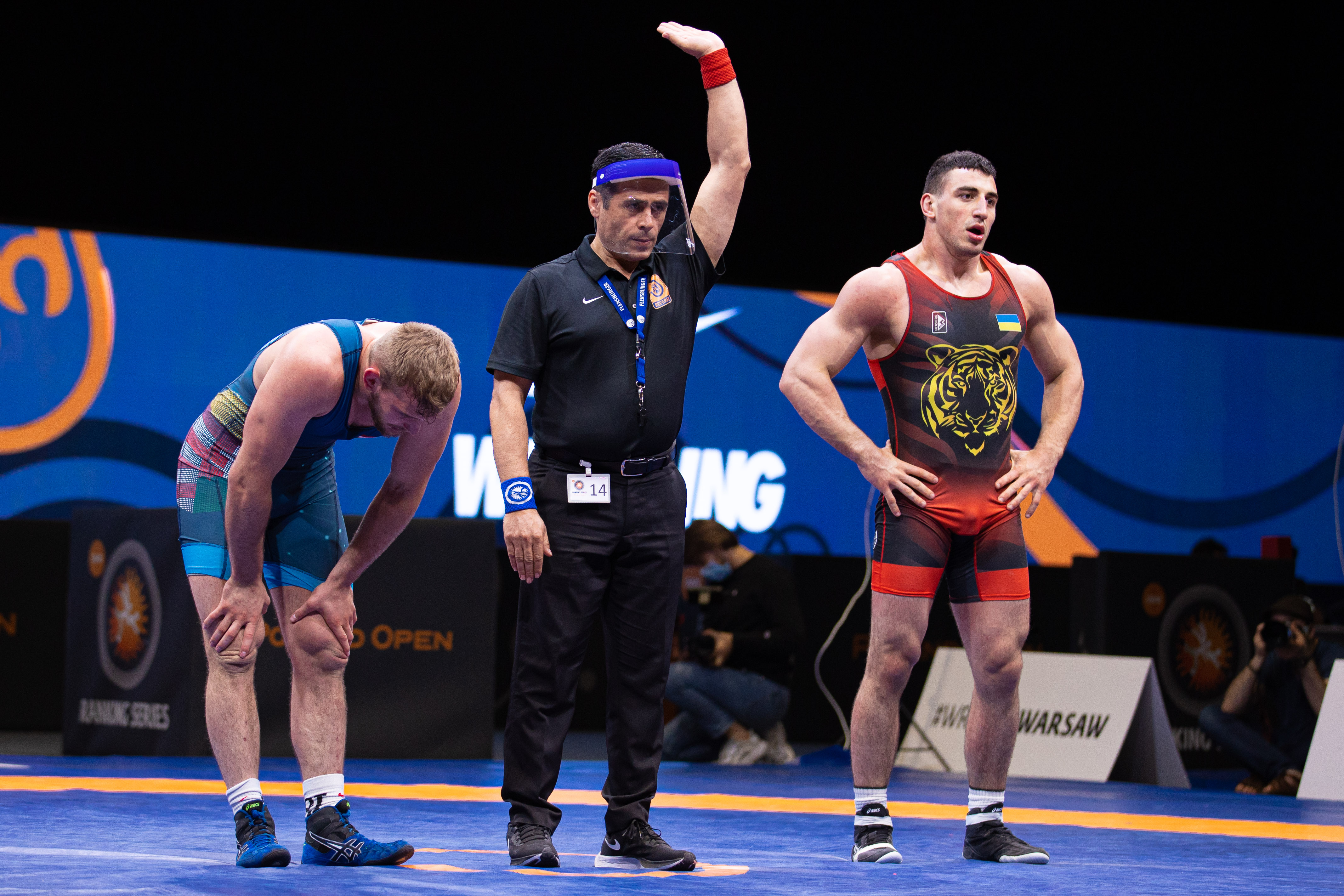 The gold medal was captured but he upcoming star and two-time U23 world champion Semen NAVIKOV (UKR). In the final, he defeated Istvan TAKACS (HUN) 2-1 with all points scored on referees call.

Takacs had earlier stopped Rio Olympic bronze medalist Assakalov's run in the tournament with a 2-1 win in the semifinal. The Uzbek then came back in the bronze medal bout against Arkadiusz KULYNYCZ (POL) with a big fall.

The next big thing in Ukrainian wrestling Navikov will not be at the Olympics as another star wrestler Zhan BELENIUK (UKR) is scheduled to wrestle in the Japanese capital city.

Michal TRACZ (POL) wrestled Ekrem OZTURK (TUR) in the 60kg final and held on for 3-2 win for his home country. In the nordic style bracket, he won two bouts to reach the semifinal in which he came out on top against Mukhammadkodir YUSUPOV (UZB) 3-2.

Ozturk had a back-and-forth semifinal against Olivier SKRZYPCZAK (POL) as the two scored 26 points in the stipulated six minutes. In the end, Ozturk won 15-11 to reach the final.

Gevorg SAHAKYAN (POL) won the second gold medal for Poland as he defeated Mirzobek RAKHMATOV (UZB) 4-3 in the 72kg final.

The Pole had some tough bouts throughout the day as he began with a 3-1 win against Krisztian VANCZA (HUN) 3-1 before pulling through a 1-1 win against compatriot Roman PACURKOWSKI (POL).

From the other side, Rakhmatov defeated Juan AAK (NOR) 9-0 in the qualification before clinching a 7-0 win over Mateusz BERNATEK (POL) in the quarterfinal. He had a tough one against Cengiz ARSLAN (TUR) in the semifinal but managed to pull off 5-4.

Uzbekistan did get it's gold medal on Sunday as five-time ranking series finalist Islomjon BAKHRAMOV (UZB) managed to hang on and defeat Ayata SUZUKI (JPN) 5-3 in the 63kg final. Suzuki was awarded a point for Bakhramov's passivity and he later got an exposure from par terre to lead 3-0. But Bakhramov reversed it and completed a head-pinch to make it 3-2.

In the second period, he got the point for Suzuki's inactivity and then exposed him from the par terre position to lead 5-3. The Japanese did try quite a few arm throws but failed to get any points.

From Japan, world champion Kenichiro FUMITA (JPN) was also scheduled to make the Poland trip but pulled out at the last moment due to unforeseen circumstances. Fumita has now not competed internationally since winning the gold medal at the Asian Championships in New Delhi in February, 2020. 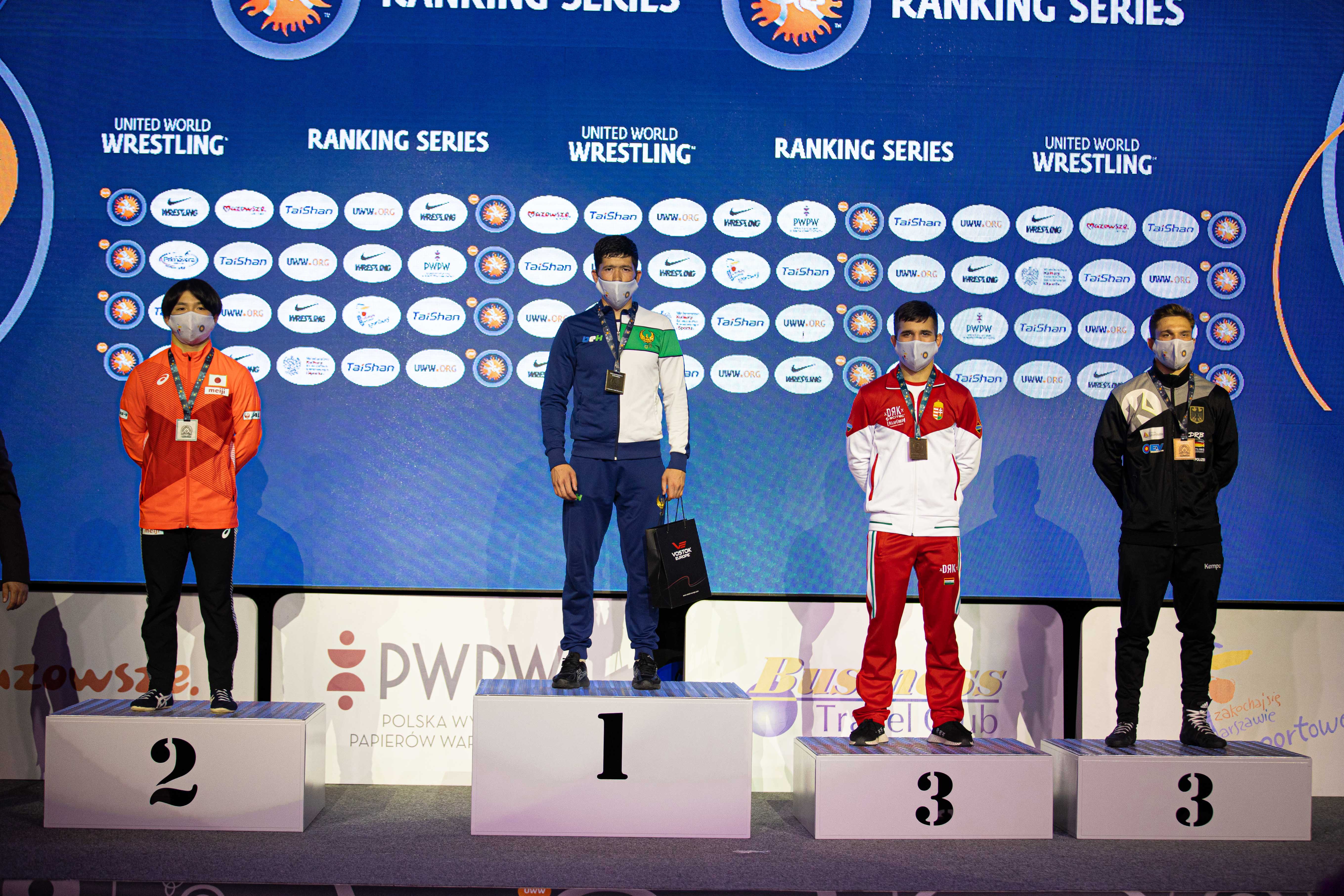