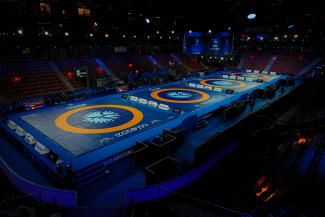 UWW revealed that Greco-Roman, women’s wrestling and freestyle will be the style-order for the 2022 edition of the World Championships.

Greco-Roman action opens the competition with four weight classes on September 10-11, before sharing the mat with women’s wrestling on September 12.

Following suit from the schedule of events from the 2019 and 2021 World Championships, freestyle action closes out the competition beginning on September 15.

For a full breakdown of the 2022 World Championship schedule, click HERE. 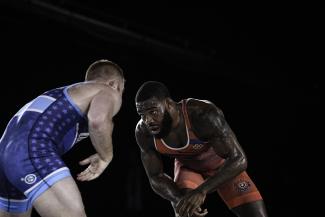 NEW YORK, USA (June 9) -- Soon after he earned his spot to represent the USA at the World Championships, Jordan BURROUGHS (USA) was asked about his decade-old international career.

Burroughs pulled out one of the many classic responses from his book. "It's difficult, but that's what we do, we do hard things," Burroughs said. "We are presented with a challenge, we prep for the challenge, with wrestling we overcome the challenge."

It's true for Burroughs.

Over the years, the London Olympic champion has been in many challenging situations both on and off the mat. But Burroughs has managed to win most, if not all. Whether it's returning from an injury to win the world title again or recovering from the loss at Rio Olympics, he has beaten domestic stars and upcoming wrestlers alike in the USA and made the world team.

Wednesday was Burroughs' attempt to make his 11th world/Olympic team and the 33-year-old did so by beating Chance MARSTELLER (USA) at 79kg in a best-of-three final in New York, USA.

“No one can beat me in match three,” Burroughs said. "[I have] a ton of respect for Marsteller. But it comes down to a lot of faith in our training, coaching staff and partners. I was prepared for a third match. But I also know that if someone beats me, especially in a series, it's mentally overwhelming for them. They have to re-prepare to do it twice in a row."

After winning the Pan-Am Championships in May, Burroughs had said that he is aware that it would be extremely tough for him to win against any wrestler.

"I am not sure who I am going to compete against," he said in Acapulco. "But I do know that whoever it is, it's going to be extremely tough. I am ready to take on any challenge, new challenge, or familiar challenge. One thing is clear -- it's not going to be easy."

Marsteller had the chance to pull off an upset of his life after forcing a decider as he won the second bout 2-2. But Burroughs used his experience to win the third 5-0 against the younger opponent to make the USA team for the Belgrade World Championships. 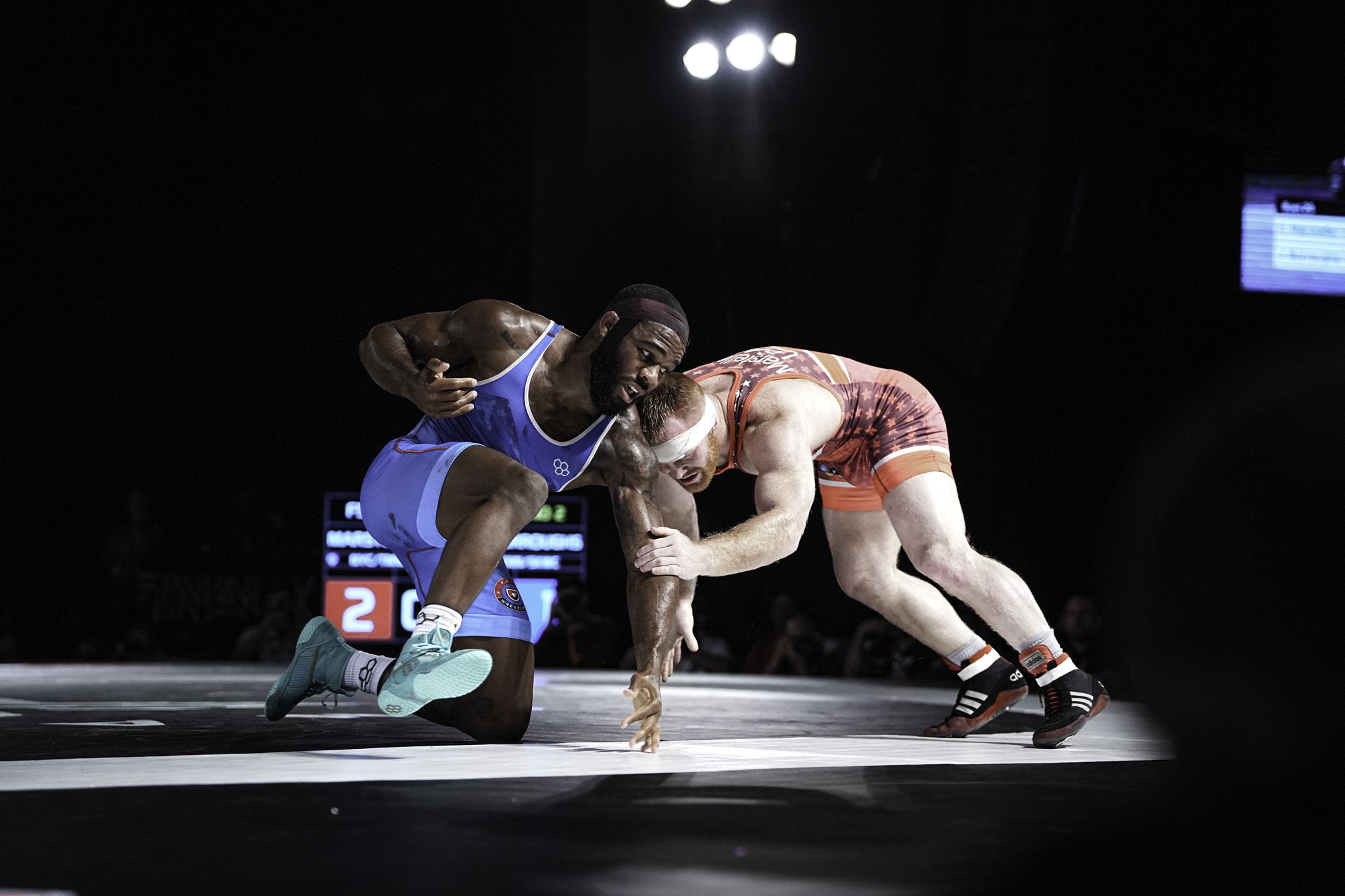 On the cusp of his seventh world title, Burroughs is entering a territory no American wrestler has before. John SMITH (USA) and Adeline GRAY (USA) are tied at six titles each and Belgrade will be a perfect opportunity for Burroughs to go past them.

The 33-year-old knows it as well. It has been his dream since winning the London Olympics. So he wants to stay focused on that goal.

"[I want to] stay focused as much as possible entering this realm of seven-time world champion," he said. "I always talk about being the greatest American wrestler of all time. But now I start to put myself in the class of all-time greats across all styles across the world. I think that's a cool thing to me that I am kind of entering this era where I have to be recognized worldwide as one of the best wrestlers. That's exciting for me. I just want to make a name for myself. Growing up I was not even the best wrestler in my street. It's hard managing to be the best wrestler in the world many times over."

Burroughs has done it six times in 10 years. He was an outsider when he won his first World Championships in 2011. A year later as a 23-year-old, he was at the London Olympics, winning the gold to be regarded as the future of the sport in the USA.

"I didn't know what to expect in Istanbul 11 years ago, wow," Burroughs had said in February. "The blessing was that I was young and naive and knew what I had. Denis TSARGUSH (RWF) was a reigning world champion in the weight class, and I had not wrestled him before. I had him in the second round."

He lost the first period to Tsargush. But in what was the beginning of a career full of comebacks, he won the second and third periods and the quarterfinal. In the final, Sadegh GOUDARZI (IRI), cheered by the loud Iranian fans, was the favorite. But Burroughs stunned him in straight periods. He also trademarked double-leg during that competition.

"I was a little nervous, to be honest," Burroughs said. "Going to that tournament gave me a lot of confidence going forward because after winning that with very little freestyle experience, I thought about what I can do if I really train full time. The body of work has been something I have been grateful for."

And if anyone thought that the World title in 2011 was a fluke, he went on to beat the same wrestlers, in the semifinals and finals, in London. 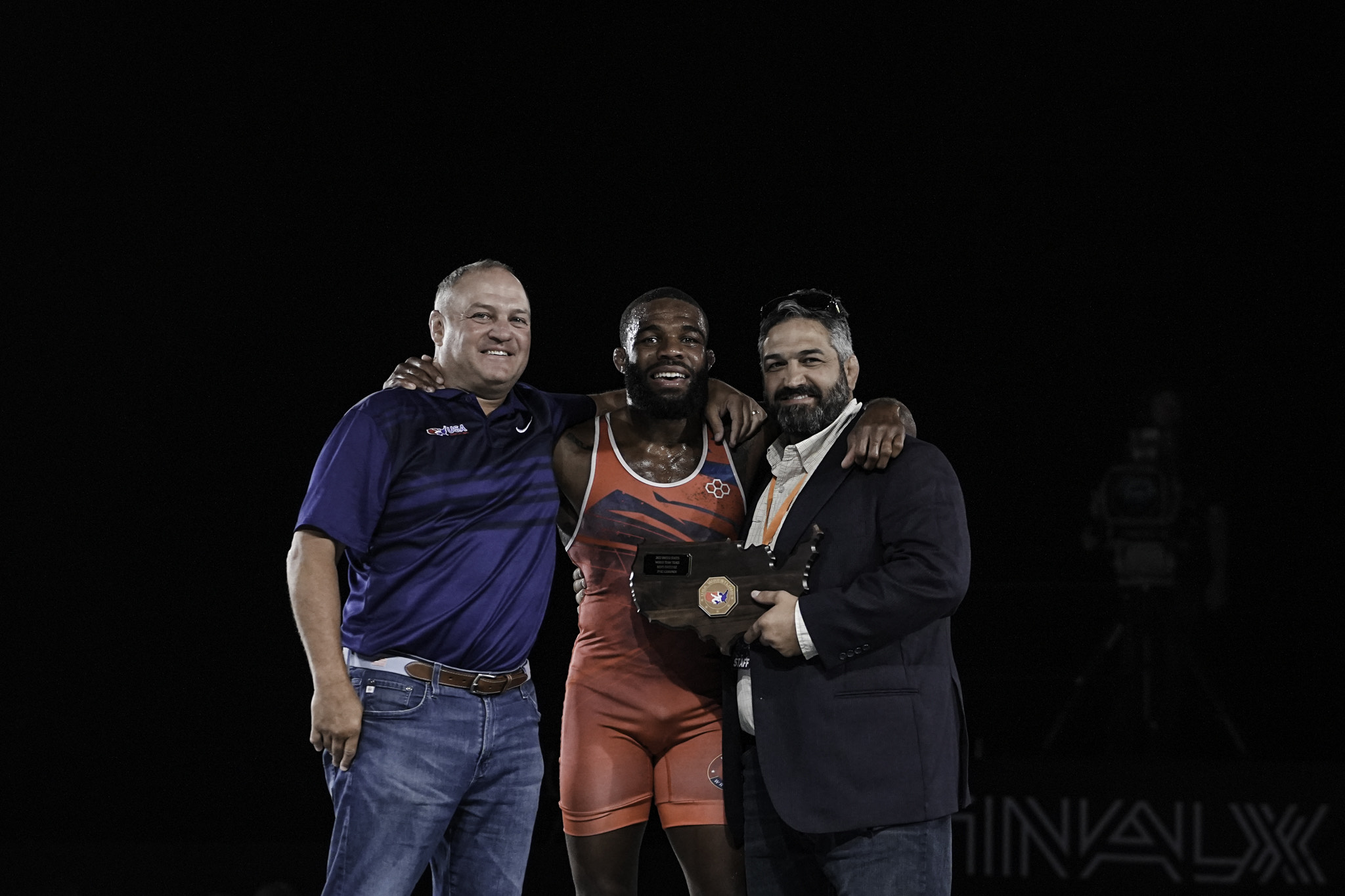 But a lot has changed since then. He is older and has commitments off the mat. He is also the father of four kids and has to devote time to his family. Going by the Twitter of his wife Lauren, he has done that successfully.

Another change Burroughs has noticed is the amount of time his opponents spend studying him as there is a lot of content available.

"The biggest difference now is that I have many obligations outside of wrestling than 2011," he said. "Now I am very familiar, there are a lot of videos on me, guys watching me wrestle. But now they want to knock me off. So I understand the position I am in."

Yet, he has managed to knock off half of the world that tried to take him down.

Burroughs, who was often termed as cocky early in his career, has grown into a wrestler who is intelligent, sharp and someone who takes fitness very seriously. His double-leg still seems to be top-class. It's not easy to remain at the top level for a time Burroughs has been.

"Faith," he said. "Consistency, surrounding yourself with great people. It's a blessing to prevent injuries but also you know just work ethic, nutrition, recovery and a lot of focus. I take care of my body. I do the right things to make sure that I stay and maintain a certain level of fitness. But also I have just been able to avoid injuries and a lot of that is luck."

While a few talk about it, the challenges he faces in the wrestling training room with age has made Burroughs make better choices regarding fitness.

"I am a much better wrestler now," he said. "I am sharper, more intelligent, more savy. Just all-around a better athlete. But again, I am older. I am 10-12 years in. It's different. You start to feel the aches and pain of longevity. I have got a lot of miles in my body in this sport."

He also acknowledged to have not sustained any career-threatening injury.

"I've been blessed to not sustain anything crazy," he said. "I had a broken ankle, torn calf. But other than that I kind of dodged a lot of bullets in the crazy positions I have been in."

While it seems that Burroughs has had much success, he has had his fair set of challenges and heartbreaks on the way.

Like the one in Rio or losing to Zaurbek SIDAKOV (RWF) at back-to-back World Championships in 2018 and 2019. Or when he failed to make the USA team for the Tokyo Olympics.

But every time he has his back against the wall, Burroughs finds a way to bounce back stronger.

Remember the 2017 World final against the then Russia-represent Hetik TSABALOV (SRB)? Burroughs answered his critics with that epic performance which also helped the USA win the team title in 2017. He managed to win back-to-back bronze medals in Budapest and Nur-sultan.

Internationally, he has lost to only two wrestlers since Rio Olympics. Frank CHAMIZO (ITA) and Sidakov have defeated Burroughs twice each in the last six years.

But since moving up to 79kg, he is yet to drop a bout. Last year in Oslo, he managed to capture his fifth world title and first in a new weight class at 79kg. While it is not at the Olympics, the category gave Burroughs a chance to enjoy the process again.

"People don't take it [79kg] seriously because it's not an Olympic weight," he said. "It's given me some rejuvenation late in my career. I'm 33-years-old and will be 34 in four months [now one]. I don't have to cut [too much weight]. I get to eat the things I want and training is more fun for me."

As he has never backed down from challenges in the past, Burroughs is getting ready to overcome this one as well.

"It's effort, attitude and a warrior-like spirit," he said. "I am going to do my best to make the team. It's going to be a tough cut for me, but I'm committed."